considered for operation in Galena, Alaska. This review is necessarily limited in its scope because no

detailed design package for this experimental reactor. The safety questions that I was unable to find

answered in the publicly available information are described below.

capital cost so that the 4S can have a reference site and operation experience.” 1

Alan Shepard did not have to buy a ticket for his Freedom 7 first US manned space flight, it is rare that

people pay for prototypes. Once the bugs have been worked out and the risks reduced, companies then

“Toshiba currently is conducting engineering work to complete the reactor and plant designs.

Therefore, if the first operational unit is installed at a site such as Galena it would be considered

a “reference” rather than a “prototype” or “demonstration” plant. … The assumption that the

4S would be a reference plant is subject to some question by U.S. National Laboratory staff.” 2

American backyards, particularly without qualifications and conditions such as those acknowledged by

“For a first-of-a-kind installation in Galena, licensing requirements may include extensive

analysis of the reactor after a short run-time (i.e., 1 to 5 years). In this case the reactor would be

changed out at that interval and returned to Toshiba for analysis.” 3

reactor laboratory, that government is likely to impose conditions to gauge how well the experiment is

progressing. That American city might be inconvenienced by its power plant being unavailable during its

the United States at test facilities, with over 300 reactor years of operational experience.” 5

The first statement is either horribly misinformed or an outright falsehood. The history of sodium-cooled

reactors in the United States had very serious incidents involving the reactor core. For example, there

were the following two events involving partial meltdown of the reactor cores of sodium-cooled reactors:

• In July 1959, the sodium-cooled nuclear reactor at the Santa Susana facility outside Los Angeles,

California, experienced overheating causing damage to roughly one-third of the fuel elements in

the reactor core. The design of this reactor was very similar to that proposed for Galena in that it

• In October 1966, the sodium-cooled nuclear reactor at the Enrico Fermi nuclear plant outside

more than 40 years ago. But that distant past is explained in large part by proper context for the second

misleading statement quoted above. That statement implies that sodium-cooled reactors are tried and

proven. The reality is that sodium-cooled reactors are a tried and rejected technology. At the end of 2005,

there were 444 nuclear power reactors operating worldwide. Only two (2) of these hundreds of reactors

and/or uneconomical. An abridged list of sodium-cooled reactors permanently shutdown years before

their projected ends of lifetime:

Sodium-cooled nuclear reactors may have compiled more than 300 years of operational experience, but

that history has been so troubled that country after country abandoned the technology as unviable. More

than 99.5 percent of the nuclear power reactors operating in the world today are NOT sodium-cooled.

There’s a reason for that – sodium-cooled reactor technology failed in the commercial marketplace.

core. The splitting, or fissioning, of atoms releases energy and also nuclear particles that can interact with

other atoms to cause more splitting. “Reactivity control” is the term of art applied to the regulation of the

rate of fissioning in the reactor core. According to the publicly available information, the Toshiba 4S

“A single control rod has absolute control on reactivity and power. … The core can be

scrams the reactor by either of two diverse actuators when rapid shutdown is required.” 9

It’s highly questionable that a design with this feature can be licensed in the United States. In January

1961, the withdrawal of a single control rod at the SL-1 nuclear reactor in Idaho resulted in an

uncontrolled nuclear reaction and steam explosion that killed every single person at the plant site. 10 One

that a single control rod is capable of so much reactivity control. When this lesson is properly applied, a

rate by reflecting neutrons back into the core. The reflectors are moving upward slowly in order

to compensate the reactivity loss during 30 years burn-up.” 11

maintain neutron flux and power levels. In case of electrical power loss or failure of the reflector

drive, the assembly is designed to fall to the bottom of the core. Reflector bottoming will reduce

could be mis-positioned or could malfunction to get higher than desired. The conceptual design refers to

are inherently applied on the nuclear chain reaction rate), but nothing in the publicly available information

addressed what would happen if the reflector(s) moved to their vertical limit.

in the United States.” 13 As described in the Sodium-Cooled Reactor Operating Experience section, the

of flaw-free operation. Yet such an unfounded, unjustified assumption is part of the marketing campaign:

“In all cases, the nuclear system will provide the lowest cost power to the consumer. … The

hold. … If this technology is successfully deployed in Galena, its economic viability in other

Alaska villages and elsewhere depends on the actual life cycle costs yet to be quantified.” 14

“Annual supplies and expenses are in addition to labor. Toshiba estimates about $1 million for

this line item for their 50-MW plant. Since the reactor is sealed these expenses probably relate

almost exclusively to the steam piping and turbine/generator systems. … Lacking specific data on

this point, we have assumed that annual supplies and expenses are one-half the amount estimated

Many things can go wrong, yet the feasibility studies ignore rather than discount this possibility. The cost

and impact of things going wrong can be extremely significant. For example, consider this feature of the

“There is no design capability to open the reactor vessel, for any purpose other than at the

The history of nuclear power is filled with “surprises” that required retrofitting to correct. Many of these

• Unexpected thermal stresses caused cracking and failure of the hold-down brackets for the nonmoving,

Each of these, and many similar, “surprises” required costly and time-consuming repairs – repairs that

were conducted by opening the reactor vessel at the plants and performing repairs in the field. Obviously,

thing to be dug up and shipped back to the factory.

The Toshiba 4S design is far from tried and true, yet its 30-year life at Galena relies on the extremely

operate in the United States. Among the many things they have in common is the lack of blackstart

capability. While each of these nuclear power reactors is at a plant that generates electricity, NONE can

startup without the power provided by the electrical grid. The nuclear power reactors have onsite

emergency diesel generators to provide backup power in event the electrical grid is unavailable, but the

These US nuclear power reactors are like gasoline-powered motor vehicles with automatic transmissions.

When the gasoline engine is running, it makes enough power to move the vehicle while also generating

electrical power for the radio and other equipment. But these vehicles need power from a battery to start

up the gasoline engine, just as US nuclear plants need power from an electrical grid to start up the nuclear

Galena has no connection to an outside power grid. 20 The publicly available information does not

indicate whether the Toshiba 4S design has blackstart capability. The publicly available information does

imply the need for electrical power to startup the Toshiba 4S reactor. For example:

of sodium drums and transfer the molten sodium to the respective heat transfer systems. The

vessel. It also provides the capability to transfer and purify fresh sodium prior to plant start up.”

The diesel generators which the Toshiba 4S reactor would replace, have blackstart capability. The diesel

require backup diesel generators, or other means, to enable them to startup. It’s not apparent that the cost

of providing blackstart capability was factored into the economic analysis of the “free” reactor.

nuclear power reactor design at this time. No reactor like it has ever operated and the company still has

considerable homework left to do on the reactor’s engineering. From the information that is publicly

the community. While “perfect operation” of the first unit off the assembly line is theoretically possible,

no reasonable person would take that bet.

Brian Hirsch, Development Director Rob Rosenfeld, Alaska Regional Director Jon Waterhouse, Solid Waste Program Manager Yukon River Inter-Tribal Watershed Council 725 Christensen, Suite 3 Anchorage, Alaska 99501 December 11, 2006 SUBJECT: REVIEW OF TOSHIBA 4S SODIUM-COOLED NUCLEAR POWER REACTOR PROPOSED FOR GALENA, ALASKA Dear Gentlemen: I reviewed publicly available information on the Toshiba 4S sodium-cooled nuclear power reactor being considered for operation in Galena, Alaska. This review is necessarily limited in its scope because no Toshiba 4S reactor has ever operated any where on the planet and the company is still developing the detailed design package for this experimental reactor. The safety questions that I was unable to find answered in the publicly available information are described below. FIELD EXPERIMENT OF PROTOTYPE REACTOR DESIGN The publicly available information indicates that the Toshiba 4S reactor would be provided to Galena at an apparent bargain price: “Toshiba has approached the City with the offer to provide the reactor and power plant at no capital cost so that the 4S can have a reference site and operation experience.” 1 Just like Chuck Yeager did not have to buy a ticket for his X-1 flight in breaking the sound barrier and Alan Shepard did not have to buy a ticket for his Freedom 7 first US manned space flight, it is rare that people pay for prototypes. Once the bugs have been worked out and the risks reduced, companies then market production models to commercial customers. The proponents of the Toshiba 4S design (and it’s worth noting that this design is not the next evolutionary step from a Toshiba 1S, Toshiba 2S, and Toshiba 3S series of proven designs; this design currently exists only on paper and in cyberspace) want to skip some steps in the normal development process for new technology: “Toshiba currently is conducting engineering work to complete the reactor and plant designs. Therefore, if the first operational unit is installed at a site such as Galena it would be considered a “reference” rather than a “prototype” or “demonstration” plant. … The assumption that the 4S would be a reference plant is subject to some question by U.S. National Laboratory staff.” 2 1 U.S. Department of Energy, 2004. “Galena Electric Power – a Situational Analysis,” Draft Final Report. December 15, page 7. 2 U.S. Department of Energy, 2004. “Galena Electric Power – a Situational Analysis,” Draft Final Report. December 15, page 32. Washington Office: 1707 H Street NW Suite 600 • Washington DC 20006-3919 • 202-223-6133 • FAX: 202-223-6162 Cambridge Headquarters: Two Brattle Square • Cambridge MA 02238-9105 • 617-547-5552 • FAX: 617-864-9405 California Office: 2397 Shattuck Avenue Suite 203 • Berkeley CA 94704-1567 • 510-843-1872 • FAX: 510-843-3785 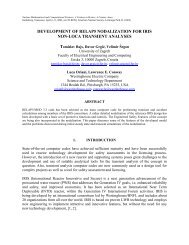 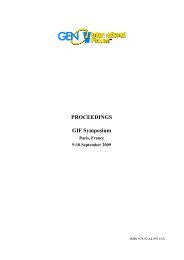 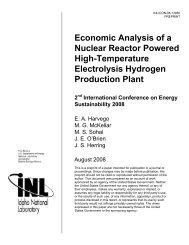