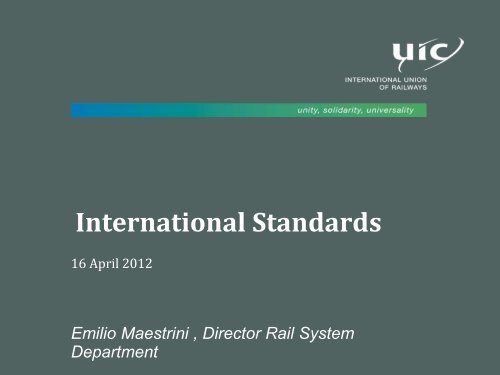 UIC and the development of worldwide railway standards - Unife

UIC and the development of worldwide railway standards - Unife

1. The Reasons for Standardisation

Standardisation facilitates the free movement of people and goods.

are the items that pivot around

benefiting economy as a

whole and consumers in

the development of new

and improved products or

The Reasons for Standardisation

The Standardisation System should be a voluntary

system, organised under principles such as

integration of people with disabilities

It is necessary to ensure that the role

and the input of public and societal

stakeholders in the elaboration of

Right Roles in the field of Railway Standardisation

Reestablish the ROLES of the

Undertakings) & IMs (Infrastructure Managers) supply the services. They are involved

in the Quality process .

The NSBs (National Safety Bodies) have a role of definition, verification and control of

the requirements which shall enhance safety.

(Notified Bodies), thus Standards are a value for safety .

Determine a STEP CHANGE in the Railway Transport:

‣ to define the minim level of quality of the services

‣ to analyse the sustainability to get the necessary resources

Unify pre-competitive functionalities and their measurement through RAMS

Standardisation arrives to the processes and, at last, to the measurability indexes (Key

Performance Indicator - KPI) on which to build the business cases ( Asset

Management) and consequently offer products in a competitive manner.

1. Need of Standardisation Activity for the new demands of the market .

3. International Railway Standards define and rely upon a description of the Railway System based

on Level Systems and Subsystems mutually linked by defined Interfaces.

4. Systems, Subsystems, Components and Interfaces are in the main interest of UIC Members because

they are the main entities in charge of the production of the Railway Service . The UIC G.A. asked

find out the most effective Leaflets that are of interest to Members.

To ensure a modern

700 UIC Leaflets of which 400 in the Rail System Forum

state-of-the-art : a first step is to evaluate the development of UIC

0 Good as they are

A Direct global importance, sometimes they have to be updated with the

B Important and in need of being updated

C Outdated and to be frozen

Leaflets Groups 0 A B C D

Classification of the UIC Leaflets

Requirements to ensure safety and interoperability of the Railway System’s

Requirements of elementary items, groups of items, Subassemblies or Complete

Assemblies of Equipment incorporated into a Railway Subsystem; they generally are

the minimum unity of maintenance .

Co-operation between the UIC and CENELEC and

between UIC and CEN

One MoU is signed between UIC and the CEN (European Committee

One MoU is signed between UIC Regional Assembly Europe and the

Standardisation). The MoU is limited to Europe due to the Dresden

> The benefits expected from the use of this agreement include:

increasing transparency of work ongoing in UIC to ESB

(European Standardisation Bodies) members, and their

avoidance of duplication of work and structures, thus

allowing expertise to be focused and used in an efficient

way for the benefit of international standardisation;

The Memorandum of Understanding signed in 2005 with CEN and CENELEC

needs to be revised to include new issues.

UIC has offered a huge

number of Leaflets to be converted into European

Leaflets and a better definition of the IP (Intellectual Property).

Standardisation Body (NSB) . However, it already is an associated Member of

ISO has delivered a new TC (Technical Committee) for the Railway field, with

the participation of NSBs.

UIC offers a “world vision” for railways with a sole knowledge in the field, which

is fully supported by Oriental Countries .

For this reason UIC is looking for new agreement with CEN/CNL and ISO .

Co-operation between the UIC and UNIFE

> A TecRec is a UIC/UNIFE standard of which, the primary field of application

subsystems, and is the preferred solution by both partners for, in

Product and interface standards such as standardisation of

Acceleration and better influence over the European Standardisation

common comprehensive standard, approved by UIC and UNIFE to improve

the competitiveness of the European railway systems.

TecRecs are managed by a joint UIC/UNIFE Co-ordination Group. Priorities

Co-operation between the UIC and UNIFE

2. A technical recommendation that can be transferred to CEN

and CENELEC within 3 years (expiring after 3 years)

Co-operation between UIC and UNIFE

Agreement between UIC and ERA

cooperation in the field of GSM-R Specifications.

• Main purpose was to review the requirements defined in the EIRENE

specifications and classify them in:

a) Requirements that are relevant for the Interoperability in Europe

system for Europe and worldwide.

7.3.0 and SRS 15.3.0), including the Interoperability requirements for

Europe, gathered in the so called “ERA GSM-R Baseline 0”.

Agreement between UIC and ECC

• UIC and the ECC (Electronic Communication Committee) have signed in

European approach concerning the use of radio frequencies, in

particular in the field of present and future wireless railway

other for a better information exchange and common support.

Thank you for your kind attention 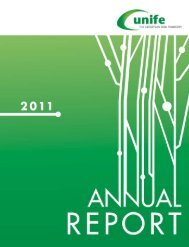 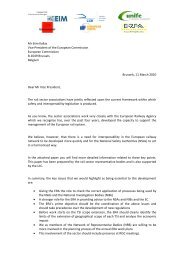 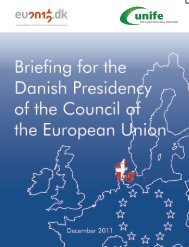 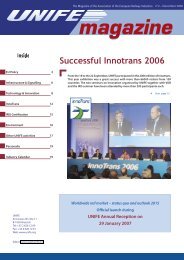 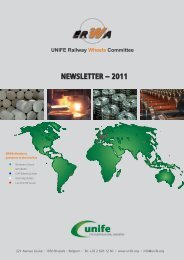 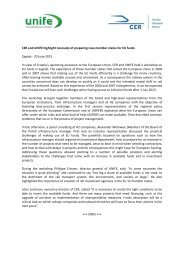 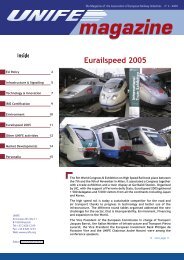 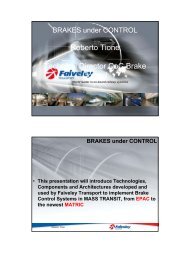 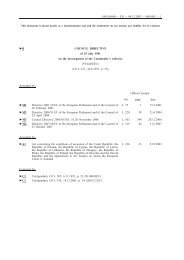 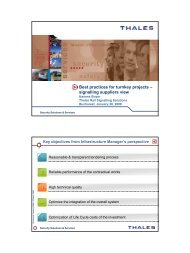 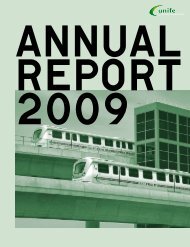 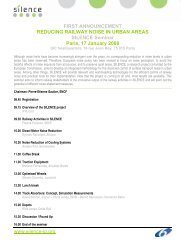 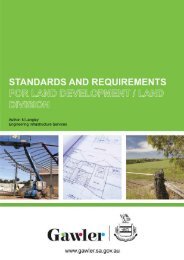 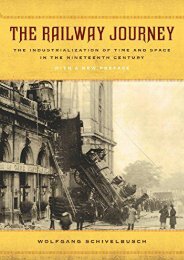 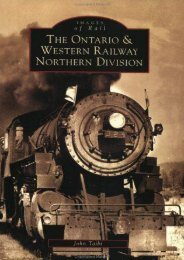 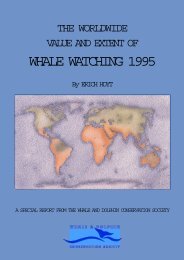 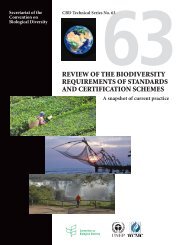 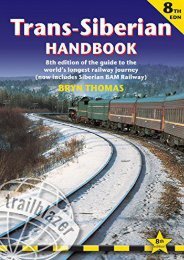 Magazine: UIC and the development of worldwide railway standards - Unife