hope took a heavy blow in

Most of us are familiar with the “Peanuts” comic strip. The lead character,

Charlie Brown, is the anti-hero. His life is one of unrequited love, a losing

baseball team, and a football yanked out from him at the last

But Charlie Brown is not a misanthrope. Surrounded by

on. The creator of “Peanuts,” Charles Schulz, speaks

through Charlie Brown: “A whole stack of memories never

“Hope” is a precious thing to reflect upon at the beginning

of a new year, as we gaze upon our “stack of memories”

from the passing year. In terms of religious liberty, hope took a heavy

blow in 2013. From the tragedy in Syria and the heavy loss of life there,

to the serious infringements on religious liberties posed by the HHS

mandate in the U.S., looking back is discouraging. It is clear that global

Yet, there is “one little hope,” as Charlie Brown says. Psalm 146

Blessed are those whose help is the God of Jacob,

whose hope is in the LORD, his God,

The maker of heaven and earth,

the seas and all that is in them,

secures justice for the oppressed,

who gives bread to the hungry.

the LORD gives sight to the blind.

The LORD raises up those who are bowed down;

the LORD loves the righteous.

The LORD protects the resident alien,

comes to the aid of the orphan and the widow,

but thwarts the way of the wicked.

The LORD shall reign forever,

your God, Zion, through all generations!

The mission of the

to promote a free

Thank you for your support of the Acton Institute. May 2014 be a year

when our stack of memories is filled with this abundant hope.

The Acton Institute has been flooded with media

requests because of the 2013 apostolic exhortation

examined the role of evangelization

in the world, the new

pope also weighed in on economic

issues and the free market. Acton’s

primary criticism of the document,

Gregg in National Review, was that

far too many unexamined economic

assumptions had made their way

into the text. One might assume from some of the

pope’s comments that the role of the state’s interest

is benign or unbiased in the world in comparison

to the free market.

on Fox’s “Your World

economy and the kind of crony or state capitalism

so clearly on display today in much of his own

“Your World with Neil Cavuto,” and

other television appearances. He

In a The Detroit News column addressing the Pope’s

Sirico said he agreed with Pope Francis when he

says “markets are not enough” but added that

it’s important to make the distinction between a

free market and the kind of crony-capitalism and

does the Pope make a distinction between what

We cannot respond with truth to the challenge

of eradicating exclusion and poverty if the poor

continue to be objects, targets of the action of the

state and other organizations in a paternalistic

and aid-based sense, instead of subjects, where

the state and society create social conditions that

promote and safeguard their rights and allow

them to be builders of their own destiny.

From Our Conference Participants

Acton University is the best seminar I

have attended: it was highly professional,

had excellent speakers, deep thoughts, but

was also warm and accessible.

The combination of networking, faith and

reason was perfect at Acton University.

Acton on Tap in Grand Rapids

At the most recent Acton on Tap in downtown

of the Heidelberg Catechism.” This year marks

the 450th anniversary of the publication of this

1563. Although not primarily an economics text,

the catechism does have a number of significant

things to say about economic activity and material

prosperity. In his remarks, Ballor explored the

origin, essence, and goal of economic activity as

taught in the catechism. Referring to Lord’s Day

50, which treats the fourth petition of the Lord’s

Prayer, “Give us this day our daily bread,” Ballor

located the divine origin of material blessings in

the catechism’s understanding of God as “the only

source of everything good.”

The next Acton on Tap, scheduled for February 4

will address the growing threat to religious liberty.

Nothstine will discuss the ideas and tradition that

as well as how to handle the current threat today.

on Tap on the topic of “Learning the Lessons of

Ancient Rome.” If you have questions about Acton

will deliver a lecture on “Why Libertarians Need

God” at the Grand Rapids office. The January

The essence of economics is contained in the

catechism’s exposition of the 8th commandment

prohibiting theft, which includes the positive

responsibilities of stewardship and the need for

each person to “work faithfully” so that in the creation

of wealth and the service of others we might

“share with those in need.” The goal of economic

life is represented in the catechism’s teachings on

the Sabbath, particularly as understood in the obligation

to more and more rest from our “evil ways”

in anticipation of the eternal rest of the new heavens

and new earth. The meeting concluded with

a Q&A period, in which the participants discussed

the significance of the catechism, the responsibilities

of individuals, churches, and governments to

assist those in need, and a number of other issues.

Audio of the evening’s talk is available at the

sense in a theistic context. Jay W. Richards is the

Distinguished Fellow at the Institute for Faith,

and author of Money, Greed, and God, which won

a Templeton Enterprise Award in 2010. Future

2014 lecturers include Raymond Arroyo of EWTN,

Lawrence Reed, and Chip Mellor, who is the

president of the Institute for Justice (IJ). The entire

Acton Lecture Series schedule can be viewed at

In December of 2013, the Acton Institute started

is the first decentralized digital currency that is

created and exchanged electronically. Dwolla, a

United States only company is a payment network

that allows people to send, request, and

accept money with just a flat fee of 25 cents and

no fee for transactions under $10. Both forms of

exchange are hailed for some as a new, cheaper,

and easier way to transfer money in the global

the time, the donation was equivalent to a million

The decision to accept Bitcoin has garnered positive

and MLive have both chronicled Acton’s decision

the increasing number of companies and

“Because of the built in privacy strength of the

to the libertarian viewpoint if we can explain

it properly.’ There is virtually no risk of identity

theft through the currency transaction,” declared

is considered a positive development in repressed

countries as BitCoin can bypass blocks in payment

Acton’s executive director expanded on the

We want to be an organization that always

encourages free expression and speech too. As

we expand opportunities to raise funds and

promote a free and virtuous society, we vow to

continue to do the very best at being stewards

of your hard earned gifts. Since we promote

liberty and freedom here at Acton, it makes

sense to offer increased freedom in the ways

that our donors are able to give.

One of the positives of BitCoin and Dwolla is

Acton in the News

“Let’s make sure that what we want

is what is really good for us.”

article in The Gospel Coalition.

Title: Tips for Jesus, the Wolf of

Program: Your World with Neil Cavuto

Title: Sabbath Rest and the Moral

The Acton Institute depends on the generosity

of supporters like you. If you have not donated

helping us meet our goals! Your help makes

possible our mission to promote a free and

virtuous society. You may choose to donate

using the envelope provided, or you may visit

online. We send our heartfelt thanks to those

who have been so generous in the past with

your strategic support as well as your prayers.

You have a broad vision and a generous heart.

the work of the Acton Institute? Use our

on our programs and activities.

Thanks for promoting freedom and virtue!

Own all of the lectures from Acton University on a USB flash drive with this inexpensive bundle. Valued

at $179, these lectures were recorded from Acton University sessions from 2010 to 2013. The flash drive

comes with lectures organized by year and each includes the lecturer and course title in the file name.

With the help of our guide, Pastor Jim Liske, along with seven inspiring stories and key biblical insights,

takes us on a journey to explore God’s purpose for our stewardship of all that He created. Ultimately, stewardship

is about doing what God calls each of us to do, so we can become the people He created us to be.

Get Your Hands Dirty: Essays on Christian Social Thought (and Action)

This volume brings together a decade of reflection at the intersection of culture, economics, and theology.

Addressing topics ranging from the family to work, politics, and the church, Jordan J. Ballor shows how

the Christian faith calls us to get involved deeply and meaningfully in the messiness of the world.

Money, Greed, and God: Why Capitalism is the Solution and not the Problem

Does capitalism promote greed? Can a person follow Jesus’ call to love others and also support capitalism?

Was our recent economic crisis caused by flaws inherent to our free market system? Jay Richards presents a

new approach to capitalism, revealing how it’s consistent with Jesus’ teachings and the Christian tradition.

For our fastest service and a complete list of titles, visit store.acton.org

Money, Greed, and God: Why Capitalism is the Solution and not the Problem $12.00

Make checks payable to “Acton Institute.” For orders in the United

shipping; plus US $1.00 for each additional item. Overseas orders:

Jay Richards to Speak at the Acton Lecture Series

Ray Nothstine to Speak at Acton on Tap

Raymond Arroyo to Speak at the Acton Lecture Series

Lawrence Reed to Speak at the Acton Lecture Series 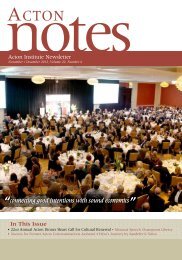 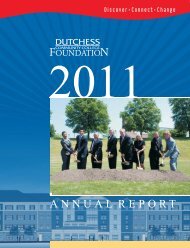 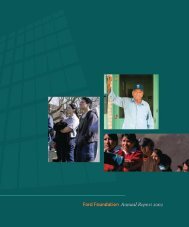