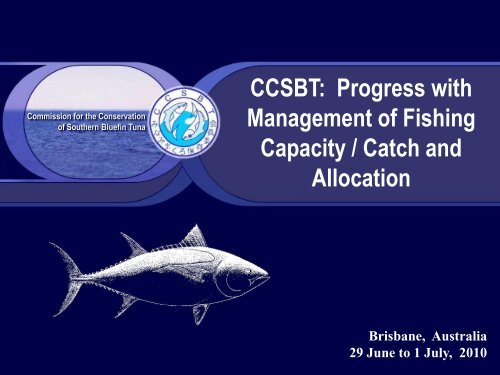 Commission for the Conservation

Management of Fishing Capacity and Catch

• CCSBT’s primary conservation measure is the setting and

allocation of a Total Allowable Catch (TAC) for SBT.

o All Members and CNMs have been granted an allocation of the TAC.

discouraged from fishing for SBT by being denied access to SBT

markets of Members and CNMs.

• CCSBT has not managed fishing capacity directly. Instead:

o Individual Members & CNMs decide how much fishing capacity is

appropriate for their allocation of the TAC.

Some have ITQ systems.

Some have undertaken capacity reduction programs.

‣The remaining Member and the 3 CNMs take SBT as a bycatch.

over the last 6 years.

Number of Vessels >100t Authorised to Fish for SBT

Decisions taken for future management of the catch

To be based on a Management Procedure (Decision Rule):

• The CCSBT Management Procedure (MP) is scheduled to be

exceptional circumstances such as recruitment lower than

basis for TAC setting for 2012 and beyond.

• In the event that an MP cannot be finalised by 2012, a reduction

CCSBT decides otherwise based upon the new stock

• Appropriate MCS measures at both the RFMO and national

levels are essential to quantify and control the catch for TAC

• CCSBT is also in the process of conducting a compliance risk

Allocation of the TAC – the Convention

• The CCSBT’s Convention specifies six matters to be

considered when deciding upon allocations:

o The need for orderly and sustainable development of southern bluefin

o The interests of Parties through whose exclusive economic or fishery

bluefin tuna including those which have historically engaged in such

fishing and those which have southern bluefin tuna fisheries under

o The contribution of each Party to conservation and enhancement of,

o Any other factors which the Commission deems appropriate.

Allocation of the TAC – in practice

the convention, but it has not developed a formal procedure for

determining the size of allocations. In practise:

o Allocations for new entrants have been determined through negotiation

and taking into account recent past catches and individual

degree been established with respect to previous allocations, but also

with negotiation depending on circumstances at the time.

o Decisions on allocations to CNMs are reviewed on an annual basis.

year period (but subject to exceptional circumstances such as declining

Allocation of the TAC – recent developments

• From 2006, the allocation to Members has evolved into 3 tiers

of allocation. This has provided some flexibility for allocation

o Nominal Catch Limit: Long-term allocation before any reductions are

applied and is used in determining the financial contributions to the

period. This is not necessarily in proportion to the nominal catch.

voluntary reductions for a specific period.

• In October 2009, a long-standing allocation issue (since

CCSBT 1 - 1994) was finally resolved, resulting in changes to

• The CCSBT has agreed to start discussion on quota allocation

Proportional "Effective" Allocations of the TAC

Commission for the Conservation

• CCSBT manages the SBT catch primarily through a global TAC and

allocations of that TAC instead of direct limitations on fishing capacity.

concerns with the state of the stock.

• The number of authorised fishing vessels has also declined.

• An MP is planned to be the basis for future setting of the TAC.

• There are no formal procedures for allocation of the TAC, but the

Convention specifies matters that must be considered. Catch history and

past allocations have had a significant influence on allocation decisions, but

scheduled to commence in 2010.

Commission for the Conservation of Southern Bluefin Tuna <strong>CCSBT</strong>: Progress with Management of Fishing Capacity / Catch and Allocation Brisbane, Australia 29 June to 1 July, 2010 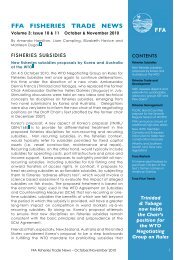 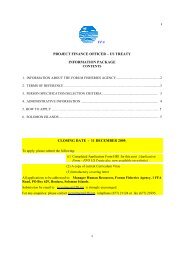 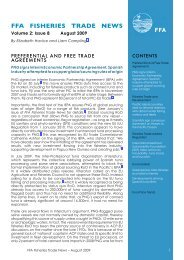 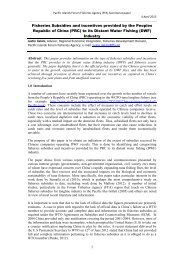 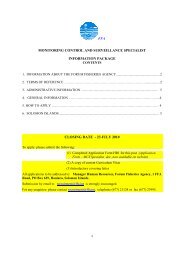 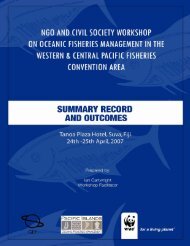 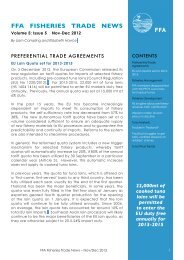 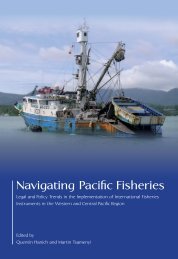 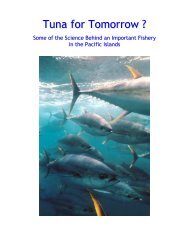 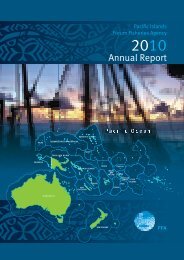 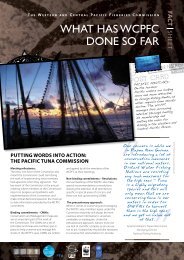 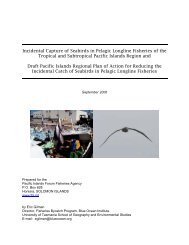 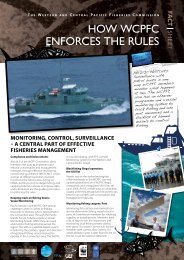 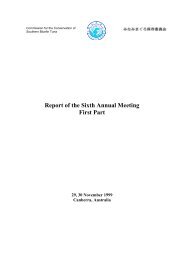