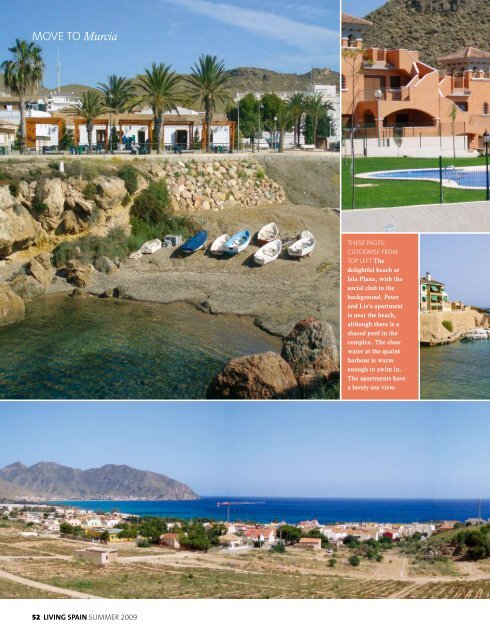 Isla Plana, with the

social club in the

is near the beach,

although there is a

shared pool in the

water at the quaint

enough to swim in.

retired to Spain, searching for sun and sea,

ease of travel and a stable civilised environment.

Until about eight years ago, Peter

Raymond would not go to Spain. His

image of the country was raucous

tourists in large resorts on the costas.

Persuaded by his wife Lis that the country had

more to offer, the couple flew from Manchester to

Alicante in search of a new home in the sun. They

rented a car for a week, driving down the coast from

Alicante as far as Aguilas, visiting every building site

in search of a three bedroom apartment with a pool.

They didn’t find the home of their dreams, instead

they discovered the sun-drenched shores of the Costa

Cálida. They were so impressed with the area, they

bought a villa off-plan at Camposol near Mazarrón,

about 20 minutes drive inland in a new development.

During their first visit they discovered that Spain

was well organised, friendly, with many English

speakers. “We could very quickly find our way

around a Spanish menu, although we didn’t always

get quite what we expected in those early days!”

Lis recalls. “We are now more experienced and we

certainly enjoy the varied local cuisine offered in the

and affordable property prices, with a cheaper cost of

living than they had grown accustomed to in the UK.

and the use of notaries (giving power of attorney

to a nominated person) to be efficient, low in cost,

and useful for cutting out much of the dreaded

bureaucracy they were used to. With all the bad

press in the UK of British property owners losing

properties and having problems with planning

and Lis decided to travel by rail when house-hunting,

leading them to search for a home with close access

to an efficient rail system. They have done over 42

round trips, using Eurostar, between London and

to Madrid, and when the pair lived in Camposol, the

local train from Madrid to Murcia. Now they travel

to Cartagena, to their home in Isla Plana, where they

Their new penthouse apartment has three

and shared pool close to the typically old fashioned

Spanish village of Isla Plana. The village has a

variety of restaurants and bars to while away the

when not entertaining on their private roof top

solarium. It also has a small selection of shops

including a bank, a pharmacy, mini markets and

a hairdressing salon. All the basics needed for day

to day living, while Puerto de Mazarrón, less than

Cartagena city is 20 minutes away and Murcia just

Friends from home make frequent visits, many of

whom have fallen in love with Peter and Lis’s new

home and the numerous sandy beaches which make

up the Bay of Mazarrón. The area is particularly

lively in July and August thanks to the influx of

the area “a great buzz,” according to Lis.

and inaccessibility have not affected Peter and Lis.

“Anyone who doubts the service here needs to make

a visit and check it out for themselves. During our

eight years here, we have seen the building of high

roads in and around Mazarrón, toll roads and

The new infrastructure has made the Costa Cálida far

who has found rail travel to be cheap, comfortable

and interesting, some services even showing films to

the UK for the same services!”

Although electricity is expensive, the Raymonds

have found all other local public services to be

fuel costs, and more affordable eating out are just

some of the benefits, despite the value of the euro.

In fact they estimate that the overall cost of living in

Spain compared to the UK is about 25% lower. “The

council tax comparison is always one we amaze our

or less the same services! And for that we also get

our refuse collected daily… yes I do mean daily!”

It is not without its problems though, as many

Brits who have gone there to make a new life will

know. Electricity and water supplies, which are

coves and even an old

very reliable in the UK, are frequently disturbed.

supplies to the whole of the south eastern coast is

one that needs addressing urgently. The recently

built desalination plant at Isla Plana near our

new apartment is one solution for our area and

The poor opinion of the Spanish health

System held by many Brits is not shared by this

pair of expats, finding local clinics and ‘state of

the art’ hospitals in Murcia and Cartagena to have

“The quality of life and cost of living are

excellent and the final ingredient of the sun

Spain an ideal country to live in.”

helping you find your ideal property in Spain.

There are many first class builders, whose build

woodwork and an abundance of electrical sockets.

There are however some very poor quality builders

who create both a bad image for Spain, and real

problems for the British people who live here.

local knowledge are important when buying in

Spain, but the notary system is a great help in

this regard. When we bought our most recent

property in Isla Plana, we bought it through the

locators – ADS property, run by the husband and

wife team Pat and Maura Dunne. They moved to

Spain and set up this business to offer prospective

clients the type of service that we have all come to

expect. Their local knowledge is second to none

and personally we prefer to deal with smaller

companies where one can build a personal

relationship and be treated as a valued customer.

Spain is a foreign country, and without

speaking the language, life can be difficult. It is

incumbent upon anyone deciding to live here

to learn the language, but you should use

the facilities of a translator where necessary.

Language is no real barrier for anyone

determined to live in the country, but the local

making an effort to learn their language.

We do find some of the racism at football

matches both surprising and disappointing,

given Spain’s history being so tightly interwoven

with Moorish tradition. With the country’s rich

history of global trade and colonisation of

and Muslim communities of Cartagena, this

issue is a surprise and difficult to understand,

but needs addressing to avoid any further

Spain is a wonderful and civilised country,

beaches and a marvellous climate, although

no country is without its faults. Spain and the

Costa Calida are well worth visiting, and indeed

moving to! Don’t just take our word for it,

come on down and see for yourself!

MOVE TO Murcia THESE PAGES, CLOCKWISE FROM TOP LEFT The delightful beach at Isla Plana, with the social club in the background. Peter and Lis’s apartment is near the beach, although there is a shared pool in the complex. The clear water at the quaint harbour is warm enough to swim in. The apartments have a lovely sea view. 52 Living Spain SUMMER 2009 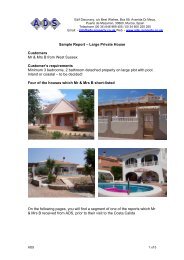 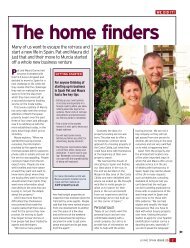 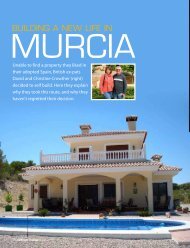 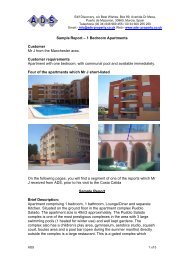 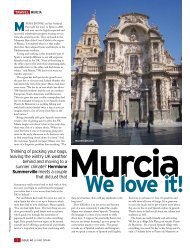 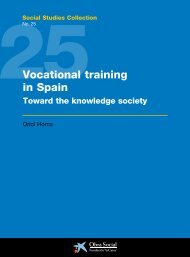 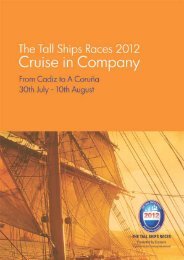 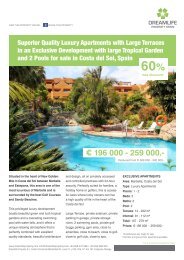 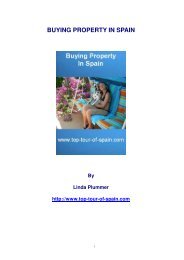 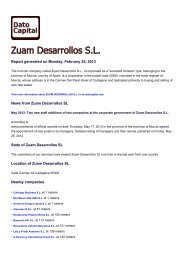 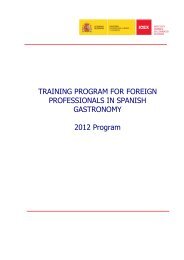 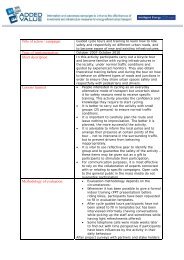 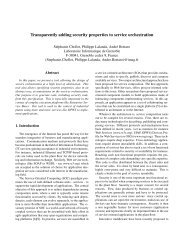 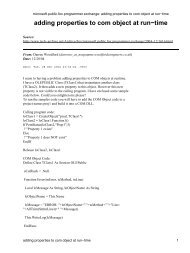