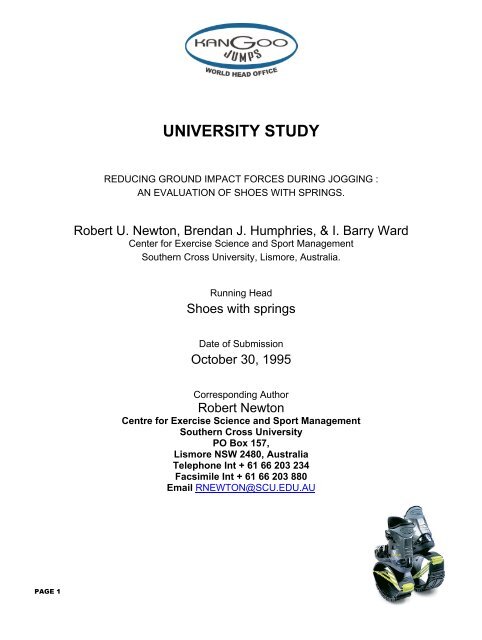 AN EVALUATION OF SHOES WITH SPRINGS.

Impact forces experienced during running have been recognised as a

spring attached to the sole of the shoe. The aim of this study was to investigate

produced during the support phase of jogging. Seventeen male and seventeen

female subject participated in the study. Each completed three trials jogging over

Jumps. Vertical ground reaction force was measured at 750Hz and normalised to

the subject’s Body weight. MANOVA with repeated measures followed by

univariate ANOVA tests were used to determine the effects of the shoe type. A

criterion alpha lever of p ≤ 0.01 was used There was a significant multivariate

different between the conditions. It was concludes that the Kangoo Jumps

significantly reduced the impact forces experienced while jogging. Wearing such

shoes may have application for the recreational jogger, cross training for

competitive athletes, or as a rehabilitiation modality for patients with lower limb

Under normal circumstances of running, jumping and bounding, the elastic

compliance of a sports shoe and the internal structures of the foot, such as the

arch and supporting tendons, reduce impact forces but provide only 40 to 65%

Invertigations with regards to impact forces have reported that between 27%

result of external forces (clement et al., 1981). Other studies have also shown that

between 21% and 50% of tennis players are injured per season (Kuhlund et al.,

1979) as a result of excessive forces. Additionally, research involving the military

Typically, when running, bounding or jumping, the musculature and joint

the body. However, it has been reported that the neuromuscular system has a

limited reaction time response, between 50 to 75 ms, to forces applied to the body

applied to the musculature prior to the response of the neuromuscular system, the

muscles involved are unable to absorb the shock of landing. This initial sharp

injuries occurring as a result of impact landings include cartilage degeneration

are referred to as passive impact forces (Ricard & Veatch, 1990). It is these

musculature and skeletal systems (Ricard & Veatch, 1990). The impact forces that

between several mechanical parameters. The height of the stride, jump of bound

work leading to toe off. Any device which could attenuate the impact forces

injury risk during recreational activities and also rehabilitation from injury.

Recently, there has been a fun and fitness shoe developed, the Kangoo

Jumps shoe (Figure 1), that would appear to attenuate the damaging effects of

high impact forces. The shoe is constructed in a similar fashion to that of an inline

roller skate with the exception of wheels and bearings. Under the shoe is an

eliptical arch stretching from the toe to the heel of

The shoe that is bisected with a removeable band. At each depression of the arch

the band absorbs the energy and returns it in the form of positive work. The

training and rehabilitation need to be investigated. Injury to the lower extremities

aims to improve muscle function, coordination, and cardiovascular fitness without

impeding recovery or exacerbating the injury. The problem is to provide ground

based exercise while maintaining a low impact environment.

Therefore, the purpose of this study was to investigate the effect of wearing

the Kangoo Jumps on the ground impact forces associated with jogging. Particular

been shown to be associated with injury.

take part in the study. The subjects were all undergraduate students and none

respectively. The study was approved by the Ethics Committee of the Southern

Cross University, and all subjects signed an informed consent document prior to

the commencement of testing.

The subject’s age, height, weight, and shoe size were recorded. The subject

while trying to ignore the force plate, that is, without attempting to target the plate.

and continued to jog for 10 m past the force plate. This was to ensure a

consistent gait pattern when crossing the plate. If the subject missed the plate or

the foot contacted the edges of the plate, the starting position was moved back by

the distance that the foot missed the centre of the plate and the trial was repeated.

wearing their normal training shoes. As none of the subjects had worn the Kangoo

themselves with jogging in the boots. Not until the subject was comfortable did

they begin the test trials. The order of the conditions was randomized between

subjects to reduce the possible confounding effects of learning, fatigue of

boredom. During each trial vertical force data from the force plate was collected

and stored for later analysis.

Normal Training Shoes. The subjects were instructed to wear his or her

normal training shoes. That is , the shoes they would normally wear when jogging

or playing sport. These shoes will be referred to in the remainder of this paper as

spring configuration attached to the sole. A plastic band stretches between the

hing points of the leaf springs to provide added stiffness and elastic recoil.

Different band thicknesses are available and were

recommendations. The heavier the subject, the greater the thickness of band

by means of a force platform (Type 9287) (Kistler, Switzerland) mounted level with

the surface of an articifial running track. The amplified signals from the charge

amplifiers were passed to a DT01EZ analog to digital card (Data Translation,

digitized data were stored on computer disk for later analysis. The force

measurement system was calibrated prior to each testing session. Vertical ground

reaction force was sampled at a frequency of 750 Hz.

Newtons. The following variables were then calculated to assess the impact

characteristics of the foot contact phase. Peak force was measured as the

highest force recorded. Mean force was calculated as the average force over

time curve for the contact phase. The impact over the initial 50 ms was calculated

by integrating the force time curve over the 50 ms following the start of contact.

the highest force was recorded. Contact time was the time that the foot was in

contact with the plate. The mean of the three trials for each variable was then

calculated and used in the statistical analysis.

measures and univariate ANOVA for follow-up comparisons. The criterion level for

The MANOVA revealed no significant effect of gender on the dependent

variables so the data was pooled for all subsequent analysis. There was a

1). There was no significant difference in peak force (Table 1). Figure 2 contains a

* indicates significant difference between normal shoes and the kangoo Jumps at the 0.01 level.

training shoes. The results clearly show that the Kangoo Jumps result in

To the lower limbs compared to the normal training shoes. In particular, the

result of jogging in the Kangoo Jumps.

forces are applied over a longer period of time. The force rises more gradually

after impact and as can be seen for the representative subject, the impact spike is

not observed in the Kangoo Jumps trial. Further, the time to achieve th peak

force is increased. Overall, the impact of foot strike is considerably more gentle

than that resulting from normal training shoes.

this was somewhat unexpected, particularly given that the contact time was

time, requiring less magnitude of force. The overall force was lower as indicated

by the lower mean force, however, the total vertical impulse was greater for the

Kangoo Jumps. This indicates that the subjects may have adopted a more

force was not significantly different. The effect of the Kangoo Jumps on normal

impact exercise such as recreational jogging and cross training for athletes. The

activity without the impact injury risk inherent in their usual activity or sport.

Further, there may be application of these shoes in rehabilitating patients with

recovering muscle strength, and maintaining cardiovascular fitness, but in a low

impact situation. Jogging with Kangoo Jumps may be a good intermediate step in

rehabilitation process between non-support work and fully loaded running. Such

The wearing of Kangoo Jumps rather than normal running shoes when

contact which have been reported to result in injuries to the lower extremities.

Therefore, the Kangoo Jumps may have application for recreational jogging as

extremity injuries. Further research work is required to assess the changes in gait

pattern that the Kangoo Jumps may produce, energy efficiency of jogging in the

Kangoo Jumps, and the efficacy of using them in the rehabilitiation setting. 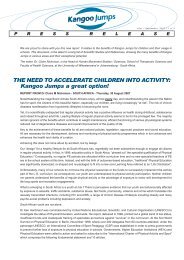 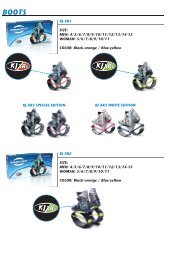 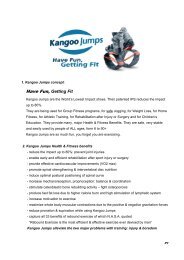 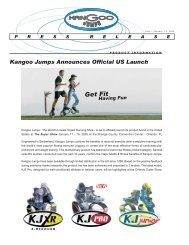 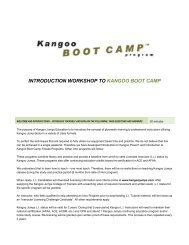 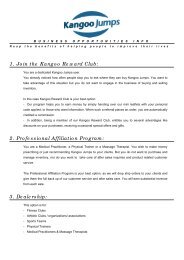 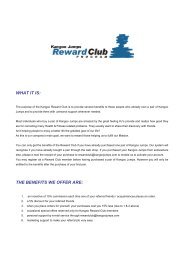 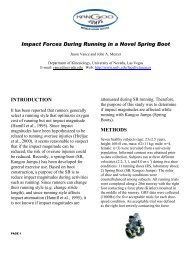 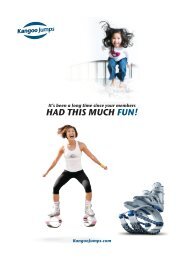 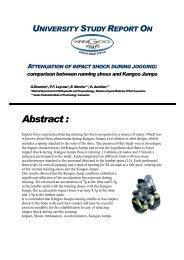 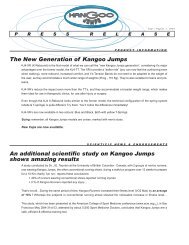