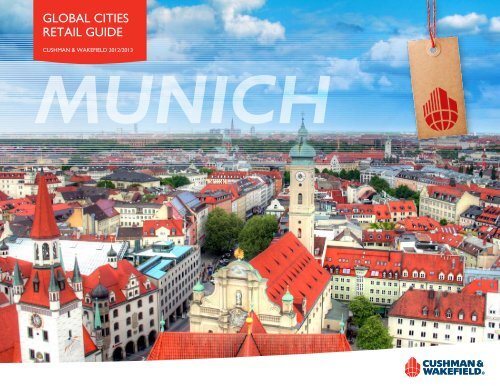 munich is one of the retail hot spots in Germany,

which is unsurprising considering the affluent

clientele in munich and its surroundings. the

purchasing power of munich and regions such as

starnberger see are unmatched in Germany.

Photos / WolfgangM (this page) and John Morgan (cover) on Flickr

Accordingly, Munich is in the focus of national and international retailers alike. The city is often their first choice

when it comes to expanding into the German retail market. a good example for such an approach is us retailer

Forever 21 who will open its first German store in the Bavarian capital. The fashion retailer signed a 6,800m² lease in

munich’s high street retailing is very much focused on the city’s Cbd. in vicinity to world famous frauenkirche and

Viktualienmarkt shoppers can find everything: from mass consumption to luxury goods.

twelve shopping centres with a total shopping mall Gla of 333,000 sq.m are located within the city’s boundaries.

Fünf Höfe located in the CBD’s Theatinerstraße is the most luxury mall in Munich with some 16,600 sq.m. The

Given munich’s historic Cbd and the fact that most streets are for pedestrians only, the shopping atmosphere is very

relaxed and attractive. local shoppers enjoy and value the Cbds retail scene as much as visitors from abroad.

the number of litres of beer sold

at the world famous oktoberfest in

Kaufinger Straße is one of Germany’s most frequented prime retail locations. the focus in the pedestrian street is on youth

Weinstraße, connecting Marienplatz and Theatinerstraße. The street exhibits little fluctuation and demand from national and

luxury retailers has been very strong. With supply limited, prime rents are currently at £ 350 per m²/month – not including

With the refurbishment of the former downtown offices of Süddeutscher Verlag, Sendlinger Straßen has gained in

attractiveness. Abercrombie&Fitch has signed a 3,300m² lease in the new Hofstatt project.

next to the Cbd, munich only has a limited number of attractive highstreet retailing stretches. a good example is the retail

dominate the scene. the street life is laid back and upscale. the saying that “munich is located in northern italy” comes true in

Another developing retail area outside the CBD – although located very close to it - is the submarket around Gärtnerplatz.

Young designers favour this location. the overall atmosphere is creative, young and urban. many shops are run by owner

is on youth fashion and mass consumption

with major department stores and and

Kaufinger Straße. The majority of stores is

demand for and demand is high. ever more

store in this up-scale pitch.

sendlinger straße With the refurbishment of the former

Verlag, sendlinger straßen has gained in

None in the past 6

months due to lack

None in the past 6

months due to lack

Munich’s food and beverage landscape is well-known across the

globe for its famous beer gardens, its hofbräuhaus, its local breweries

Apart from this unique local restaurant scene, munich is home to

eleven restaurants which were awarded at least one michelin star. only

in berlin is the number of restaurants recommended by michelin higher

(13). among the most famous michelin star restaurants in munich are

tramin, tantris and Restaurant dallmayr. Whereas the latter is located

right in the heart of munich, tramin is located east of the isar river and

Just as in any other of Germany’s top cities, munich’s restaurant

scene is diverse: from grilled Emu to vegan dishes, from Bavarian

mediterranean flair in summer. Whereas these cafés are mostly owner

occupied, the number of chain operated cafés such as starbucks is

constantly rising. among the most popular ones are Coffee fellows, san

Next to the Germany’s wide operating restaurant chains block

house, maredo and Vapiano, munich records a rise in local concepts that

run various restaurants across the city. Popular ones are e.g. kaimug, gast

The number of International food and beverage operators is

limited in munich. however, among them are mcdonald’s and burger

famous and popular leisure area. the

park is highly frequented by locals and

is dominated by restaurants serving

marienplatz historical square in front of the city

hall. the square is located in the very

heart of munich. Various Cafés and

located in this vibrant neighbourhood.

Located in Munich’s affluent and

variety of restaurants and bars is

no warranty or representation, express or implied, is made to the accuracy or completeness of the information contained herein, and same is submitted subject to errors, omissions, change of price, rental or other

conditions, withdrawal without notice, and to any special listing conditions imposed by our principals.