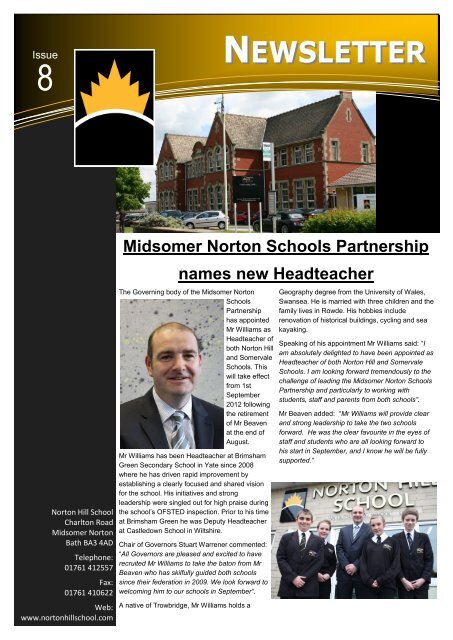 The Governing body of the Midsomer Norton

at the end of

Mr Williams has been Headteacher at Brimsham

Green Secondary School in Yate since 2008

where he has driven rapid improvement by

for the school. His initiatives and strong

leadership were singled out for high praise during

the school‟s OFSTED inspection. Prior to his time

at Brimsham Green he was Deputy Headteacher

at Castledown School in Wiltshire.

“All Governors are pleased and excited to have

recruited Mr Williams to take the baton from Mr

Beaven who has skilfully guided both schools

since their federation in 2009. We look forward to

welcoming him to our schools in September”.

A native of Trowbridge, Mr Williams holds a

Geography degree from the University of Wales,

Swansea. He is married with three children and the

family lives in Rowde. His hobbies include

Speaking of his appointment Mr Williams said: “I

am absolutely delighted to have been appointed as

Headteacher of both Norton Hill and Somervale

Schools. I am looking forward tremendously to the

Partnership and particularly to working with

students, staff and parents from both schools”.

and strong leadership to take the two schools

forward. He was the clear favourite in the eyes of

staff and students who are all looking forward to

his start in September, and I know he will be fully

'O' Champs as a Orienteering competitor

in York. He won the Sprint O Champs on

the Saturday which involved competition

heats and the final (set in the grounds of

York University campus). But, if this

Zac is currently preparing for the

over Easter and the British Long

(Classic) Championships in early May

(Lake District) and then the Welsh '6

We wish him every luck & success!

Year 10 students are volunteering their time and gardening skills

in order to create a community garden which is situated in

(10Q2) who was a Deputy Member of Youth Parliament was given

Colston (Green Vision), he then set up a steering group of 15 students

to draw up plans. On Wednesday the group attended a session on

permaculture run by Sarah Pugh (Shift Bristol) who helped them to

turn their plans into reality. This session was a great

success and the group have now marked out their

vegetable patches and flower beds. After Easter, the

project will be opened up across the rest of the

school as they move onto the planting stage. The

flower seeds, bulbs and trees. They are also

planning to install a bird bath. The group is really

keen to make their garden an area that can be

enjoyed by the whole local community. They are

very excited and can‟t wait to share their progress

Four students from Norton Hill have

shown off their language skills and won

themselves places in the final of a

After getting through the public vote, partly due to the support

of many of Cassidy‟s friends and teachers, Cassidy qualified

for the final of Miss Teen Dreams UK in Milton Keynes. At the

ceremony, she had to give a 5-10 minute speech in front of

the other forty contestants and three judges. Cassidy‟s

presentation was based upon the aims for the Dangme East

District in Ghana with her main focus being education.

Instead of focusing directly on the construction of schools in

the region, Cassidy concentrated her presentation on „The

limitation of learning resources in Ghana and how the use of

than any other media‟.

students have been taking part

in the national Languages

Spelling Bee, where they have

had to learn the spellings of 150

words in French, German or

Spanish, and then spell out loud

as many as they can within a

competitions back in the

autumn, resulting in them

gaining places to represent the

school in the regional final. This

March and saw teams from all over the

and easy to send over items

such as number lines and

posters to Ghana. I‟m sure

me achieve this, as in the

Summer, I will be collecting

as many resources as I can,

to fit into my suitcase to take

over to Ghana.‟ Cassidy also

help her achieve this aim.

„All in all, I hope to actually

inspire the children in Ghana to learn. I would love to be able

to brighten up their lives, even just a bit and make the school

environment a really cheerful environment, just like ours! Not

only due to the donated resources, but also by contributing

with a positive, enthusiastic, fun attitude (as usual)!'

The Norton Hill team held their own and

all four students won themselves places

at the national final in Cambridge in July.

For this, they will have to learn the

200 in total. Andrew Mateer, winner of

in the regional final made me feel

nervous and excited at the same time –

the trip to Cambridge is sure to be a

The competition is organised by „Routes

into Languages‟, a national consortium

working together with schools and

colleges to enthuse and encourage

students to continue with their language

Further details of this event can be found at

rendition of Hansel and Gretel,

the Pantomime. Among the

five performances over 4 days and demonstrated

just what can be achieved through sheer

determination, practice and oodles of enthusiasm.

It is great to see that level of commitment from our

The Year 11 Language Leaders have recently celebrated graduating from the scheme and gaining the award. For the last

year they have been busy working in after school sessions to

importantly, though, they have spent a lot of time supporting

younger students with their language learning. This culminated

in the Language Leaders hosting the regional final of the

year the cohort has been bigger than ever, at 36 students,

building on the successes of previous years. We congratulate

students from Veluws College in Holland

around and looked after

them for the day. They

taken to the hall where

they were paired up with

our Year 9s who they had

all students got to know

their partners and things about each

After this brief meeting, the English

students took their partners to their next

lesson where the Dutch students got a

feel for English lessons. The Dutch

pupils stayed with their partners through

5. In Period 6 everyone went back to

the hall and we then walked around the

school and did a quiz. Kindly, the Dutch

students brought us all presents from

Holland! They were typically Dutch

things including waffles and clogs!

After school, we all trekked to the astro

in the pouring rain for a game of football

between England and Holland. We drew

2-2 but would have lost if it wasn‟t for

The day was very

interesting and we learnt

a lot about Dutch culture

and schools. We would

and the Dutch visitors.

We hope to keep in

By Melissa Oram (9C1) and Jacob

vouchers into school ASAP. We are fast approaching the deadline for collection and we are on track to obtain some

fantastic new PE equipment for the start of next year. Remember every voucher counts!

Vouchers can either be posted into the box at reception or brought to the PE office.

School was the venue for a fantastic

musical concert in aid of Cancer

Research UK. Staff and students of all

ages gave performances across the

many genres of the musical spectrum

including classical, jazz and rock.

During the intermission, students held a

cake sale and raffle, both of which were very well received and helped add to the

total money raised, which on the night

The concert was very well attended by

parents and the music lovers amongst

thank the local community for their

support on what by all accounts was a

very successful evening in aid of a very

There will be a small charge for the

service where pupils can have their

nails painted. Pupils will be permitted

to wear polish for only that afternoon

and will be expected to arrive in

school on Monday, adhering to normal

Form embraced their charity week with great energy and enthusiasm.

For several weeks prior to the week, the Sixth Form student Council met weekly, planning the events carefully, to gain

maximum proceeds for their chosen charities.

The Sixth Form gave great consideration to deciding on which charities to support. They finally decided on Cancer Research

UK, Help for Heroes and local charity; Time is Precious. They all agreed they knew someone who had been affected by

cancer or war casualties, and they believe that Ben Halford has touched the hearts of everyone in our community.

The Council decided to offer a range of activities that they hoped would appeal to all year groups across both schools. The

week was a huge success with staff and students supporting each event, from yummy cake sales, a raffle, a school quiz

(with Sixth Formers beating the staff), Super Heroes fancy dress with lots of „pink clothing‟ during dressing up day,

culminating in the finale of a football match between the Sixth Form and staff which ended in a draw. A great time was had

The sixth form students agreed that they had thoroughly enjoyed participating in the charity week, were thrilled by the

support and were delighted to hand over cheques to the chosen charities and hoped it would put a smile on many faces.

On May 16 th the new Sixth Form Centre was opened at Somervale School . Costing over a quarter of a million pounds the

a base for the

The teachers were looking good

and the sixth formers didn‟t know

what hit them. Suddenly James

Gwyther goes down the wing and

finishes a beauty! The teacher‟s

heads went down but we knew

they wouldn‟t give up. Mr White

got the ball from Pricey, Mr White

Mr Price makes his way into the

box, he goes down and Goldsmith

towards us!) Mr Lee steps up,

straight down the middle and Jon Harvey saves it with his

Ireland was there to pick up the pieces! Ryan Gay heads

down the line running with extreme pace! He skips past

Ireland, but the finish wasn‟t great and turned out to be an

easy stop for the goal keeper. The teachers were looking

up on the edge

of the box from

this time not a

take it, but he scuffs it and hits the wall. As the game goes

on, the teachers are getting free kicks everywhere from Mr

White. Mr Ireland steps up to this one! Goes for finesse and

hits the crossbar! So close to equalising! Another free kick

has been awarded to the teachers. The unknown

science teacher gets a chance to finish it, he hits

it hard and it flies over the goalkeepers head into

the back of the net. Mr Goldsmith blows his

whistle and ends it at that!!

Dates for 2012/13 Academic Year are now available on the school’s website.