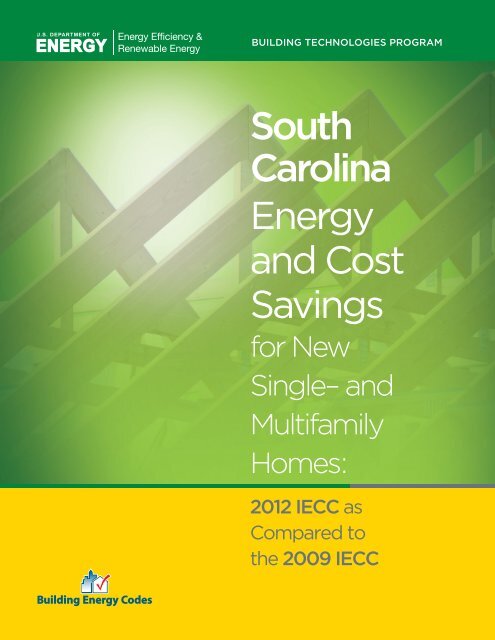 Savings for New Single– and

over a 30-year life cycle. On average, South Carolina homeowners

Each year, the reduction to energy bills will significantly exceed

increased mortgage costs. After accounting for up-front costs and

additional costs financed in the mortgage, homeowners should

cumulative cash outlays) in 2 years for the 2012 IECC. Average

Cost-effectiveness against a 2009 IECC baseline:

• Households save an average of $315 per year on

energy costs with the 2012 IECC

savings, mortgage cost increases, and other

associated costs in the first year of ownership,

The U.S. Department of Energy (DOE) evaluates the energy

codes based on three measures of cost-effectiveness:

savings, the initial investment financed through

costs of a new code

Life-cycle cost is the primary measure by which DOE

assesses the cost-effectiveness of the IECC. These savings

assume that initial costs are mortgaged, that homeowners

take advantage of the mortgage interest deductions, and

after the 30-year analysis period. As shown in Table 1, lifecycle

Table 1. Average Life-Cycle Cost Savings from Compliance with the 2012 IECC, Relative to the 2009 IECC

energy-efficient homes. Based on this analysis, South

energy cost savings of $315 per year and achieve a

net cumulative savings that accounts for an increased

down payment in addition to energy costs, mortgage

costs, and tax-related costs and benefits in 2 years when

Table 2. Impacts to Consumers’ Cash Flow from Compliance with the 2012 IECC Compared to the 2009 IECC

Down payment and other up-front

Years to positive savings, including

The U.S. Department of Energy (DOE) provides estimates of energy and cost savings from code adoption:

For more information on how these estimates were developed, visit the DOE Building Energy

For information on Building Energy

An overview of the methodology used to calculate these impacts is provided below. Further information as to

how these estimates were developed is available at the U.S. Department of Energy (DOE) Building Energy Codes

International Energy Conservation Code (IECC) and the 2009 IECC. These are:

of a new code

period. LCC is a well-known approach to assessing cost-effectiveness. DOE uses LCC for determining the costeffectiveness

of code change proposals, and for the code as a whole, because it is the most straightforward

approach to achieving the desired balance of short- and long-term perspectives.

The financial and economic parameters used for these calculations are as follows:

o Loan fees equal to 0.7% of the mortgage amount

• Other rates and economic parameters:

o Windows, duct sealing, and envelope sealing have a 30-year life and hence no residual value at

the end of the analysis period

This analysis determined the energy savings and economic impacts of the 2012 IECC compared to the 2009 IECC.

the basement, and windows that cover 15% of the wall area, equally distributed on all sides of the house

2. Multifamily: A three-story building with 18 units (6 units per floor), each unit having conditioned floor

area of 1,200 ft 2 and window area equal to approximately 10% of the conditioned floor area, equally

distributed on all sides of the building

Each of these building types, single-family and apartment/condo in a multifamily building, has four unique

PNNL incorporated the prescriptive requirements of the 2006, 2009, and 2012 IECC when modeling the impacts

of changes to the code. Whenever possible, PNNL uses DOE’s EnergyPlus model software to simulate changes

to code requirements. However, in some cases, alternative methods are employed to estimate the effects of a

given change. As an example, in order to give full consideration of the impacts of the 2012 IECC requirement for

pipe insulation requirements in the 2012 IECC, which results in a 10% savings in water heating energy use (Klein

Energy and economic impacts were determined separately for each unique scenario, including the single-family

However, the cost-effectiveness results are reported as a single overall state average. To determine this

average, first the results were combined across foundation types and heating system types for single-family and

multifamily prototypes as shown in Table A.1 and Table A.2 (single-family and multifamily have the same shares

for foundation types). For example, the primary heating system type in new residential units in South Carolina is

account for the predominance of heat pump heating. Then single-family and multifamily results were combined

to determine a state average weighted by housing starts from 2010 U.S. Census data as shown in Table A.3.

Table A.3. Construction by Building Type

All versions of the IECC have requirements that apply uniformly to all climate zones, and other requirements

that vary by climate zone. Highlights of the mandatory requirements across all buildings include:

• Building envelope must be caulked and sealed. The 2012 IECC adds a requirement that the building

must be tested and a level of leakage that is no more than a maximum limit must be achieved.

• Ducts and air handlers must be sealed. Testing against specified maximum leakage rates is required in

the 2009 and 2012 IECC if any ducts pass outside the conditioned space (e.g., in attics, unheated

• Supply and return ducts in attics, and all ducts in crawlspaces, unheated basements, garages, or

otherwise outside the building envelope must be insulated.

• For both the 2009 and 2012 IECC, a minimum percentage of the lighting bulbs or fixtures in the dwelling

must be high-efficacy lighting.

A comparison of significant IECC requirements that do not vary by climate zone is contained in Table A.4. Of

these, the most significant changes in the 2012 IECC compared to the 2009 IECC are the requirements for

pressure testing of the building envelope and ducts/air handlers, and for insulating service hot water pipes. The

requirement for high-efficacy lamps, while significant, is somewhat abated by a superseding federal regulation

Table A.4. Comparison of Major Requirements That Do Not Vary by Climate Zone

by visual inspection against a

tested, or all ducts must be

Caulked and sealed, verified by visual

inspection and a pressure test against a

Sealed, verified by visual inspection, and

pressure tested against a leakage requirement,

or all ducts must be inside building envelope

Return ducts in attics and all ducts in

or otherwise outside the building envelope

High-efficacy lamps (percent of lighting in

Certificate of insulation levels and other

R-3 except where pipe run length is below a

Requirements such as insulation levels and fenestration (window, door, and skylights) U-factors can vary by the

eight zones in the United States. Table A.5 shows these requirements. South Carolina has one climate zone

Table A.5. Comparison of Major Requirements That Vary by Climate Zone

* The second number applies when more than half the insulation is on the interior side of the high mass material in the wall.

is a furred-out wall built against the foundation wall). Only one of these two has to be met.

*** The first number is R-value. The second value refers to the vertical depth of the insulation around the perimeter.

**** Basement wall insulation is not required in the warm-humid region of Zone 3 in the southeastern United States.

While exemptions or allowances in the code are not included in this analysis, the code does allow for some of

these depending on the compliance path. Examples include the following:

• Five hundred square feet or 20% of ceiling area of a cathedral ceiling, whichever is less, is allowed to

Table A.6 shows the costs of implementing the prescriptive measures of the new code. Costs are provided for

both the reference home and apartment/condo, and for the cost of moving from the 2009 to the 2012 IECC.

The costs derive from estimates assembled by Faithful + Gould (2012) and a number of other sources. 2 The

original cost data were based on a national average. The costs are adjusted downwards by 19.2% (multiplied by

0.808) to reflect local construction costs based on location factors provided by Faithful + Gould (2011).

Table A.6. Total Construction Cost Increase for the 2012 IECC Compared to the 2009 IECC

Table A.7 shows the LCC savings (discounted present value) of the new code over the 30-year analysis period.

These savings assume that initial costs are mortgaged, that homeowners take advantage of the mortgage

interest tax deductions, and that efficiency measures retain a residual value at the end of the 30 years. As

Table A.7. Life-Cycle Cost Savings Compared to the 2009 IECC

Because most houses are financed, consumers will be very interested in the financial impacts of buying a home

that complies with the 2012 IECC requirements compared to the 2009 IECC. Mortgages spread the payment for

the cost of a house over a long period of time (the simple payback fails to account for the impacts of mortgages).

In this analysis, a 30-year fixed-rate mortgage was assumed. It was also assumed that homebuyers will deduct

the interest portion of the payments from their income taxes.

Table A.8 shows the impacts to consumers’ cash flow resulting from the improvements in the 2012 IECC. Upfront

costs include the down payment and loan fees. The annual values shown in the table are for the first year.

savings are expected to increase over time because of escalating energy prices. These tables also include

costs. The time to positive cash flow includes all costs and benefits, including the down payment and other upfront

As shown in Table A.8, on average, there is a net positive cash flow to the consumer of $202 per year beginning

in year one for the 2012 IECC. Positive cumulative savings, including payment of up-front costs, are achieved in

Table A.8. Impacts to Consumers’ Cash Flow from Compliance with the 2012 IECC Compared to the 2009 IECC

A Down payment and other up-front costs $211

insurance, and property taxes (year one)

or completely offset insurance and tax costs. As such, the "net" result appears relatively small or is sometimes even negative.

Table A.9 shows the simple payback period, which consists of the construction cost increase divided by first-year

the initial investment. Simple payback does not consider financing of the initial costs through a mortgage or

Table A.9. Simple Payback Period, Relative to the 2009 IECC (Years)

Oil prices are $23.7/MBtu. Energy prices are assumed to escalate at the rates published in DOE’s Annual Energy

Table A.10 shows the estimated annual energy costs, including heating, cooling, water heating, and lighting per

home that result from meeting the requirements in the 2009 and 2012 IECC. Table A.11 shows the total energy

cost savings as both a net dollar savings and as a percentage of the total energy use. 3 Results are averaged

Table A.10. Annual Energy Costs for Different Versions of IECC

Table A.11. Total Energy Cost Savings Compared to the 2009 IECC

3 The percent savings is the annual energy cost savings for heating, cooling, water heating, and lighting divided by the total