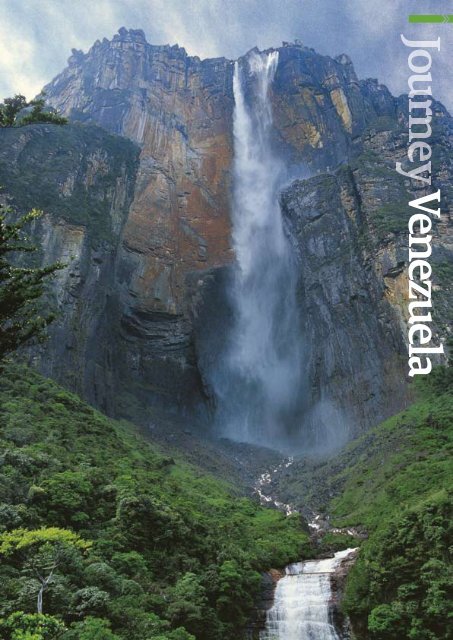 Venezuela at a glance

Venezuela is a Latin country with a Caribbean

beat, and an important surviving indigenous

the indian communities of the Orinoco and

Special attractions include the ‘Lost World’ of flattopped

table-lands where waterfalls plunge over

grassland of the llanos, with its teeming wildlife,

and some lovely Caribbean beaches.

Venezuela has a comprehensive road network,

or you can reach places of interest using frequent

short domestic flights. In addition to its

impressive and growing range of accommodation

there are now many opportunities to undertake

adventure activities such as horse-riding,

Lying between the virgin jungle of the Orinoco

grasslands, cattle-raising territory which is a haven

for wildlife. There are a series of comfortable

lodges, or hatos, where you can base yourself for

This is the most northerly outcrop of the Andean

range, with many snowy peaks. There is a variety

of scenery from rainforest on the lower slopes up

to the highland moors (páramo). Situated on a

river terrace, Mérida is a pleasant town and good

base for visits to the area.

Climate: Over half the country enjoys a

are hot and humid. The northwest is

harbours a number of beautiful

palm-fringed beaches. On the

Los Roques there are facilities

4. The tablelands of the Gran Sabana

Angel Falls is one of the most

spectacular sights in the world – viewed

from the air or from a boat at the foot.

At 979m it constitutes the world’s

the lip of one of the series of tabletopped

mountains that dominate the

grasslands of the Venezuelan veldt

The vast network of waterways which form the Orinoco

delta is home to the Warao indians, who live a simple life

along the riverbanks. Visit this remote area from Tucupita

or one of a number of more remote lodges.

Tuesdays or Fridays from the UK

Day 1 Morning flight from the UK to the capital Caracas. Day 2 Fly to

Canaima National Park for a 2 night stay. Day 3 The climax of a visit to

in the Orinoco Delta (p63), mantled in jungle and mangrove swamps.

Mérida, an Andean university town and a centre for outdoor activities.

and para-gliding are all available locally. Day 10 Drive to Hotel

accommodation in the area of high páramo plains, visiting several

to the llanos – the floodplains of the Orinoco, grasslands rich in bird

and animal life. Accommodation is on a working cattle ranch.

Days 12&13 Complimentary excursions by jeep or boat through the

llanos. Day 14 Drive to Barinas airport and fly to Caracas. Day 15 Fly to

the UK arriving the following day.

Gran Sabana and the Orinoco

South of the River Orinoco, half of the territory of

simply on the banks of the spider’s web of dark, sluggish

waterways; the blanket of grassland prairies (llanos), with

and, most evocative of all, the ancient sheer-walled

tepuys of the Gran Sabana, known as the ‘Lost World’ with

a nod to Arthur Conan Doyle’s adventure story. Here, the

Angel over 70 years ago are the centre of attraction. Even

some of the towns have a frontier feel: prospectors gather

– the search for mythical El Dorado in colonial times was

*Please note: The order of the itinerary is subject to domestic flight schedules.

Prices from £2,091pp based on two sharing, excluding transatlantic flights.

Below: Hotel Los Frailes, near Mérida in the western Andes.

Above: Excursions by canoe on the lagoon at Canaima to the foot of the Yuri falls (shown here)

are included as part of the Canaima extension.

The base for visiting the Angel Falls is

in the National Park at Canaima.

Here, a huddle of chalets faces a

lagoon; but the Falls, which cascade

from the top of Auyan Tepuy, are not

visible from the encampment.

Upon arrival at Canaima by air,

overnight in a simple lodge and then

canoe to the foot of the Angel Falls

where crystal water and veils of

agitated spray plunge over a precipice

with an unimpeded drop of almost a

kilometre. It is an hour’s tough walk

through rainforest to the point on

a rocky ledge where there is a

magnifi cent view of the falls.

After a night spent in hammocks,

return to Canaima. There is the

over the cataract. Overnight in a

simple hotel and return to Canaima

The rivers are at their highest, and the

falls at their most spectacular, in July

and August. At other times it may

be necessary to disembark to allow

canoes to be portaged over rapids.

Upon arrival at Canaima by air,

overnight in a simple lodge

overlooking the lagoon. The lightaircraft

fl ight over the Angel Falls

offers stupendous views: a veil of

misty spray in the dry seasons,

while three separate cataracts are

visible in the wet.

Flights are subject to demand and

weather conditions and will not

operate in poor visibility. Other

extra excursions can be arranged

locally, including a trip to Yuri Falls,

or upstream to Isla Orquídia with

From £366pp based on two sharing

From £453pp based on two sharing

The hike up Roraima is

considered one of the most

compelling on the continent.

You have to be fit, and there

are plenty of bugs, but the

rewards at the top make the

Following a night in the Venezuela-

drive by jeep northwards into the

savannah, over dirt roads to reach

from which you set out for the base

camp. Start the trek the next day:

it is a 5-hour hike across rolling

ropes if necessary. The savannah

rises steadily towards the base of

Roraima. After a night under canvas,

climb a diagonal trail through the

rainforest, picking your way through

sheltering from waterfalls above, to

reach the top (5 hours). Explore the

surface of the plateau, an otherworldly

Descend to the campsite at the Río

Tek. On arrival in Paraitepuy, return

by jeep to Santa Elena. Depart from

Below: Several places in Latin America

claim to be the inspiration for Conan Doyle’s

The banks of the Orinoco and its

the Warao indians or ‘canoe people’

and the only means of transport is by

river. The Orinoco Delta Lodge is

by a combination of ferry, car and

is in simple cabins with bathroom.

The English-speaking guides offer a

and a visit to various local indian

settlements. The delta has a diverse

biosphere with an abundance of flora

and fauna, particularly bird-life. There

is the option of spending one of the

following nights in a more remote and

Rooms are large and open – no

and basic – with beds, one small

table and electricity from 6am

until 11pm – but overall you will

have the full experience of being

in the midst of the jungle without

Above: They say that caimans don’t attack

humans. But you wouldn’t want to get too

Right: Hoatzin. This unusual bird, with a

call somewhere between a peacock and a

clapped out gearbox, is considered to be

the closest thing to living proof that birds

From £427pp based on two sharing

This working ranch is a de facto nature

reserve, the owners having prohibited

hunting. The land lies in the north

the land is flooded. The open

savannahs are used for cattle pasture.

The ranch has many different types of

and others, such as capybaras,

caimans and howler monkeys, which

species of birds have been identified.

The only planned activities are

observation of the flora and fauna,

by boat, horse-back, truck or on foot.

The ranch-house itself is charming,

and beams made from local wood

and a wide verandah.

Simple but good. Food is fresh

especially will be entranced.

Winding down on the Caribbean coast

This was Columbus’s ecstatic assessment of Venezuela’s

Caribbean coast when he first set foot here, and it

certainly does have some exquisite scenery. West of the

capital there are pretty colonial towns and sparkling

of Coro, founded in 1527, retains much of its colonial and

doorways and terracotta frescoes. East of Caracas, the

outstandingly beautiful Paria peninsula is one of those

unsung and almost unvisited areas of the coast which

evokes an era before tourism reached the Caribbean.

Los Roques consists of 42 sun-bleached cayes and over

From £398pp based on two sharing

The islands can be reached by air

from Caracas. The electric blue

lagoons and beaches of pristine,

for winding down. Surrounding the

islands are 20km of coral reef with

courses are available. There are a

number of small and charming barefoot

for you to choose from, each with a

homely and relaxed style, where

you can hang out in a hammock or

establishment is located on a coconut

in a row of white-washed, one-storey

rooms with hammocks on individual

terraces. There is a small pool, tennis

by, and on the tiny isthmus to the

north of the town and beyond, a

This is a good base from which to

explore the area – you can visit

nearby coffee plantations and

Coro, as well as the quiet beach

Top: The beaches in the far east of

Venezuela have the advantage that they

are not easily accessible by road from

the metropolitan areas of Caracas. This

is Playa Medina on the Paria Peninsula.

Above: Distance from Caracas has

new development at the same rate as

other parts of Venezuela.

The Hacienda Bukaré is a small

family-run farmhouse on a cocoa

plantation. There are just 4

whitewashed rooms in a one-storey

building with a wide verandah. The

rooms overlook a neat garden and a

trees. The hacienda is also engaged

It is located 15 minutes’ drive away

The Bukaré has that warm,

from home. The unspoilt beaches

a stay more of an ‘experience’

than a conventional beach

Above: Fresh from the cacao pod to your

plate; home-made chocolate is a delicious

Above: Los Roques. There’s almost no natural shade, so 4 days here is strictly for sun-worshippers and snorkellers. 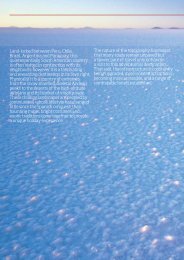 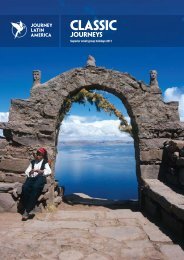 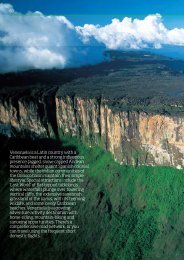 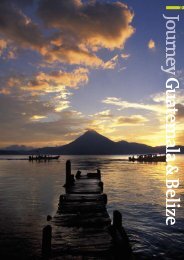 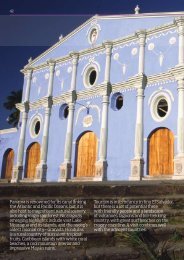 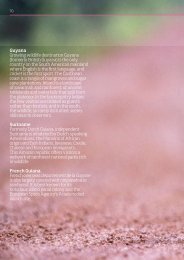 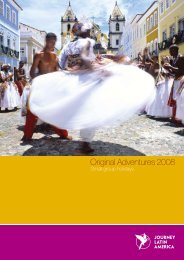 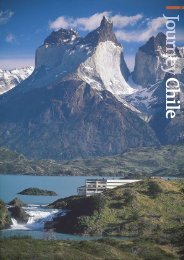 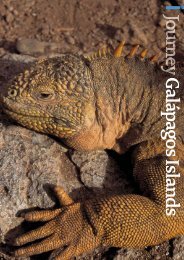 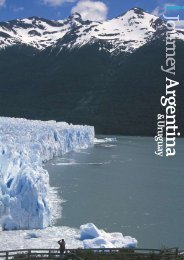 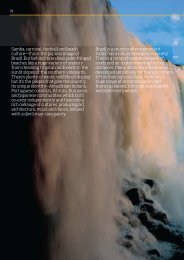 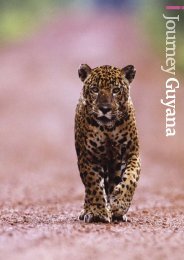 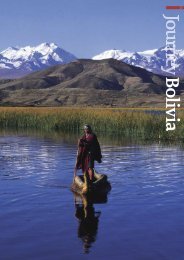