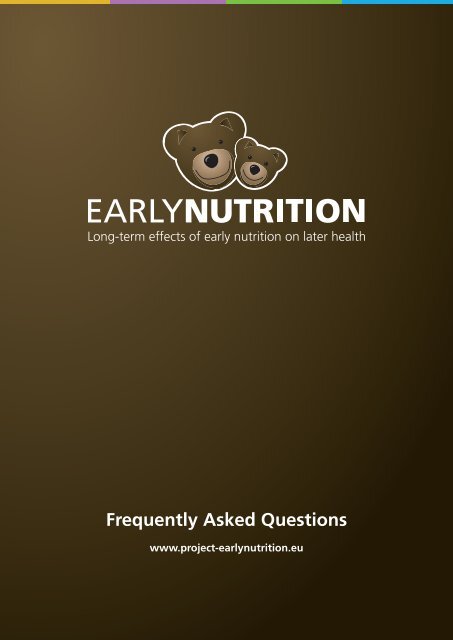 What are the key facts about EarlyNutrition

for obesity and health later in life.

The EarlyNutrition project started on

60 months and is anticipated to end

from academia, industry and Small and

USA and Australia is coordinated by

Prof. Berthold Koletzko and team from

in funding by the EU towards a total

will implement an ambitious research

research programme is divided into four

studies of determinants in contemporary

of evidence based recommendations

for nutrition, for the four phases: prepregnancy,

These themes are strengthened

by multidisciplinary collaboration from

experts in their respective fields.in their

Why are collaborative research projects

funded by the EU

are beyond the scope of

financial support by the EU

under the cooperation scheme.

All research-related EU initiatives are administered

under a common roof called

consolidate leadership in key scientific and

Projects are open to organisations and

partner states, and other eligible countries.

Specific areas and topics are supported

in rounds of publicly advertised

calls for proposals, which touch on many

aspects of daily life such as food safety and

EarlyNutrition is working to achieve the

aims of the FP7 concept in its project. It

has defined a systematic approach which

builds on the expertise of researchers from

and Australia. This is extremely valuable as

has been conducted in a rather scattered

manner throughout the world for years

while at the same time obesity and its related

diseases have increasingly become a

How many research institutions participate

countries, Australia, and the United

from their respective institutes in the

The current project is based on a

effects and successfully determined a

How will progress and success within the project

The consortium is bound by

a contract with the European

the researchers have to fulfil in order

to provide evidence about their

progress towards identified goals and

qualify for the stipulated funding.

In addition to official reporting, the consortium

will continuously present the

in peer reviewed journals and online on

the partners will meet twice a year in

person for scientific exchange and discussions

of future steps. The EarlyNutrition

project will therefore make its

to researchers as well as national

stakeholders and also engages in public

EarlyNutrition partners have signed a

contract with the EC identifying research

tasks, which are associated with 182 deliverables.

details about the results obtained

within a given task. At specific intervals,

the whole consortium will submit a report

to the EC that will include scientific

results as well as financial and administrative

details. These reports need to be

approved by the EC before further funding

is paid out to the researchers. Successful

progression of the project will be

measured by the timely achievement of

its deliverables, as well as the dissemination

of these results to the appropriate

The overall progress of the research will

be closely monitored internally, but also

by a scientific advisory board and by independent

experts assigned by the EC.

How much will EarlyNutrition cost

The total project budget is of the official reports. Most of the financial

allocation will be attributable

more than €8.96 million will be borne to personnel costs, and therefore the

by the EC pending that the consortium

project will create job opportunities for

The effective funding by the EC is dependent

on the occurred actual costs tors at respected research institutions

as well as for identifying new investiga-

of the partners and the positive review throughout Europe.

as a whole. For example, one Euro

leads to an increase in industry added

What are the aims of EarlyNutrition

EarlyNutrition aims to expand and mechanistic insight into how metabolic

the scientific understanding of

metabolic programming effects and outcomes later in life are still limited. In

their contribution to obesity and related order to bridge this gap, the EarlyNutrition

project has developed an ambi-

that the early nutritional and life-

the mechanisms of metabolic programtious

style experiences of a child can dispose ming. Thereby it aims to provide insight

children towards obesity later in life. into the causes and solutions of obesity

However, evidence based associations and related disorders as well as giving

people an idea on how to best intervene

with the adverse programming effects in

By extending project data to relevant

stakeholders including the food industry,

among others, EarlyNutrition is committed

to ensure that the latest scientific

data are incorporated into relevant recommendations

“Early nutrition” refers to the While still in the womb, babies are surrounded

metabolic status of the un-

by the placenta, a specialized

born child and in the first two years

What does the term “early nutrition” refer to

on their mothers for their nutrition.

from the maternal blood stream

During pregnancy and the first few to the unborn child. Therefore, the nutrition

reaching the foetus is dependent

on the maternal nutrition, weight, and

overall health status. This reliance on the

mother continues after birth when the

including infant formula, will define the

nutritional experience of a toddler.

“Early nutrition” therefore refers to this

stage of life, when a child´s nutritional

experience is largely defined by the

Why is obesity called a modern epidemic

be the key to understanding the

people in Europe has

The technical term “epidemic” refers to

the spreading of a disease at unusually

high rates. Based on the latest estimates

in countries of the EU, overweight affects

up to 70% of the adult population while

sharp increase is the result of numerous

factors including: a general shift in people’s

containing foods, as well as a decrease in

daily physical activity due to the progressively

sedentary nature of many forms of

and growing urbanisation. These conveniences

of the modern world are therefore

influencing the increase in obesity and

be the key to understanding the

Trans-Generational Metabolic Programming: In order to contribute to the explaination of the obesity epidemic researchers have postulated a trans-generational effect, i.e. a

mechanism where health status of a parent can dispose their children towards overweight. Observational studies have confirmed that an unfavourable metabolic experience of an

unborn can indeed dispose towards overweight in later life. Once established in the population, the risk of obesity may propagate from one generation to the next.

This is illustrated in the above figure, where obesity (yellow individuals) is spreading in a population with stable disposing factors towards overweight and obesity (blue icons). If in

addition obese mothers predispose their children towards obesity (pink icons), this effect is sufficient to increase the number of obese individuals from one generation to the next.

Overweight individuals in WHO regions

(in % of the entire population)

Obesity is a medical term used

to refer to excessive body fat.

The definition of obesity is based on an

is also sometimes referred to as adiposity.

A first estimate about the weight status

of an individual is provided by the body

and 25 is considered normal. 3 The BMI

is calculated by using a person’s weight

(kg) divided by their height in metres

are considered overweight, while a value

over 30 may constitute obesity.

What are the consequences of more people

The growing prevalence of

is propagating an upsurge in

many diseases leading to increased

health care costs and a decrease in the

quality of life of a significant proportion

The diseases associated with obesity include

the risk of other non-communicable diseases,

million adults die each year as a result

of being overweight or obese. In addition,

almost half of the diabetes burden,

a quarter of the ischaemic heart disease

certain cancers are attributable to being

the WHO, overweight and obesity are

among the five leading causes of death

both in industrial and developing countries.

Obesity has a major impact on society

and health care systems in addition to

the devastating effects on individuals.

In 2010, the health care costs attributable

to obesity were estimated to be

between one and three per cent of the

countries; In the United States,

absenteeism due to high BMI was calculated

to amount to a loss of up to three

What are the consequences of more children becoming

an increased risk of the aforementioned

diseases but also have, on

average, a poorer quality of life.

Of particular societal concern is the increasing

number of overweight children. It is

estimated that over 60% of children who

than 40 million children under five were

million children were obese in 2004. 6 Estimates

of overweight infants and children

in the WHO European Region rose steadily

The diseases associated with obesity are

young adults with enormous personal and

at an early age coincides frequently

with a negative self-image, academic underachievement,

social isolation and a

quality of life at an early age. Moreover,

childhood obesity is a serious problem not

only because it predispositions them to numerous

childhood diseases but also to premature

EarlyNutrition will investigate factors and

mechanisms of early nutrition and lifestyle

programming during the four phases: prepregnancy,

in order to identify means to interfere with

What are the possible causes of obesity

The fundamental cause of Besides genetic predisposition and an unhealthy

obesity and overweight is an

consumed and calories expended. effects as a predisposing factor for obesity

Globally, there has been an increased intake

of energy-dense foods that are high overweight children. In addition to steps

and, in particular, the increasing number of

in fat, salt and sugars but low in vitamins, that can be taken by individuals, research

minerals and other micronutrients. 6 At the can contribute to tackling obesity on a societal

same time, there has also been a decrease

overweight and obesity: 1) the fuel

three main hypotheses on the causes of

‘in utero’ hypothesis, which asks the

to glucose and other fuels permanently affects

the risk of obesity in postnatal life;

during infancy increases the risks of becoming

obese; and 3) the “mismatch hypothesis”

which investigates if a sub-optimal

perinatal and an obesogenic childhood environment

predisposes children to obesity in

What does the term “metabolic programming”

to the concept that the

of an individual leads to determinative

programs in their health

status later in life. In the context of

the EarlyNutrition project, this term is

investigated for the influence it has

on predisposing individuals for overweight,

which are mediated by nutritional

status at different stages of development.

For example, studies show that obese

mothers and those who put on excessive

weight gain during pregnancy have a much

higher chance of their children becoming

overweight themselves than those mothers

who do not. In addition, infants during

the first six months of life appear to be also

The early nutrition pathways to programme

obesity are likely to be multifactorial, but

once established in the population, the risk

of obesity may be able to propagate from

one generation to the next.

Why should we tackle obesity at an early

Habits that are established

early in life are notoriously

For this reason, early intervention activities

are more likely to provide a successful and

parents and society are called upon to create

a supportive environment, which favours

8 WHO: The challenge of Obesity

This project receives funding from the 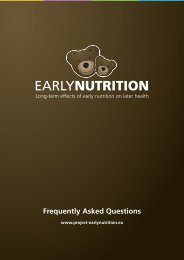 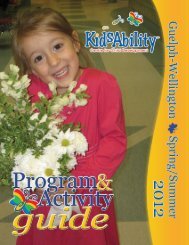 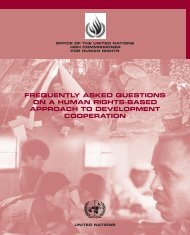 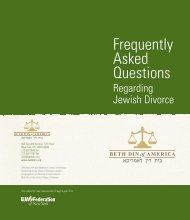 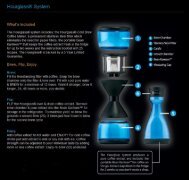 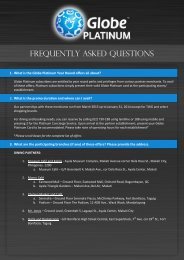 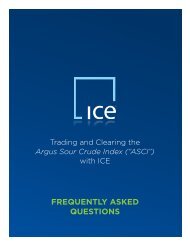 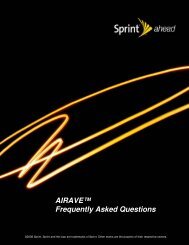 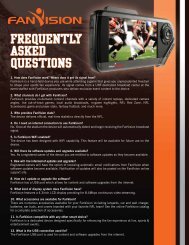 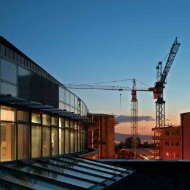 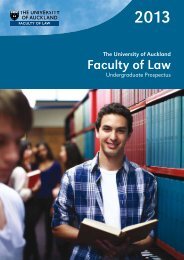 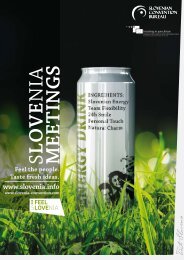 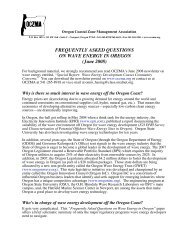 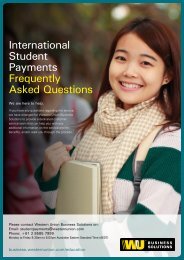 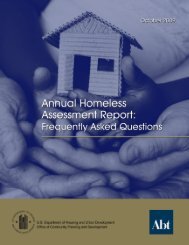 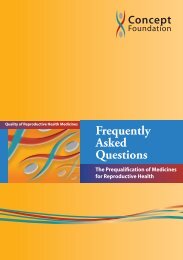 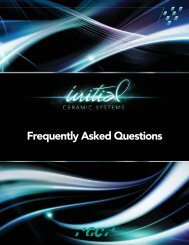 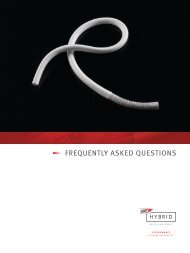 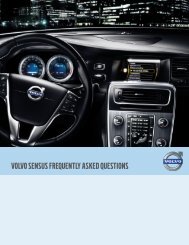 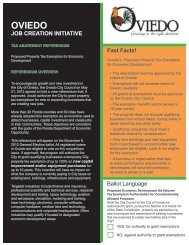 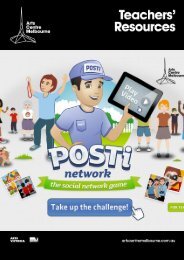 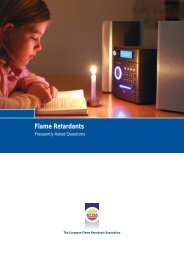