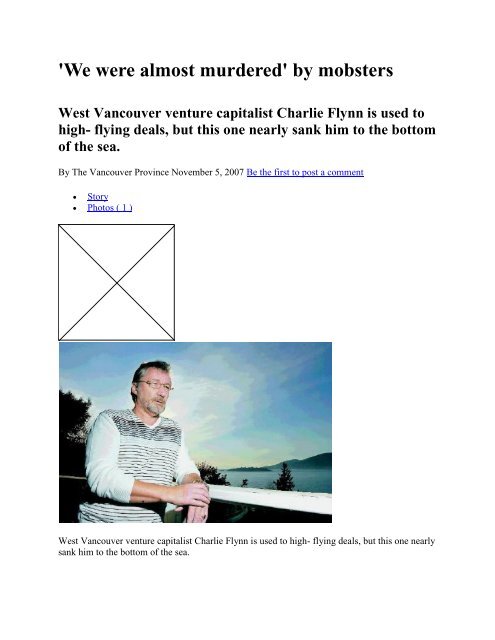 'We were almost murdered' by mobsters

high- flying deals, but this one nearly sank him to the bottom

West Vancouver venture capitalist Charlie Flynn is used to high- flying deals, but this one nearly

sank him to the bottom of the sea.

The globe-trotting Flynn, 55, says he had to fight for his life when Russian mobsters attacked

him earlier this year on a luxury sailboat docked in Thailand. And that was after he and his wife

narrowly missed being tortured in a Thai resort town.

Now, at his house on the West Vancouver waterfront, Flynn's wife, Lisa Cain, still jumps at

every sudden sound, and Flynn is watching closely as the FBI, CIA and U.S. State Department

"We were almost murdered," Flynn said yesterday. "These guys play for keeps. I call them

international men of mystery. They have three names, four different credit cards. They have

homes in Thailand and Moscow and Salt Lake City and Vegas." The dramatic events that swept

up Flynn are detailed in an FBI affidavit and a U.S. federal court indictment concerning Egor

Michailovich Chernov, a Russian immigrant living in Utah. In the affidavit, Flynn is described as

Flynn first met Chernov in 1999 in Las Vegas. The bear-like Russian, 32, was introduced as the

A vodka-soaked night in Vegas led to sporadic contact over the next few years, until Flynn flew

to Thailand in 2004 to meet again with Chernov to discuss buying a villa.

At the time, Chernov was with New York motivational speaker Rex Judd. Flynn says the pair

wanted him to invest in an artificial skin product developed in Russia.

"I agreed that I would do something," Flynn said. "It looked interesting." Then Chernov began to

pressure him to wire $250,000 to an account in Cyprus, while Judd confided that he'd invested

$3.5 million with Chernov and was trying to get some of it back, Flynn said.

There was a man Chernov called a hired killer whose appearance, Flynn said, was "scary, very

cold, cold as ice. He's got one eye that's straight, one that goes to the side." There was a second

purported hitman, a Russian, plus a massive thug with a shaved head.

As for Judd, he went missing and is presumed dead, killed -- Flynn believes -- because he

wanted his money back.

Flynn said Chernov and his associates began upping the stakes, asking him to transfer $30

million in stock holdings to a Florida man.

"They [were] going to give me a chance to get an oil lease in Russia," he said.

Last March, in Thailand, Flynn found himself in the back seat of a car between the shavenheaded

goon and another Russian. Chernov was at the wheel.

Flynn said the group ended up on the sailboat, Flynn protesting that he had to leave to meet his

wife for dinner. When he reached for his cellphone, he was shot in the back with a Taser, he said.

In the melee that followed, Flynn received a blow to the head but was able to leap on to the dock

to make his escape.

passports and identification. An FBI affidavit says the passport case is "inextricably intertwined"

with the alleged murder of Judd.

in Thailand in 2005 and heard Chernov tell two men to kill "CC-1," whom Flynn identified as

CC-7, who referred to Chernov as "the Russian maggot," said he helped get rid of evidence of

the murder, and he provided the FBI with a ring and cufflinks he said belonged to the victim.

When an FBI agent showed a photo of the ring to Judd's wife, she began to cry and said it was

Chernov had a falling-out with his associate, Paul Combs, Flynn said. Combs, who also went by

the names Aleksandar Stanislavov Karanikolov and Michael Woods, is now facing a charge for

Combs' federal-court indictment as "E.C." Since the falling-out, Flynn has heard from a Chernov

associate that Flynn and his wife, on an earlier trip to Thailand, narrowly missed ending up in a

"torture home" prepared for them. The plan was to hurt Lisa until Flynn signed over assets, then

"They had electric batteries there, and all sorts of torture devices, and they had black plastic

across all the windows," he said. "They had the chains all ready, and the buckets, to put us into

the bottom of the ocean."