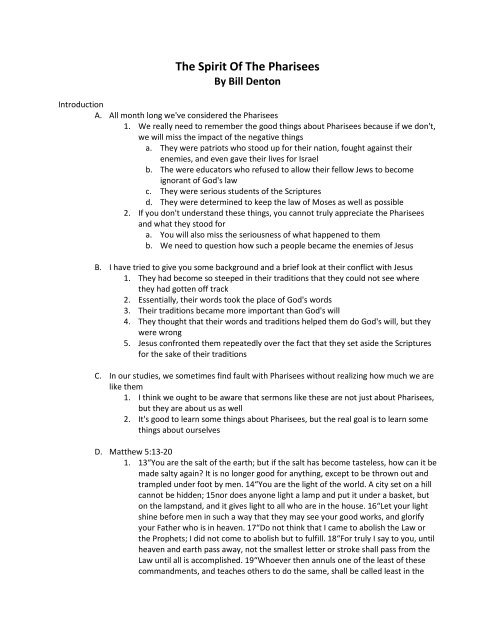 The Spirit Of The Pharisees 5

The Spirit Of The Pharisees 5

The Spirit Of The Pharisees

A. All month long we've considered the Pharisees

1. We really need to remember the good things about Pharisees because if we don't,

we will miss the impact of the negative things

a. They were patriots who stood up for their nation, fought against their

enemies, and even gave their lives for Israel

b. The were educators who refused to allow their fellow Jews to become

c. They were serious students of the Scriptures

d. They were determined to keep the law of Moses as well as possible

2. If you don't understand these things, you cannot truly appreciate the Pharisees

and what they stood for

a. You will also miss the seriousness of what happened to them

b. We need to question how such a people became the enemies of Jesus

B. I have tried to give you some background and a brief look at their conflict with Jesus

1. They had become so steeped in their traditions that they could not see where

they had gotten off track

2. Essentially, their words took the place of God's words

3. Their traditions became more important than God's will

4. They thought that their words and traditions helped them do God's will, but they

5. Jesus confronted them repeatedly over the fact that they set aside the Scriptures

for the sake of their traditions

C. In our studies, we sometimes find fault with Pharisees without realizing how much we are

1. I think we ought to be aware that sermons like these are not just about Pharisees,

but they are about us as well

1. 13“You are the salt of the earth; but if the salt has become tasteless, how can it be

made salty again It is no longer good for anything, except to be thrown out and

trampled under foot by men. 14“You are the light of the world. A city set on a hill

cannot be hidden; 15nor does anyone light a lamp and put it under a basket, but

on the lampstand, and it gives light to all who are in the house. 16“Let your light

shine before men in such a way that they may see your good works, and glorify

your Father who is in heaven. 17“Do not think that I came to abolish the Law or

the Prophets; I did not come to abolish but to fulfill. 18“For truly I say to you, until

heaven and earth pass away, not the smallest letter or stroke shall pass from the

Law until all is accomplished. 19“Whoever then annuls one of the least of these

commandments, and teaches others to do the same, shall be called least in the

kingdom of heaven; but whoever keeps and teaches them, he shall be called great

in the kingdom of heaven. 20“For I say to you that unless your righteousness

surpasses that of the scribes and Pharisees, you will not enter the kingdom of

a. Jesus' concern was with people who annul even the least of God's

b. He was concerned about teaching others to annul God's commands

c. Whatever he meant by surpassing the righteousness of scribes and

Pharisees, it flows out of what they did to God's word

d. You would think this would be a fairly easy problem to prevent or correct,

E. Today, I mostly want to share some personal experiences with you

1. You may or may not see the connection, but I think you'll understand that what is

crystal clear to one person isn't always clear to another

2. I want to encourage you to study the Scriptures and learn how to apply them to

your life, but I want you to be very careful about demanding things of others

before they have had the opportunity to do the same study

I. A Few Scriptures To Keep In Mind

A. It's always good to keep at least a few basics in mind

1. It is with some degree of fear and trepidation I launch this discussion today

2. I understand that it's likely one or more of my personal illustrations will touch

on one of your closely held beliefs or traditions

3. So let's all respect the teaching of the Scriptures as we deal with these issues, so

B. Let's keep these in mind too

the Pharisees, which is hypocrisy. NASB95

to all these things and were scoffing at Him. 15 And He said to them, “You are

those who justify yourselves in the sight of men, but God knows your hearts; for

that which is highly esteemed among men is detestable in the sight of God.

3. Matthew 15:1-9 1 Then some Pharisees and scribes came to Jesus from

Jerusalem and said, 2 “Why do Your disciples break the tradition of the elders For

they do not wash their hands when they eat bread.” 3 And He answered and said

to them, “Why do you yourselves transgress the commandment of God for the

sake of your tradition 4 “For God said, ‘Honor your father and mother,’ and, ‘He

who speaks evil of father or mother is to be put to death.’ 5 “But you say,

‘Whoever says to his father or mother, “Whatever I have that would help you has

been given to God,” 6 he is not to honor his father or his mother.’ And by this you

invalidated the word of God for the sake of your tradition. 7 “You hypocrites,

rightly did Isaiah prophesy of you: 8 ‘This people honors Me with their lips, But

their heart is far away from Me. 9 ‘But in vain do they worship Me, Teaching as

doctrines the precepts of men.’ ” NASB95

neighbor and hate your enemy.’ 44 “But I say to you, love your enemies and pray

for those who persecute you, 45 so that you may be sons of your Father who is in

heaven; for He causes His sun to rise on the evil and the good, and sends rain on

the righteous and the unrighteous. 46 “For if you love those who love you, what

only your brothers, what more are you doing than others Do not even the

Gentiles do the same 48 “Therefore you are to be perfect, as your heavenly

5. Matthew 6:1 1 “Beware of practicing your righteousness before men to be

noticed by them; otherwise you have no reward with your Father who is in

Sadducees, they gathered themselves together. 35 One of them, a lawyer, asked

Him a question, testing Him, 36 “Teacher, which is the great commandment in the

Law” 37 And He said to him, “ ‘You shall love the Lord your God with all your

foremost commandment. 39 “The second is like it, ‘You shall love your neighbor

as yourself.’ 40 “On these two commandments depend the whole Law and the

another, even as I have loved you, that you also love one another. 35 “By this all

men will know that you are My disciples, if you have love for one another.”

C. Of course those are not the only Scriptures we need to observe, but these are enough to

Some Personal Experiences To Note

A. Example of church in Misawa, Japan wanting to make a contribution to the "Far East

treasury to assist another church

B. Example of conversation with a man who said the church should not even allow a non-

accident occurred in front of the building

C. Example of a church where men without coats and ties were not allowed to serve

D. Example of someone who complained that an "invitation" was not properly offered at the

E. Conversation in which someone complained that they were distracted by the way we

observed the Lord's supper: taking it together and singing during the supper

F. In every one of these examples, somebody thought that the Scriptures were being ignored

1. The tradition or practice long observed is assumed to be the only way something

could be done, and to do otherwise was to break the Scriptures, not the tradition

2. One person's opinion, or traditional practice, was bound on others as the only

way to do something

3. Human reasoning, deductions drawn, and long-held practices were equated with

the actual statements of God

4. Nobody set out to oppose God, but we get awfully close to the exact problem of

5. Like the Pharisees could not see the problem, sometimes neither can we see the

A. Let's remember that Pharisees had many admirable traits

1. They wanted, more than anything else, to be obedient to God

2. But they ended up where they never wanted to be - enemies of God, having

3. In many ways, Pharisees were a "back to the Bible" people every much as we are

4. This is why we must pay attention to their mistakes, and be aware that the same

things can happen to us

B. Someone may say, "But this makes it all so hard"

1. Maybe it does, but we must watch the tendency to get comfortable in our

traditions, always questioning the other guy but never ourselves

2. It is worth the effort to distinguish between God's words and our own; between

God's ways and our own 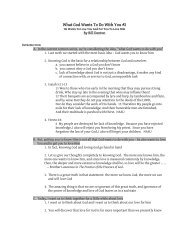 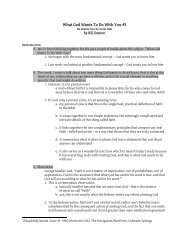 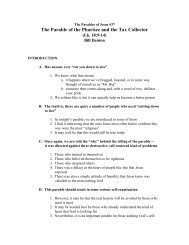 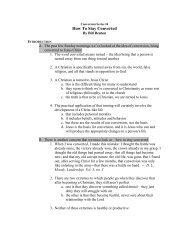 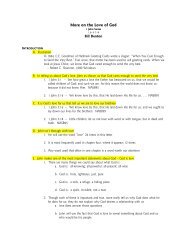 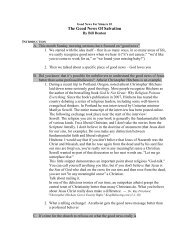 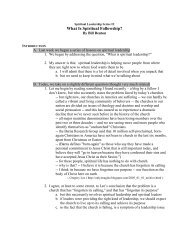 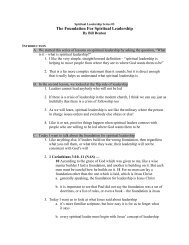 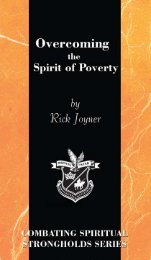 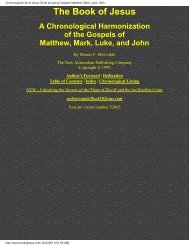 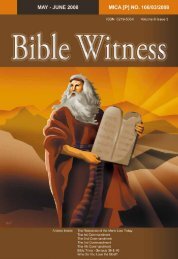 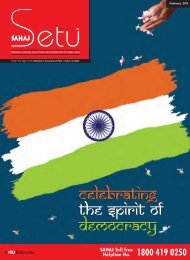 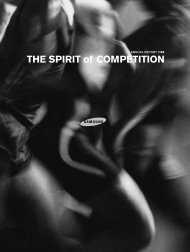 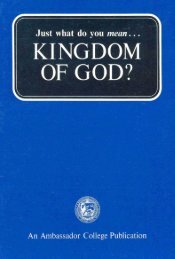 Magazine: The Spirit Of The Pharisees 5