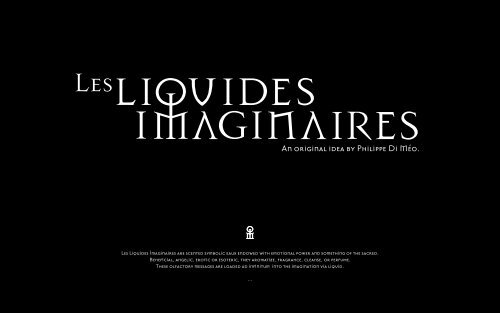 Les Liquides Imaginaires are scented symbolic eaux endowed with emotional power and something of the sacred.

These olfactory messages are loaded ad infinitum into the imagination via liquid.

The word perfume comes from the Latin per fumus meaning “through smoke“. Religious ceremonies evoked this reaction

through the burning of incense and resins. Perfume played its first role in the sacred as an offering to the gods.

Seduction and enchantment is its latest incarnation.

From Egypt to Greece, the Romans to the Arabs, from Marseille to Grasse, perfume has continued travelling, evolving,

expanding from the visual, the function, the scent and even the bottle. In perfume cellars that were reserved for the elite,

perfume was a veritable luxury, an object encased in crystal, gold, or other precious materials.

Perfume was launched as a fashionable trend first in Paris and then France soon followed as its capital.

Bottles, accessories and beauty products were all the rage and the sign of the times.

The contents and the container were at that time sold separately.

Might a method be invented by the extraction of volatile solvents and synthetic components. Manufacturing became

industrial and then quite rightly democratized. An olfactory pyramid was constructed allowing odour to evaporate

at different speeds. Perfumes for men became increasingly popular and French perfume reached its peak in the 1950s.

innovating, experimenting. Perfume has changed with the times and much less faithful to its origins. The market has

established itself with a desire to entice the largest part of the world. The charm has left, the scent has lost its magic,

and its imagination is no longer anything more than a base object of desire. It has left behind unforgettable trembling

and mythical fragrance, but nowadays what has happened to one of its most fundamental factors: intoxication!

- RETURN TO THE SACRED -

The essence of perfume must be taken back to the olfactory capital in order to dream, to purify, to bewitch, to

fantasize, to draw an imaginary scent of ephemera. Reinstalling ceremony, a ritual perfumed by developing new

materials, other gestures. Creating an exceptional bottle that is a call to craftsmanship and that is in its own right

precious. Contained within a mysterious object, an amphora, the archetype of all perfume.

These were the reflections and thoughts that gave birth to Philippe di Meo’s Les LIQUIDES IMAGINAIRES,

scented symbolic eaux endowed with emotional power and something of the sacred.

These olfactory messages are charged into the imagination via liquid.

“The passages of life are incarnated in tangible form: desires, beliefs, strengths, weaknesses.”

To create these perfumes, one must look to the masters of scent, a human encounter and an exchange

of expertise. This alchemy has been made with the complicity of Givaudan perfumers, experts in this domain.

Perfumers have let their noses soar to encounter these ”imaginary liquids”, letting go of constraints

and specifications in accepting the idea that a perfume might stain or even go up in smoke.

These fragrances are like puzzles, they are used to interpret thoughts, intentions, confessions.

They memorize passages of life, desires, beliefs, strengths and weaknesses.

These dual eaux, potions or antidotes, symbolize good and evil, night and day, wisdom and insobriety... opposing yet inseparable.

Contained in amphora bottles, the «reliquiae» are custom-made of pewter by the l’Orfèvrerie d’Anjou.

is the oldest symbol of purification.

Holy Water is a sacred protection that

Sprinkled abundantly on the face,

Froth of the soul

Pure water of the Phoenix

Blotting of the unpaired

Awash with flavours from the East,

ever-imprinting its fragrance upon paper,

fabric and other objects from home.

an indelible scent that renders

and sexuality. This source, fragrance

of well-being, relaxes tension and

stimulates the body in letting go.

Essential for a warm bath before

surrendering to its enveloping fog.

«The sense of mystery is to be always in doubt, double, triple aspects. Suspicion of aspects.»

This quote reflects perfectly the artistic direction I wanted to take in creating the visual atmosphere in film.

Create images in the image, forms that take other forms in the mind of the observer, drawing on a series of dreams ... gentle hallucinations.

Daniel Sannwald, German photographer, lives in London. His strange and dreamlike world appeared as a revelation.

Influenced by surrealism and expressionism, his visual imagination embodies the spirit and symbolism of these three liquids,

making the project his personal vision, his fantasy mixed with science fiction.

Daniel thinks like a craftsman, with the need to see, to touch in a real image. Creation perfectly «hand» made and right before our eyes.

At the time when the virtual and the postproduction remain to an extent unlimited, Daniel uses his material, live effects «no photoshop»

as he says. Last-minute improvisation is one of its drivers and engenders surprise.

Fire burns but the eye of the model appears through the flames as a chimera.

A girl dances, but her figure is much more than an immaterial form made of light radiating and moving in the wind,

ready to disappear like a ghost, a photogenic mirage.

Bodies, obscured by a soft distortion of antique glass, move in a kinetic wave creating a sensual fluid, a fuzzy and disturbing reality.

Daniel brought out the human incarnation of the imaginary liquid hidden within my jars.

The development of this project has been the result of a creative exchange with the perfumers of Givaudan.

Givaudan plays a major role in the fragrance and flavour industry. A rich heritage dating back to 1796 and a global presence in over 100 countries,

Givaudan was the first company to design and produce fragrances and flavors all over the world.

Their fragrances and flavors account for many of the better known brands in the sectors of luxury goods, consumer products,

as well as the beverage and food industry.

By an unreserved commitment to invest continuously in research and development programs, Givaudan ensures its leadership position.

By sharing its expertise, Givaudan shows how cutting-edge they are in going beyond simple demand, and showing their willingess in not only other

is both unique and innovative in spirit and in understanding.

The Amphorae «Reliquiae» are made to mesure in pewter by l’Orfèvrerie d’Anjou.

Pascal Blandin, but also Léon, François et Franck, worked with a will on this exceptional bottles, searchingly engraved with a diamond cutter.

When the metal is pure, we say that its brightness, which is used on the shields of the heroes of ancient Greece, was used to blind the enemy.

It dazzles, and centuries later, the great French aristocracy, when Louis XIV decreed that metal, like silver, be in the homes of the wealthy.

Noble, ecological, steel, tin becomes metal silverware in its own right. Heir to a long line of famous silversmiths born in the eighteenth century,

L’Orfèvrerie d’Anjou works today with the greatest creators in both the design world and the luxury industry.

The design of these amphorae is obtained by a variety of techniques ranging from laser cutting, mirror polishing, satin finishing, a day of engraving

Established since 1961, the Ateliers Norline specializes in manufacturing custom-made presentation cases for the cosmetic, perfume and

spirits industry. With this savoir-faire, the amphorae are meticulously boxed within a case of divine action.

The magnificient mansion located in the heart of the «Triangle d’or» just between les Champs-Élysées, l’Avenue Montaigne and le Grand Palais,

was the residence of Princesse d’Essling also stepdaughter of Maréchal Masséna. In 1919, the building became la Maison des Centraliens, since

1990 an additional building was added and renamed l’Hôtel La Maison - Champs Elysées in 2010.

The EXhibITION will ECHO to 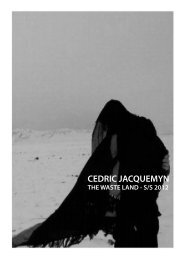 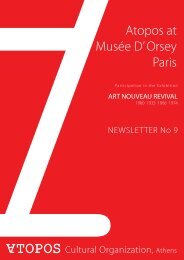 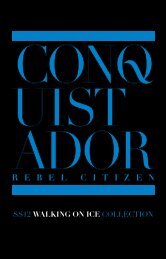 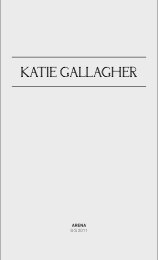