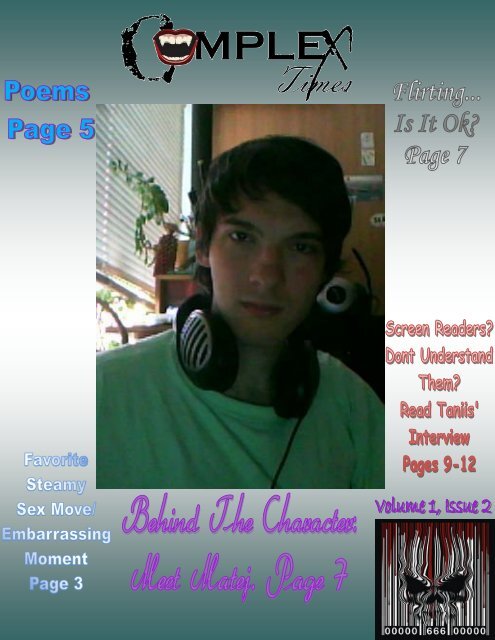 7. Behind The Character: Meet Matej

Favorite steamy sex move was and what your most embarrassing

Moment was. Here are some of your answers.

right side up as we are fused in a 69 position. It is nothing in this world better

than partners giving oral at the same time in such a unstable manner. After

all, we could lose our balance and crash on the bed or floor from that position, or

some other mishap go on, right?

impression on me for all time. I was a young man of 14 and I had known

already that I swung in both directions. The young man I had become quite

fond of was my same age and we were on the high school football team together.

After a game, we were wreckless and went out behind the gym and downed a

the flood lights came on in the yard and shined us to all of the world. We were

at the goods. Myself and him laughed about it for weeks in silent company but

in public I have to admit I had to work out my exhibition issues.

(Both entries by Trick)

like a fool, send a cop call. The groupies are here to

welcome you in any fashion they can. Look for

them in chat and try to interact with them. They are

here to help you feel less new. We want you to come

here, even if its your first site, like you’ve been here

before. Anything we can do to help is awesome and

just let us know via a cop call.

~ Hogwarts is always looking for new members and

has a sick reward and maxed buff. Feel free to join it

if you need a hand.

You could barely see our eyes

Through the cornstalk rows

Dirt on our knees and hands

We whispered our plans

As the sun dropped low

As the crickets began to sing

The stars chased the day

And played tricks on our eyes

With the lights of the fireflies

Within our hands we held

Hunters of the flittering glows

That raised into the air

We waited 'till the dew smelled fresh

Before we stole from our screen

As they danced their meandering path

We burst from the grasses laughing

Sending more into the air

Scooping them in our jars

We lay near the brook

The two jars between us

Lighting our faces with the dancing orbs

Well into the night

We open the lids and lay on our backs

Dozens of shooting stars, it seems

As they dissipate into the night

And take to flight

Life on a leaf

As each day before

The mountainous ridges to and fro

The clear drops of dew

A kingdom that will grow

With each passing day

Into a vast, green paradise

Portions of my kingdom

To consumers of my land

No battles are fought

The suns course will sink deeper

The nights will become stinging cold

And my land will change

Orange to yellow to red to dead

My kingdom will have

And fallen to your Earth

Philosophies of a wasted mind

Each moment is a precious time

Which intertwine in memories

A conscious mind of varied thoughts

The road we walk goes on and on

Through the dusk and dawn

A word that is so hard to say

Can raise you up or bring you down

Spins your head around

It knocks you to your shaking knees

Makes you fear the coming day

Takes your breath away

And I've seen the pain

Yet all the same

And I've seen the times

So you are a fan of someone? Want to show your love and

admiration? Then send them love mail or shout outs into the

magazine. (Text Sara). Below are some shout outs/letters of

You are one of the bestest friends in my

life. I met you on Tynastera and talk to

you mostly on skype. We have become

close in the last 8 months and its been the best. I wouldn't

change it for the world. I love you!

One of my staffers came up to me

should have an article about the

players and how they are outside

the game.” I sat and thought

about it and really thought it was

a good idea. The idea of this article

is to go behind the character and

talk about them. We hope it will

help you to get to know them as a

person and a character. We are

calling this, Behind The Character.

Enjoy! (Text Sara if you wanna be in the next issue)

attley is an admin on The Complex. He’s one of the best. He knows how to treat

hings. He’s fair, fun, smart, funny, a good roleplayer and a great friend and most of

ll there for you when you need him. Outside of roleplaying people know him as

atej. One of his nicknames that makes me laugh is Trouble Maker Meanie Pants.

e’s cute, adorable, and loved by many women. If you need a friend you can come to

atej because he loves the attention. He loves sports like, basketball, european footall

(soccer), handball, and volleyball. He can speak 5 languages. Those languages

re, croatian, bosnian, slovenian, english, and serbian. He loves to sing and is an

ver all amazing person in my eyes. You wanna know more just shoot him a text. Did

in a relationship. This is what you said:

Not unless you are in an open relationship; but even then I would look down on you.

as you can easily hurt the one you care for; I also believe you would be a fool to do

I don't think that it is okay to flirt while you are in a relationship, unless it is open. If

with others, it's something that I don't understand. If you are flirting with someone it

makes it look like you don't like the current relationship that you are in, and if that is

the case, then leave the person don't make it look like you would want to cheat on

them. If you do like the relationship then you shouldn't be flirting with anyone else

because you are already happy with what you've got.

I think it is quite alright to flirt with others while in a relationship. After all, nothing

an ass out of themselves by flirting with someone that you don't like. Or, maybe a

reach for your cock and crank it up for action. I personally would love to see my

partner flirt or even do it with another just so I could be ready for her later.

Some of you dont understand what a screen reader is or how they work. So

Taniis went and interviewed his friend that uses one. We arent telling you to

stop or change what you do. We just wanna shed some light on what you do

and how it affects a screen reader. So we hope this interview helps.

So tell me about yourself

I'm blind. I'm a Mom and have been blind since birth.

Yes, I do. Have played for almost ten years.

And you use a screen reader correct?

Now for the people out there, could you explain to us what it does?

A screen reader takes text and turns in into speech output, making it possible

for a blind person to hear what is written on a computer screen.

How is it to follow a busy lotgd village?

It does very well, for the most part, however, if there are a lot of graphics, it can

Speaking of problems, what about spam? like all caps locks, or more then one

posting right after one another, or gibberish?

That plays havoc with a screen reader as well...it can make it lose focus, or just

So would it even affect it if its a busy village?

The busier the village, the more it affects the performance of the screen

So its safe to say, spam isnt the main cause of problems with a screen reader,

but it is an annoying one correct?

not the main cause of problems, but, it does contribute to them.

how many lines of text pass through before there are problems? if you have

the answer to that question

I'm not really sure,...much depends not only on the repeated text, but

also on bold or italic letters. Some screen

readers such as JAWS just do not handle those very well.

For example, if a char posts in the village in bold or italic or underline,

does that include bold and italics in their names as well

It may look cool and wonderful for a sighted person, but, for a blind

person, it is a nightmare. When I ran my own site, i did not allow text

so you would not even know that someone is interacting with you? or

would it just omit the name?

You can see what they post, you just cant respond.

The more graphically enhanced the site is, the less a blind person can

game over the years, but, sighted people need to remember that bold,

underlined, and italics are still a nightmare for us.

So how would one know that plays Lotgds, that use a screen reader,

know that the site is graphically advanced?

By the way the screen reader behaves.

Mine will tell me that that are graphics, it just won't tell me what they are.

And in some cases, they prevent me from being able to use the links for navigating

Would a person such as yourself that is blind, message the owners or staff about

your situation if you came across a server like you described, or do you just dont

There are site owners who will try to make it better for us to play, but some don't

care. they have a bad attitude about it, and those are the ones we don't go back to.

So it is safe to say, if no requests came along about offering changes, that means no

one on site uses a screen reader?

not really. a lot of blind people are timid about asking for changes to be made, because

I played a char on a site once and married a character. He divorced me when he

found out that I was blind and called me a freak. it happened to others as well.

I myself am an older player and don't much care about the opinions of some. but

Anything you would like to say to the players of Lotgds?

Just treat us like you would treat any others, and show consideration.

Thank you very much for taking time to answer my questions

That concludes Taniis’ interview . We hope you have a better understanding of