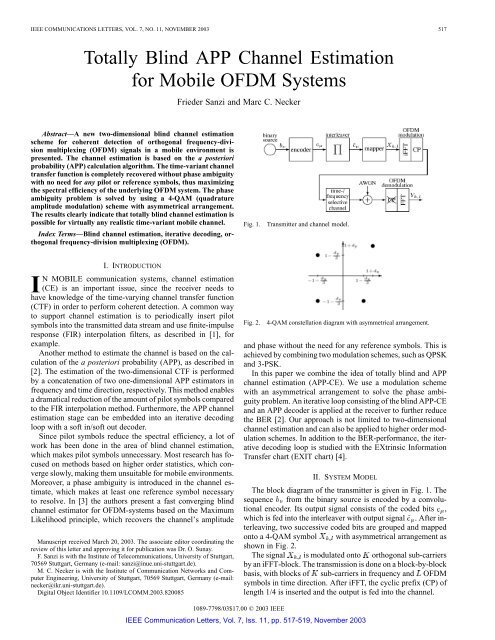 multiplexing (OFDM) signals in a mobile environment is

presented. The channel estimation is based on the a posteriori

with no need for any pilot or reference symbols, thus maximizing

the spectral efficiency of the underlying OFDM system. The phase

ambiguity problem is solved by using a 4-QAM (quadrature

The results clearly indicate that totally blind channel estimation is

(CE) is an important issue, since the receiver needs to

have knowledge of the time-varying channel transfer function

(CTF) in order to perform coherent detection. A common way

to support channel estimation is to periodically insert pilot

symbols into the transmitted data stream and use finite-impulse

response (FIR) interpolation filters, as described in [1], for

Another method to estimate the channel is based on the calculation

of the a posteriori probability (APP), as described in

[2]. The estimation of the two-dimensional CTF is performed

by a concatenation of two one-dimensional APP estimators in

a dramatical reduction of the amount of pilot symbols compared

to the FIR interpolation method. Furthermore, the APP channel

estimation stage can be embedded into an iterative decoding

loop with a soft in/soft out decoder.

Since pilot symbols reduce the spectral efficiency, a lot of

work has been done in the area of blind channel estimation,

which makes pilot symbols unnecessary. Most research has focused

on methods based on higher order statistics, which converge

Moreover, a phase ambiguity is introduced in the channel estimate,

which makes at least one reference symbol necessary

to resolve. In [3] the authors present a fast converging blind

channel estimator for OFDM-systems based on the Maximum

review of this letter and approving it for publication was Dr. O. Sunay.

F. Sanzi is with the Institute of Telecommunications, University of Stuttgart,

M. C. Necker is with the Institute of Communication Networks and Computer

and phase without the need for any reference symbols. This is

achieved by combining two modulation schemes, such as QPSK

channel estimation (APP-CE). We use a modulation scheme

with an asymmetrical arrangement to solve the phase ambiguity

problem. An iterative loop consisting of the blind APP-CE

the BER [2]. Our approach is not limited to two-dimensional

channel estimation and can also be applied to higher order modulation

schemes. In addition to the BER-performance, the iterative

decoding loop is studied with the EXtrinsic Information

The block diagram of the transmitter is given in Fig. 1. The

sequence from the binary source is encoded by a convolutional

encoder. Its output signal consists of the coded bits ,

which is fed into the interleaver with output signal . After interleaving,

onto a 4-QAM symbol with asymmetrical arrangement as

The signal is modulated onto orthogonal sub-carriers

by an iFFT-block. The transmission is done on a block-by-block

basis, with blocks of sub-carriers in frequency and OFDM

symbols in time direction. After iFFT, the cyclic prefix (CP) of

length 1/4 is inserted and the output is fed into the channel.

For the mobile channel we use the wide-sense stationary uncorrelated

The time varying CTF can be expressed as

The variable denotes the number of propagation paths;

the phase is uniformly distributed, the delay spread exponentially

. The Doppler-shift is distributed according to Jakes’

power spectral density. The autocorrelation function in time is

, where is the duration of one

and the maximal Doppler shift. The complex auto-correlation

function in frequency direction can be calculated as

where is the sub-carrier spacing and is the discrete

frequency index. is chosen such that

with being the maximal delay spread.

points after removal of the cyclic prefix and OFDM demodulation

whereby are statistically i. i. d. complex Gaussian noise

are sample values of the CTF.

The signal is fed to the two-dimensional blind APP-CE

stage as shown in Fig. 3. This stage outputs log-likelihood ratios

on the transmitted coded bits which are deinterleaved

and decoded in an APP decoder. Iterative channel estimation

and decoding is performed by feeding back extrinsic information

on the coded bits; after interleaving it becomes the a priori

knowledge to the blind APP-CE stage.

of two estimators for frequency and time direction, respectively

[2]. This estimation algorithm exploits the time and frequency

continuity of the CTF at the receiver.

For one-dimensional APP estimation, the symbol-by-symbol

MAP-algorithm is applied to an appropriately chosen metric.

To help understanding, the symbols at the transmitter in

Fig. 1 can be thought of being put into a virtual shift register at

the output of the mapper. Owing to this “artificial grouping” the

of the CTF at the receiver.

At frequency index , the APP estimation in frequency direction

is characterized for OFDM symbol with

by the metric increment

whereby the FIR filter coefficients are calculated with the

Wiener–Hopf equation based on the frequency auto-correlation

function [2]. is the prediction order. The denote

the hypothesized transmitted data symbol according to the trellis

structure and the are the L-values of the coded bits

which are fed to the APP estimator in frequency direction. The

of . The term is the variance of the estimation

error in frequency direction according to [7]. The APP estimation

taking the time auto-correlation function of the CTF into

as shown in Fig. 3. The output of the APP estimator

in frequency direction becomes the a priori input

of the APP estimator in time direction. The prediction order for

estimation in frequency and time direction, respectively, is set

to two in the following.

The concept of totally blind channel estimation was first

introduced in [3]. It is founded on the idea of exploiting the

correlation of the CTF in frequency direction and using two

to resolve the phase ambiguity. If the CTF does not vary

fast in frequency direction, the receiver can determine symbols

sent on adjacent subcarriers without any ambiguity by

If only QPSK is used,

has to be chosen,

introducing the well known phase ambiguity. This can be

adjacent subcarriers. Let be a signal point of the first

PSK-modulation scheme and a signal point of the

the angle between both signal points in the complex plane,

the signal points must be chosen such that no two angles

are identical for all possible signal point combinations. For

example, QPSK and 3-PSK fulfill this condition. In this case,

the equation system (6) and (7) can be solved without any

phase ambiguity, since can no longer be chosen arbitrarily. In

the noisy case, an ML-approach has to be used [3]. Simulations

and TU. For channels with longer delay spreads, this concept

imposes problems as the condition of a slow varying CTF in

frequency direction only holds for some subcarriers.

The APP channel estimator calculates the most likely

symbol sequence in consideration of the time and

diagrams the transmission of pilot symbols is mandatory

necessary [2], as any symbol sequence is a possible

solution for the APP-CE. Extending the concept of totally

blind channel estimation to APP-CE, we can use a modulation

scheme with an asymmetrical constellation diagram, e.g., as

shown in Fig. 2, to solve the phase ambiguity. Again, this is

possible because can no longer be chosen arbitrarily.

We use a sub-carrier spacing of kHz and an OFDMsymbol

s. The cyclic prefix of length

For the block-wise transmission we use adjacent

was chosen for the 4-QAM modulation according to

Fig. 2, and Gray mapping with two bits per symbol was used.

Hence, the interleaving depth is .

As an example, the used convolutional code is recursive systematic

Note, that in the following all -values are given with respect

to the overall information rate

The simulations were done with different maximal Doppler

performance measure, the bit error ratio (BER) at the output

of the hard decision device of the receiver in Fig. 3 is used.

BER for iterative blind APP-CE after 0 and 2 iterations.

Furthermore, we apply the EXIT chart [4] to gain insight into

the convergence behavior of the iterative decoding loop.

dB. The trajectories show the exchange

of information between the blind APP-CE stage and the APP

Hz, the trajectory ends at the intersection

of the characteristic curves after one iteration. For

Hz the characteristic curve of the blind APP-CE

stage starts at a lower mutual information , resulting in a

In Fig. 5 the BER is shown for the proposed system. As can

The concept of totally blind channel estimation was successfully

result is a true blind channel estimator, which is capable of

its absolute phase. This is achieved without the need for any

the underlying OFDM system. Our results clearly indicate that

totally blind channel estimation is possible for virtually any realistic

with product codes in multicarrier systems,” in Proc. IEEE Vehicular

[5] P. Höher, “A statistical discrete-time model for the WSSUS multipath 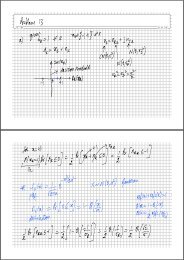 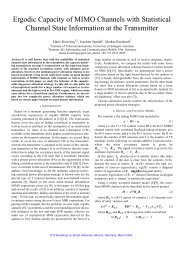 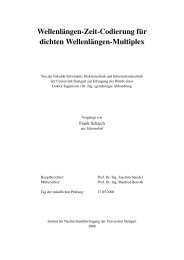 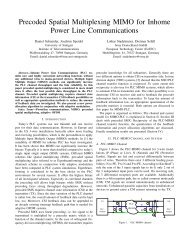 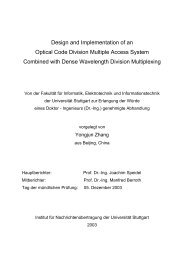 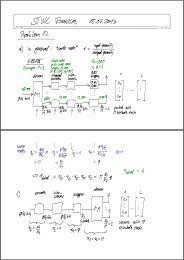 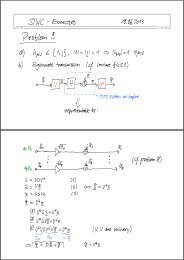 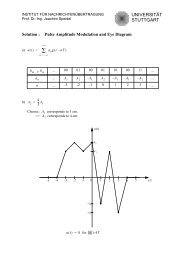 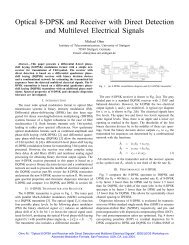 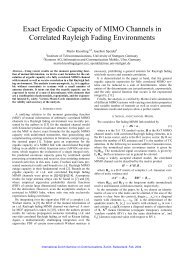 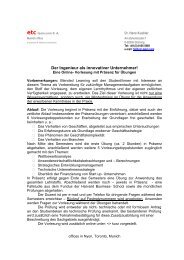 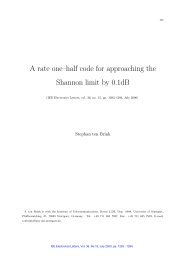 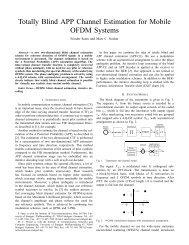 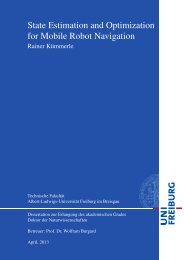 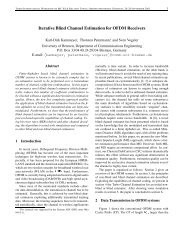 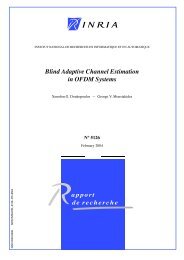 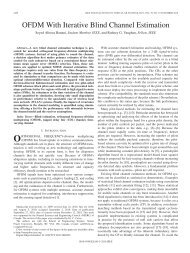 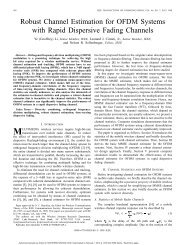 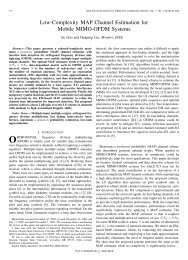 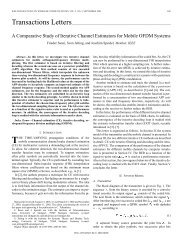 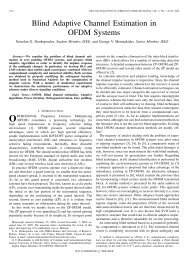 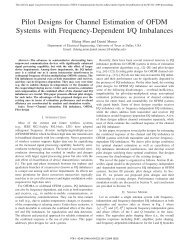 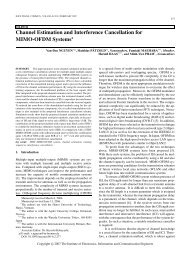 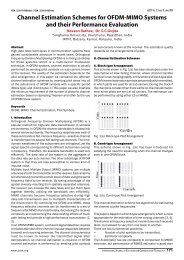 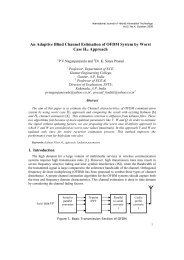 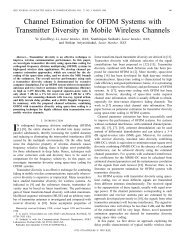 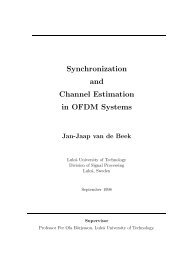