WHILE VISITING THE CITY

SEE THE PROFILE OF

THAT SHELTERS THE CITY’S

EVENTS IN THE CITY

Business tourism is still the main reason visitors come to the city of São Paulo,

The year of 2011 was a breakthrough

in the city of São Paulo. The

serving the city recorded an annual

surge in passenger of around 13.6% in

2011. Hotels also accounted for an annual

In 2011, total revenue gained from

tourism-related activities in the city

was more than R$ 10 billion. With the

increase, the collection of service tax

higher in 2011 than in the previous year,

totaling R$ 200 million in taxes for the

448 thousand jobs in the tourism sector

Business is the main reason that leads

participation in fairs and events. One

of the favorite leisure options of the

foreigners is eating out and Brazilian

tourists how more interest in shopping.

Most visitors are under 49 years of age,

are male and have a high education level.

In the near future, the city will host

Marginal Pinheiros skyline, west end of São Paulo: the forecast is that 16.5 million tourists will visit the city in 2020

Where the local tourists come from*

Where the international tourists come from*

The tourists that come to the capital are

and have more time to have fun, seek medical

treatments and do courses

and more time in the city

he amount of overnight stays of foreign visitors has

increased in São Paulo since 2009. The average

tourists visiting the city spend less than Brazilians: they

have daily expenses in the city of R$ 465 while Brazilians

For 58% of the visitors, the main reason for the trips is

business. Participation in fairs and events comes in second

with 21%. When the tourists decide to spend a few extra

days in the city, work is the main reason claimed by 41%

During their free time, the visitors shop, eat out and

enjoy São Paulo’s night life. Among the foreigners who

North America and Europe. Most of the tourists, around

31%, are Americans and Argentines come in second. Most

tourists who come to the city stay at hotels and flats

for work. Visitors coming for work or to attend

67% of the total. But when they decide to stay in the

capital for a few more days, the main motivation for the

extra day is not work. Among those who extend their stay,

52% want to enjoy the leisure and entertainment options of

the capital city or just want to shop. A total of 30% of the

at the top of the visitor’s list. Residents of the cities of

Campinas, Ribeirão Preto and Sorocaba are those who

most visit the capital. Among other Brazilian States, Rio

de Janeiro heads the list of tourists, followed by Minas

Gerais, Paraná and Rio Grande do Sul Those who stay longer

in the city want mostly to shop, eat out and enjoy the

nightlife of the capital. Still others enjoy the free time to

are spending more and more in São Paulo. In 2009, every

traveler spent on average R$ 350 a day. This amount rose

A survey conducted in 2011 with Brazilian passengers

at the International Airport of São Paulo in Guarulhos

Paulo were cuisine, shopping and cultural attractions and

entertainment. According to the survey done at the airport,

the main means of accommodation for tourists is the hotel,

however staying at the homes of relatives and friends is

The reason for not staying longer in São Paulo is no

spare time – more than 65% - in both segments (brazilian

opinions or specialized treatment. In the first

the total amount of visitors, up 62%.

seeking medical treatment and nearly half go to the

the United States, Spain, France and Indonesia. Besides

having high-quality care, it is more advantageous for those

coming from abroad to pay for the treatment in reais than

in dollars or euros.

The average daily expense of the tourists in this segment

comes to town for other reasons. With an average stay of

3.5 nights, the amount disbursed in the period reaches R$

physicians, São Paulo is an international benchmark in

clinics for visits, medical procedures or just for a simple

checkup. The highlights are the treatments of heart disease

and plastic surgery, among other branches of high

complexity. The hospital sector has front-line services and

there is an extensive diagnostics network at the disposal of

In addition to the vast medical infrastructure, the visitors

also enjoy the tourist options of the city. Research indicates

that the secondary activities of health-oriented tourists

in the city are shopping and dining. São Paulo is also

seeing the expansion of the “day-hospital” concept.

In millions of tourists

crowds to the capital

n addition to business and fairs, São Paulo has attracted

of its sports and culture agenda. Great shows,

concerts and attractions, such as the Grand Prix of Formula

tourists to the capital. Sports events attract an audience

that is predominantly male, older, earns more and spends

more and stays in hotels. Among the spectators of the F1

degrees and 27% reported an income between 10 to

15 minimum wages. The average amount spent on the

In 2011, November was the month that recorded the

best occupancy rate in the hotel sector, 75.6%. Part of

this result is attributed to mega events such as the Brazil

and the Duas Rodas auto show, which attracted 255

thousand visitors. The audience that comes to concerts is

younger, made up largely of students from 18 to 24 who

have a lower income. At the concert of the band Red Hot

Chili Peppers, for example, 49% were students, with an

average expenditure of R$ 448. The number of foreigners

attending concerts in the city is not very significant

and visitors from cities nearby or from neighboring

states prevail. In sports events as well as in concerts, the

average stay is three nights in the city.

and is expected to receive 15 million tourists in 2014.

Among the foreigners, more than 90% claimed that they

would like to return to São Paulo to watch the games.

São Paulo is investing in infrastructure, such as the expansion

of airports, road works and hotels.

Football Museum at the Pacaembu stadium, west end: World Cup is expected to bring 14 million tourists to the city

he hospitality industry of São Paulo reached a 69%

recorded in 2010, and it was also the highest since

economy and 8% fall into the luxury category. The average

In the city, large international chains such as Hyatt,

Sheraton and Hilton fight for customers with exclusive

and luxury options, such as Fasano, Emiliano and Unique.

Paulo have an efficient structure to house conventions. Out

of a total of 390 hotels and flats, 194 of the establishments

have areas for events, totaling 939 rooms.

An important indicator to show the growth of the tourism

sector is the collection of Service Tax (ISS), a municipal

tax on activities of companies and independent professionals.

The total collected by the group that includes the

to 2.5% of the total of ISS collected in the year by the municipal

The largest concentration of rooms is in the downtown

area and in the west and south section of São Paulo. The

Another lodging option in the city are the hostels, which

city has 23 hostels that charge on average R$ 41 per room.

A survey conducted at the Tourist Information Centers

(CITs) traced the profile of tourists who choose to stay

with friends and relatives. Most are women, under 40,

Leisure travel in the city

São Paulo is known as a hub for business and events,

but the tourist profile has changed. In the first half

An official city tour has started to be set up in 2012. The

Liberdade, the College Courtyard and the Municipal

Theater. São Paulo is not only the biggest economical center.

It is the capital of culture, fashion and entertainment.

In millions of passengers

What brings tourists to SP

Business and events are the reason 70% of the visitors

he main reason for visitors to come to São Paulo

is work. Business is listed first, at 45%, among the

reasons to visit the state capital. Secondly, are the

fairs and events, with 24.4%. In addition to concentrating

the largest companies in Brazil, the capital city has a vast

network of hotels, good restaurants and the infrastructure

The city has 2.5 million square meters of exhibition

area for the lease and has a multitude of service providers

for the organization of conventions. São Paulo is home to

75% of the Brazilian fair markets. The capital records the

nearly R$ 4 billion in revenue. In São Paulo, an event is

held every six minutes, which makes the city the 12th destination

in the world for international events.

The city launched in 2012, the website Mice São Paulo -

cidadedesaopaulo.com/mice), which brings together more

than 200 areas for events in the capital. The purpose of this

tool is to help companies find locations for conventions

A law was enacted in 2012 establishing the Expo-SP

Park Event , a complex for large events in the neighborhood

of Pirituba in the western zone of the city. The area

will include a fair and exhibition pavilion, a convention

center, a shopping center, a business center, hotels and offices.

If the city is chosen, it will be the first time that the

event will be held in Latin America. The complex covers

the Anhembi Park, currently the largest in Latin America. 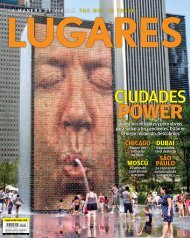 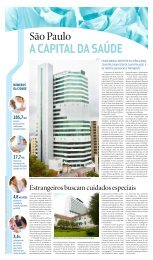 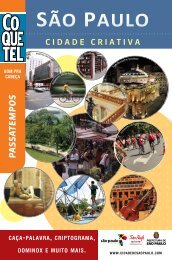 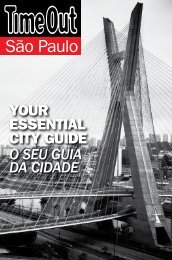 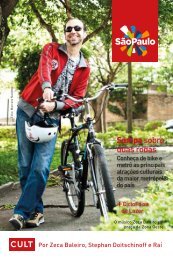 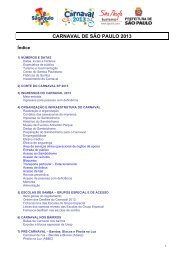 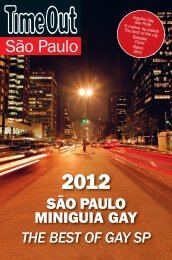 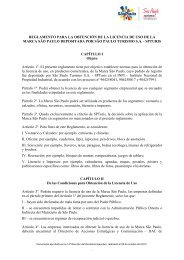 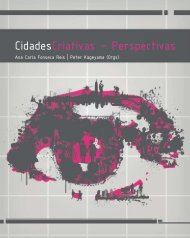 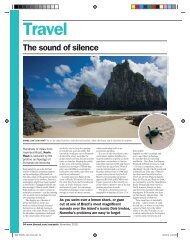