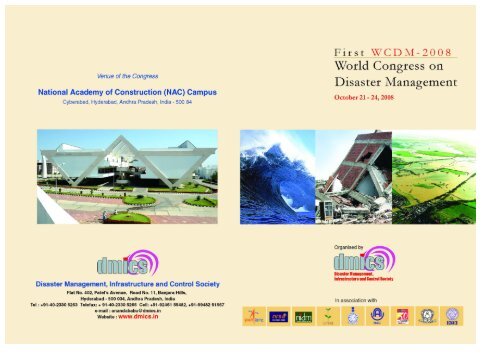 IN spite of the rapid strides registered in science and technology, human society is still vulnerable

to natural as well as man-made disasters. Excessive exploitation of natural resources to

meet the ever-increasing needs of the society is one principal cause of the disasters.

enhanced impact of disasters. Understandably human society struggles to come to terms with

Of late disasters like earthquakes, tsunamis, cyclones, floods, landslides, droughts and many

other hazards have been occurring with alarming frequency. The super cyclone of 1999 killed over

a 100 000 people in Orissa besides causing wide spread destruction. The December 2004 tsunami

exposed several to live without shelter in harsh winter. The Kolkata fire of January 2008 raged

uncontrolled for nearly 5 days in a commercial building, causing losses of billions of rupees.

to mitigate the sufferings of mankind after every disaster. Such an attitude should lead to framing

policies, initiating interventions, and collaboration and cooperation amongst all layers of society on

a global scale. A holistic approach is required to focus the efforts of disaster management for the

organisations, and NGOs. We look forward to an overwhelming response from all over the world

for this event, expected to be another landmark in formulating disaster management policies and

would involve disaster management specialists worldwide. The themes of the Congress include

disasters identified by the High Power Committee of the UN. The Congress is planned from

co-operation and local preparedness besides the development of infrastructure. Control

systems to detect, warn and initiate steps to contain undesirable events and to trigger personnel

volition and mobilisation are as essential as the infrastructure, planning, management and intervention

policies which also form the themes of the Congress.

The Congress would involve professionals from all walks of life in order to bring together scientists,

academic bodies and others dealing with disaster related activities, with a view to focusing on the

The Congress provides a common platform to discuss and plan

to a wide section of society. Some of the aspects of primary

focus are listed below:

1. Creating awareness among the vulnerable communities, particularly in the developing

2. Dissemination of warnings to the first responders, especially to the people and the

communities likely to be affected.

3. Involvement of communities in planning, organising and implementing local-level

action plans through disaster taskforces in all the three, pre-,co- and post- disaster,

as an essential component.

5. Formulating the best practices to deal with the problems that follow a

6. Incorporating accountability and transparency in the policies to be

7. Preparation of and training in Disaster Management plans on area-specific and hazard-specific

8. Sharing of experiences in implementation of policies and action plans of

9. To review the techniques of treating post-traumatic stress disorder

10.Planning of budgetary allocations at national and state government levels for

11.Training and updating knowledge and skills required to handle various

13.To assess the risk management visa-a-vis the insurance sector.

14.To appraise in preparing the communities to face disasters and appraise the roles of

15.To create awareness among academic institutions, and capacity building of the youth

16.To enlarge the pro-active role of corporate sectors following a disaster in medical,

health, IT and industry related sectors.

17.To protect the Involvement of women and children in disaster prevention and

18.To appraise welfare of the aged and differently abled persons.

19. To investigate social and economic effects of disasters.

THEMES OF THE WORLD CONGRESS

responsibility to spread awareness and involvement of all sections of the society.

I. WATER AND CLIMATE RELATED DISASTERS

Natural disasters strike unexpectedly and cannot be controlled, while others are brought

about by avoidable or unconcerned attitudes and actions of people. The actions of 'greed'

rather than 'need' bring about disasters of global concern. They are:

"Terra firma" is the term given to describe the earth, which occasionally

'shrugs' or 'shakes' disproving our faith in the 'firma'

concept. It is necessary to understand and evaluate such

instances to prepare preventive plans for any subsequent disasters

using the current techniques, such as GIS and Remote

Sensing. Some of the Geological Disasters are:

Improper maintenance and operational practices in industries result in

disasters. Economic development due to industrialisation should not lead

to environmental degradation and disasters. Such disasters are:

improper use of materials are known to lead to disasters, besides hostilities.

Disasters of such a kind are as follows:

Many countries experience various types of terrorism resulting in loss of life and property. This

theme delves deep into the reasons and preventive management methodologies. Some such

Medical disasters are preventable by right diagnosis, treatment and care by medical profession.

The role of physicians, pharmacists as well as patients is significant in the prevention

and elimination of such disasters, which are as follows:

This theme includes a wide variety of cases that could be avoided, especially the human

Disasters have direct impact on the people by affecting the quality of life.

Some social disasters are:

❍ NEGLECT OF AGED AND DIFFERENTLY

play havoc with the life time savings of investors. Such disastors include:

at different sessions. Abstracts of the papers, not exceeding 500 words, along with postal

or e-mail. Authors from overseas may send their papers early to facilitate visa processing.

a hard copy and CD RoM may be sent to the Convener by the due date. The Technical

Committee may review the papers and edit them to suit the publication needs. Selected

papers will be published in the final proceedings, planned to focus on different themes of

resources, technologies and methodologies for fast track completion of projects

and ensures quality of work, adherence to schedule and to have long lasting aesthetic construction.

Established on 67 acres of prime land in Hyderabad, allotted by the Government

of Andhra Pradesh, the Academy runs on the basis of voluntary contributions of contractors

of the construction industry. The campus has a large auditorium, seminar halls, classrooms,

Hyderabad is a bustling 400-year-old city with a teeming urban population of 7.5 million.

Cosmopolitan and rich with varied cultures, the city presents an old world charm with beautiful

monuments of memorable architecture built in the medieval, Moghul and colonial styles.

The history of Hyderabad can be traced to the establishment of the Qutb Shahi dynasty.

merged into the Indian union in 1948. Hyderabad became the capital city once again with the

formation of Andhra Pradesh State in 1956.