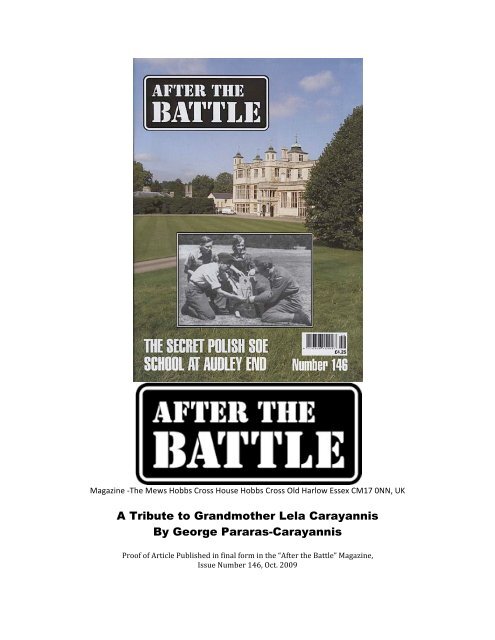 A Tribute to Grandmother Lela Carayannis

Then and now. George Pararas-Carayannis is the adopted grandson

of Lela Carayannis who during the war led the largest resistance

organisation in Greece. Left: George is pictured outside

the family home at No. 1 Limnou Street in Athens. Right: After

the war George became one of the world’s leading authorities

on Tsunamis and the earthquakes which trigger them. He retired

Athens, Greece, the hush of the morning

dawn was broken by harsh rattle of German

machine gun. This was a familiar sound in

the foothills of Dafni, near the concentration

camp of Chaidari, as German execution

squads routinely carried out their orders.

Many of the occupants of the camp were

Greek patriots, and on this particular Friday

it was the turn of a grandmother, Lela

Carayannis, to be executed. She was the

leader of the Greek resistance/intelligence

organisation known as ‘Bouboulina’ and she

was shot along with 71 of her followers and

co-workers. Death for Lela was a form of

freedom and probably a welcome release for

her mortal body which, for three solid days,

had been subjected to cruel torture by her SS

interrogators. One by one her fingernails had

been forceably removed and wounds

inflicted on her body with razor blades, the

cuts being salted for maximum pain.

Witnesses observing from the hills above

Daphni reported that just before the execution

the group of prisoners, led by Lela

Carayannis, began to sing and that Lela led

them in the Zallogos, a symbolic Greek

dance of defiance in choosing death rather

than loss of freedom or submission to the

enemy. This had been the song and dance of

the women and children of Messolongi in the

War of Independence from the Turks (1821-

cliff at Messolongi, choosing death rather

than capture by the Turks.

Following the German invasion of Greece

the occupation of the country that Lela

Carayannis had begun forming her organisation.

It started with efforts to help those

Allied soldiers left behind after the evacuation.

Lela came to their rescue setting up

Commonwealth soldiers were brought in by

The rescue operations quickly grew and

Lela’s initial efforts were to provide care and

refuge for hundreds of Allied and Greek soldiers

and airmen trapped in the country. She

organised safe houses where the wounded

could be treated and prepared for escape

over the mountains to rejoin their units. She

which moved the men from island to island,

coming ever-closer to the Allied bases in the

grew in numbers as more and more

as Director of the International Tsunami Information Centre of

the street has been renamed Lela Carayannis (Karayiannis in

Greek) (below). A plaque on the front door reads: ‘This house

A TRIBUTE TO GRANDMOTHER LELA CARAYANNIS

Lela’s organisation was named after

in the country’s War of Independence

against the Ottoman Empire in 1821. She

was shot dead in a family argument in

The Italians invaded Greece on October 28, 1940 followed by German forces which

opened a front in the Balkans on April 6, 1941. Above: This parade was held in front of

the Memorial to the Greek Unknown Soldier. Below: The memorial is located by the

for three years until a member of her group was apprehended and, under brutal

interrogation, betrayed her. She was arrested in the Red Cross Hospital in the city.

Lela Carayannis was a woman with

remarkable self-control, nerves of steel and

an iron will. She also possessed admirable

were recognised and she inspired the respect

of everyone around her. Within a very short

period she managed to set up a team of more

than 150 Greeks from all walks of life whom

she could trust and who were willing to join

the resistance. She formed them into intelligence

units and later into assault teams to

fight the invader. Her organisation was given

the code-name ‘Bouboulina’ after her own

great grandmother, the Greek heroine in the

war of independence over 100 years earlier.

She collected men to fight with her against

the enemies, and raised the Greek flag on

board her largest ship, the Agamemnon to

begin a naval blockage against the Turks, losing

her eldest son in the action which culmintated

— after her death — in the battle of

Navarino in 1827 — the last major battle

Left: She was taken to the Gestapo headquarters located in

Merlin Street where she was subjected to horrendous torture

to reveal the names of the other members of her organisation

but her interrogators failed to break her indomitable spirit.

Centre: Today No. 6 Merlin Street in central Athens has been

replaced with a modern department store yet one of the

reminder of the horrors of former days (right).

Lela, together with several members of her family, were taken

to the concentration camp at Chaidari. This was the largest

and most notorious camp in Greece, becoming known as the

‘Bastille of Greece’, and was established in 1943 on the

grounds of a Greek army barracks. It has been established that

during the following year over 20,000 people passed through

its doors, the Jews en-route for extermination at Auschwitz,

the others for using as forced-labour in Germany. It is believed

that over 2,000 of the inmates were executed. Today photography

is banned in the whole area but this Google image has

permitted us to circle Block 15.

In the months following the German occupation,

Lela expanded her activities to cover

every aspect of effective resistance and intelligence.

She managed to plant members of

her team in many German offices, including

the local Kriegsmarine and Luftwaffe commands,

and in the German and Italian high

commands. Not only did she have Greek

patriots helping her but she even managed to

recruit agents from the enemy’s own ranks:

anti-fascists; and Germans who had married

Greek women. In the end she was

receiving information on German army and

and on movements of supplies and personnel.

This intelligence was, in turn, wired or

forwarded to the Allied headquarters in the

for nigh-on three years, a member of her

organisation was caught and interrogated.

This led the Germans to Lela and on July

Hospital where she had been taken after

she became ill. On August 14, in the office

of the Gestapo interrogator Fritz Bäcke,

(traced and eliminated by the Mosad after

the war had ended) Lela was brought face

to face with her assistant who had been tortured

and broken by the German interrogators.

For three days Lela was tortured

cruelly by her captors but they were unable

to get a word out of her. Frustrated and

humiliated by Lela’s courage and strength

of character, Bäcke finally gave up. He

closed the file on the ‘Organization

Bouboulina’ with the words: ‘Lela

Carayannis, the most dangerous spy in the

Above: For many years Chaidari remained neglected, all visits being forbidden as it

lay within a military base and today only Block 15 survives, formerly used for the

solitary confinement of its prisoners.

followers were executed in what is now

the Diomideios Garden — the Botanical

Garden now in the grounds of the University

of Athens. Right: The local municipiality

was the road that many fighters walked

down to their execution.

it became possible to gather in front of Block 15 which is now a listed monument.

Shortly thereafter, Lela and four of her

children, her sons, Byron (my stepfather)

along with Nelson, and two of her daughters,

Ioanna, and Electra, were transferred

to the concentration camp at Chaidari

where they were subjected to horrific torture

and abuse. In the early hours of that

before Lela and 71 of her followers were

and some of her co-workers held in another

part of the camp, destined for execution the

following day, managed to escape with the

help of an anti-Nazi German. They went

into hiding in Athens and did not learn of

their mother’s execution until several days

later. Such was the fate of Lela Carayannis,

a simple housewife forced by circumstances

to rise to martyrdom, in defence of her

country. After the war Lela was awarded

the highest medals for valour, and members

of the Allied forces whose lives Lela had

touched and saved, wrote and expressed

their gratitude and appreciation.

sacrifice are remembered every year in

Greece on the anniversary of her execution.

among the high rises, and is now listed in the

National Register of Historic Buildings. The

street has been renamed Lela Carayannis

Street and her marble statue can be seen in a

small square near the Athens Museum.

There, every year on September 8, Government

officials and citizens gather to hold a

memorial service paying tribute to her and

remembering the fallen patriots of the

The dramatic circumstances how war converted

a simple housewife and mother of

seven children into a resistance fighter of legendary

to become a national symbol in Greece.

Today her example of heroism and altruism

teaches and inspires younger generations of

Greeks about the value of freedom and

searching with his mother for Lela’s

body. After the war, the Greek government

had her remains exhumed and reburied in

this tomb in the First Cemetery of Athens.