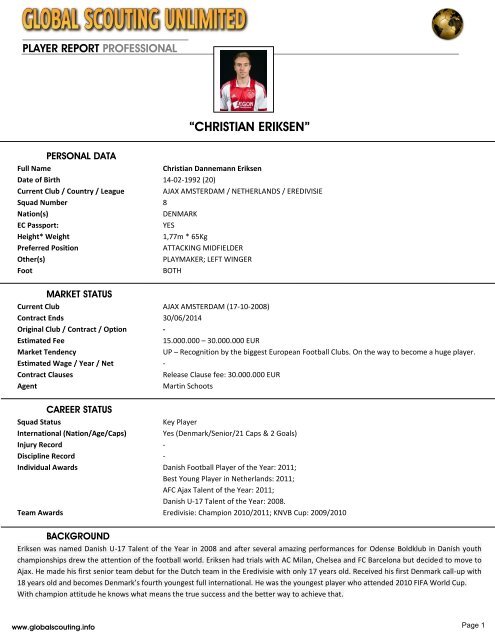 UP – Recognition by the biggest European Football Clubs. On the way to become a huge player.

championships drew the attention of the football world. Eriksen had trials with AC Milan, Chelsea and FC Barcelona but decided to move to

Ajax. He made his first senior team debut for the Dutch team in the Eredivisie with only 17 years old. Received his first Denmark call-up with

With champion attitude he knows what means the true success and the better way to achieve that.

Stands out for his passing abilities with great vision, nice dribbling skills and acceleration, off-the-ball movements and

creativity/versatility which he likes to apply from the last half of second third with effectiveness and intelligence.

With 1.77m/65kg he is agile enough and has the ideal combination of height/weight for his style of play, even he reveals some problems

in first physical touch; opponent’s intimidation due his lack of strength/volume/explosiveness.

Can be more effective in jumping even sometimes shows a good jumping-range.

With nice acceleration he can be more effective in the immediate moment of change of speed.

Some general fitness fragilities which can influence in the recovery of an eventual serious injury.

Intelligent player with professionalism and ambition to be successful in the world of football.

He is not brave, should improve his aggressiveness and concentration balance during the games.

Champion attitude, developing as a player and achieve an excellence level is more important for him than the money-materialism.

WHEN TEAM HAS POSSESSION

Amazing talent has natural predisposition and relation with the ball.

Better in central spaces shows good mobility in width with very good and effective off the ball moves, snaking between lines and spaces.

Very important in playmaking he likes to apply his skills – acceleration, dribbling, creativity, passing with vision, versatility, crossing – from

the last half of second third, creating unbalances in last third – providing passing solutions for his mates in 1-2 moves - and make a difference

in finishing moments: assisting – with nice decision taking/criteria/definition timing - or trying himself the goal with his shooting – precise,

He is not effective in the air even sometimes shows a good jumping-range.

While in possession he needs to be more aggressive/incisive in some moments, masking this way his physical fragilities.

Set pieces taker: With nice effectiveness – more with right than left foot - in corners and free-kicks – central and lateral.

WHEN TEAM DOES NOT HAVE POSSESSION

Does some oriented pressing and covering depth but little effective. With intelligence and some anticipation skills at this moment can

recover the possession but needs more intensity when team is down on the score sheet.

Provides solutions for his team mates, looking for open lines or spaces, preferably in short-mid passing with ball on the feet to apply his skills

– first touch, dribbling, vision, passing, decision taking – speeds up the process and create unbalances with intelligence and effectiveness. He

Reacts to loss and has some positioning/covering concerns but he is less effective.

Unusual maturity for a player with his age.

Champion attitude he knows what means the true success.

Effectiveness in the air.

Aggressiveness/Concentration balance during the games.

In one of the best clubs in the world - Ajax FC - to maximize and materialize all the potentialities of his natural talent, the future looks brilliant

for him. He is prepared to the next stage of his career – included in other club with major ambitions.

Eriksen has the attitude and talent/potential to achieve an excellence level in few years if he keeps the focus on it. 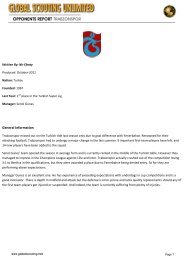 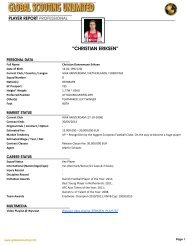 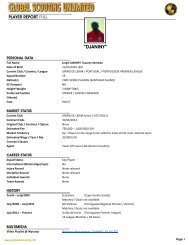 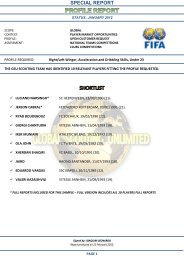 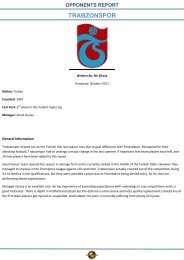 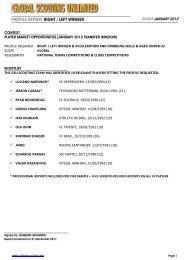 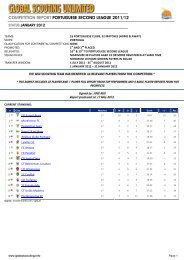 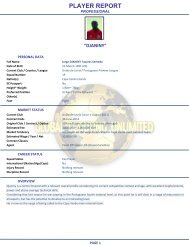 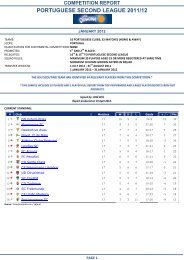 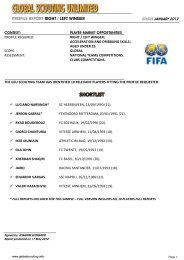 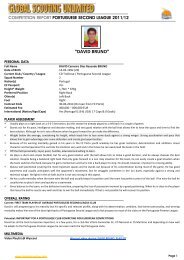