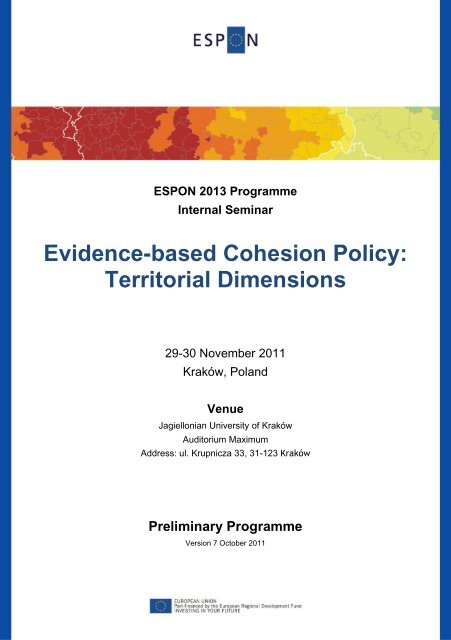 This ESPON Internal Seminar shall contribute to the current policy development by:

territorial dimension in future policy, where ESPON can contribute with territorial fact and evidence:

- Conducting a stimulating discussion on current project results and progress, highlighting the added

value of using the facts and evidence provided for place-based policy making: and

- Increasing the involvement of actors and networking, creating synergetic linkages between the projects,

and finding options to improve processing, dissemination and communication of ESPON results to

The seminar will be held on 29-30 November 2011 in Kraków, Poland, It is organised in cooperation with the

Polish Presidency of the European Union within the framework of the ESPON 2013 Programme.

ESPON, the European Observation Network for Territorial Development and Cohesion, strives to support

policy development with facts and evidence covering the entire European territory, its regions and cities.

Interest at a European level in evidence-based and result-oriented policy delivery is high. This demand is for

an integrated, place-based approach to development and a territorial dimension in policy development. This

The ESPON Internal Seminar 2011 will therefore try to fulfil a double ambition.

On the first day, the internal ESPON seminar will take its starting point from the debate around future

Cohesion Policy and the Territorial Agenda 2020. Key note speeches from the Polish EU Presidency and the

territorial dimension. Following this plenary session, a number of key policy issues and demands will be

On the second day, the internal ESPON seminar aims to stimulate proceedings through a debate of project

results between policy makers in the ESPON Monitoring Committee, Stakeholders behind ESPON Targeted

Analyses, the ESPON Contact Point Network and the partners of ESPON projects. In parallel workshops, a

large number of ESPON projects will present their current progress. The feedback will ensure that policymakers

will get relevant and scientifically robust results from the programme. This will also be an opportunity

to unleash synergies between the themes and projects.

In closing the seminar, the next steps of European policy development related to territorial cohesion as well

as in the implementation of the ESPON 2013 Programme will be tabled. A particular plenary dialogue will be

The seminar is targeting members of the ESPON Monitoring Committee, stakeholders participating in

Targeted Analyses, Lead and Project Partners as well as the ESPON Contact Points. A maximum of 200

participants can be welcomed at the venue.

Polish Presidency in the Council of the European Union, Piotr Żuber (tbc)

and indicators and their policy implications, dr. Philippe Doucet (tbc) and dr. Kai

The ESPON 2013 Programme is part-financed by the European Regional Development Fund, the EU

development of the European territory. ESPON shall support Cohesion Policy development with European

wide, comparable information, evidence, analyses and scenarios on framework conditions for the

development of regions, cities and larger territories. In doing so, it shall facilitate the mobilisation of territorial

capital and development opportunities, contributing to improving European competitiveness, to the widening

and deepening of European territorial cooperation and to a sustainable and balanced development.

Development and Infrastructures, Department for Spatial Planning and Development of Luxembourg.