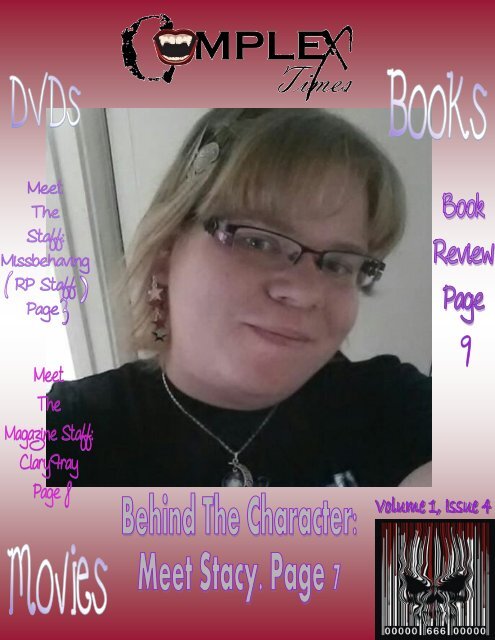 7. Behind The Character: Meet Stacy

The idea of this article is to go

behind the character and talk

about them. We hope it will

help you to get to know them

as a person and a character.

We are calling this, Behind The

(If you want to be in the next

So you want to get to know the girl behind ClaryFray? Well lucky for you She

is in a sharing mood. First things first, her real name is Stacy, and she's been a

member of the LoTGD realms since October 2007. Many have known her

more popularly as AryatheSecond or Arya Drottningu, over the years. There

are many others but that is besides the point. She is a girl of 24 years whom

loves to read, write, swim and just watch some good TV or movies. Something

magazine. She is told she can be very sweet and evil all at once or in a split

second depending on how the people around her interact. I love to roleplay

whether in detail or short posts so hit me up in texts.

With help from Stacy

This is our first interview with one of the Magazine Staff. First up is ClaryFray our Assistant

Avaline: So let us start off with your name.

ClaryFray: You want my game name or my real name Miss?

Avaline: Since you are our first interviewee, I'll let you decide.

ClaryFray: Okay I'll do both then. My character's name is Clarissa Adele Morgenstern,

though my friends and family call me Clary. And my real name is Stacy.

ClaryFray: Okay, well she started her life in The Complex as a Shadowhunter sent on a mission

to stop a vampire who was killing needlessly. But instead of completing her mission she

met and fell in love with her husband Merlin. And from there her life has changed.

Avaline: Awe, her life took a turn for the best I see? Does she have children?

ClaryFray: She does. She has a daughter and a son. Her daughter just married on February

15 th and her son is a little over 2 years old. She has been trying to convince Merlin to let her

have a third as their daughter grew too fast due to her succubus genetics.

Avaline: Ah, well that is lovely! I wish you the best of luck with trying for a third! Now, onto

the real you; what do you do for a living?

ClaryFray: Thanks a little secret is she's actually already expecting twins after her husband

relented to her request. But to answer your question I currently work at a grocery store as

a clerk. I am taking my produce manager course and hope to eventually return to university

to finish my nursing degree.

Avaline: You want to be a nurse? Oh, that’s great! Do you have a spouse or children?

ClaryFray: I do. And no spouse or children. I've been single about 6 months now though I do

plan to one day start a family I am in the phase of it will happen when it is meant to.

Avaline: I understand. I personally have been in that phase three years now. I am wondering,

what keeps you coming back to TC?

ClaryFray: I have always enjoyed being able to be someone I really ain't. Getting to be the

person I wish I was. And because I actually care for the people I chat with, I always return.

I mostly come back because I like chatting with Merlin and Hiskias. And the others I do.

Avaline: I feel the same way; and how do you like being part of the Magazine?

ClaryFray: It's nice to be part of something that allows me to participate with other people

who are also on the site. It also lets me be creative in my writing and designs.

And with that our interview ended as we ran out of time. Watch for the next interview in

Hello again faithful Complex Time readers, this month we are bringing to you a review on the popular book turned

Movie recently, Insurgent. Myself, I was a huge fan of the book and although I loved the movie it did stray a bit off

course. But in the end I would recommend both to you. So in order to do this review in completeness for you I will

give you my opinion of each as a separate entity and then as an adaption of book to movie. Bear with me however

as it's been a while since I read the book.

Roth. Veronica wrote this book back in May of 2012 and it is classified as a young-adult fiction, science fiction,

and/or a romance novel. For fans of Hunger Games this series is a must read, though many may think it is too similar

I found it to be a great story with an almost more intriguing storyline then the aforementioned series.

And this brings me to the description of the book provided by the Goodreads.com website in case you are one of

the many who may not have heard of or read the series:

book in the Divergent trilogy. As the sequel to the 2011 bestseller Divergent, it continues the story of Tris Prior and

the dystopian post-apocalyptic version of Chicago. Following the events of the previous novel, a war now looms as

conflict between the factions and their ideologies grows. While trying to save the people that she loves, Tris faces

The book was first published on May 1, 2012 by the HarperCollins imprints Katherine Tegen Books in the

U.S. and HarperCollins Children's Books in the U.K, a "Collector's Edition" was published on October 30 in the

So my overall rating of this book? I gave it 4.75 stars out of 5. If I had not already ready the Hunger Games before

this series I probably would have given it a full 5 stars. But the fact I felt like I was back in Peeta and Katniss'

world kind of took away from the experience of Tris and Four's.

Now as for the movie as a single entity I gave it a 4.5 out of 5 stars. It kept me entertained throughout but some

parts of the movie just seemed too repetitive of its Prequel Divergent. I loved all the action and conflict between all

the characters including the hero and heroine, and would definitely tell all my friends and family that they needed

to see this movie. And keeping in theme with my book reviews I am going to give you a little snippet into what the

movie is described as thanks to IMDB.com,

threatens to tear her society apart with the help from others on her side.”

Short and sweet right? Now in tying up my review I am going to finish off with how I think the movie compared to

the novel. And for a book lover like me I was amazed at how close they kept the story and though they did change

some of the story they did it both in great and some infuriating ways. For example, I loved how they combined all

the trials that Tris must go through in order to find out what the creators of their factions had for their world. It was

interesting seeing how only a Divergent, and only Tris was able to open the box which was not part of the books.

going to go beyond the wall when in the book only a few select group of people sneak out. But all in all I enjoyed

the adaptation and recommend both reading and watching this great piece of imagination.

But that's it for now, so goodbye for now and see you again next time.