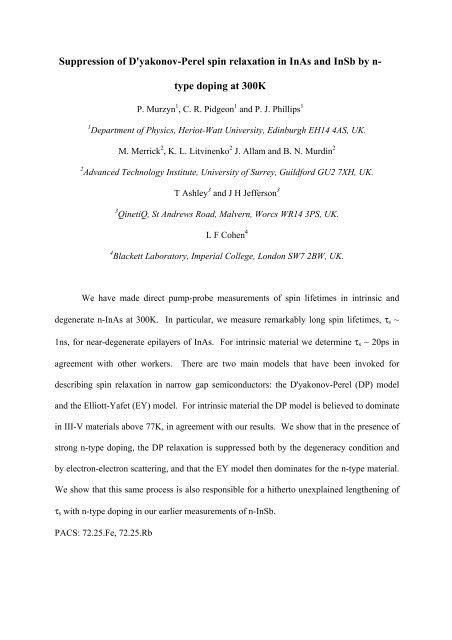 1ns, for near-degenerate epilayers of InAs. For intrinsic material we determine τ s ~ 20ps in

agreement with other workers. There are two main models that have been invoked for

and the Elliott-Yafet (EY) model. For intrinsic material the DP model is believed to dominate

in III-V materials above 77K, in agreement with our results. We show that in the presence of

strong n-type doping, the DP relaxation is suppressed both by the degeneracy condition and

by electron-electron scattering, and that the EY model then dominates for the n-type material.

τ s with n-type doping in our earlier measurements of n-InSb.

electronics, or spintronics, in recent years, and it is important to realise a sufficiently long spin

lifetime, τ s , to process information stored in the form of the polarisation of spin ensembles.

be appropriately confined and/or transferred. In contrast to GaAs-based systems, relatively

little attention has been paid to InAs, even although it may be important in future spintronics

the standard polarization pump-probe method 7,8,14 , which excites spins in the semiconductor

with above-bandgap, circularly polarized light, and probes the induced bleaching with either

the same or the opposite circularly polarized light (SCP or OCP respectively). The pump and

probe beams are pulsed, and by changing the time delay between the pump and probe and

comparing the SCP and OCP results we measure the spin decay lifetime. The optical pulses

for the experiment, carried out at the University of Surrey, were generated with a solid-state

from 2.5 to 11 µm wavelength, with a repetition rate of 250kHz and typical average power of

5mW. The beams were focused on to the sample with spot sizes of approximately 100µm,

and the transmitted probe light was detected with a liquid nitrogen cooled InSb photodiode.

sample IC313 in Fig. 1 for SCP and OCP configurations. The data are characterised by three

features and are in extremely good agreement with the results of other workers 7 . In both

cases there is a transient increase in transmission that is initiated and decays in less than 2ps.

We attribute this to thermalisation of the optically injected carriers, hole spin relaxation and

coherent artifacts of the system 7 . The second feature is a clear distinction between the SCP

relaxation. Finally, there is a long decay of both SCP and OCP that occurs on a longer,

nanosecond scale. Following ref 7, we plot the fractional difference in transmission between

with a monoexponential decay, yields a time constant of τ = 20ps. The error in the fitting due

to noise in the data is estimated to be ±10 ps.

to conduction band transitions from a complex (spin-orbit mixed) valence band, a partially

spin-polarised distribution is created by pumping with circularly polarised radiation. If we

take the case of (e.g.) a left circularly polarised pump pulse (σ-), the relative concentration of

transmission is proportional to the absorption change, ∆α. A σ - probe will experience ∆α - ∝

value 0.25. In practice our polarisers were not fully optimised for these long wavelengths, so

the maximum polarisation we achieve is somewhat less than 25%.

near degenerate sample, IC311, and the results are shown in Fig. 2. Although the change in

polarization P opt from SCP to OCP is quite large, the decay times of each are similar to each

other and also to the electron-hole recombination rate. We therefore show in this figure the

SCP and OCP data normalized to the peak so that the difference in slope is more apparent.

Clearly the decay of the spin polarisation is substantially lengthened, and the decay time of

(DP) 2,5,6 and the Bir-Aronov-Pikus (BAP) 3 mechanisms. The BAP mechanism is thought to

exchange interaction. By contrast with the other two processes, it depends directly on the

concentration of holes, and is not thought to be important in n-type NGS.

eigenstates because of the strong spin-orbit coupling induced by the lattice ions. In the

NGS the conduction electron states, in turn, are strongly mixed with the valence states

through the k.p interaction across a narrow energy gap. In this case spin-independent

interactions with impurities, boundaries, phonons etc., can connect spin up and down

electrons, leading to spin flip transitions whose rate 1/τ s is proportional to 1/τ p where τ p is the

orbital momentum (mobility) scattering time. This process has been shown to be important at

intrinsic or lightly n-type NGS 6,7 , where the lack of inversion symmetry in the presence of a

field 2 . Somewhat counter-intuitively, and in contrast with EY, the spin relaxation rate 1/τ s is

subject to motional narrowing, and is therefore directly proportional to the orbital (mobility)

scattering time, τ p . In NGS both the EY and the DP mechanisms may be important, as shown

the former being interpreted in terms of EY and the latter of DP. Typically spin lifetimes in

temperatures, whereas a spin lifetime of 20ps was reported for lightly n-type InAs at 300K.

The DP relaxation rate for lattice scattering and non-degenerate statistics:

For the case of degenerate statistics the DP expression becomes:

this will be dominated by electrons, as the fourfold degeneracy of the valence band at k = 0

for the degenerate case. The reason for lengthening was not explained in detail, but we

process dominating as with the HgCdTe.

InAs and InSb [theoretical/experimental values for τ DP are obtained as follows: IC313

and τ EY ~ 350ps respectively, so that clearly it is not important for this case.

regard to the DP process. In the first instance it is obvious from the pre-factor in equation (4)

that the onset of degeneracy considerably suppresses the DP process. Thus, for the more

However, in addition to this it has been convincingly demonstrated recently 9 that for the DP

another electron (i.e. electron-electron scattering) via the Coulomb interaction as by scattering

from thermal vibrations or defects, and yet this process can affect the mobility only weakly.

kT/E F ~ 1.0 (approximately our case for the InAs, IC311) the actual time between momentum

lengthening the value of τ DP obtained by a further factor of 10. Thus, for both these reasons

process, and in fact this gives reasonable agreement with our measured values of τ given the

In summary, we have measured remarkably long spin lifetimes (~ 1.6 ns) in neardegenerate

n-InAs at 300K. This, together with our earlier results for degenerate n-InSb (τ ~

300 ps) 8 , is explained in terms of the suppression of the DP spin relaxation process by the

degeneracy condition and by electron-electron scattering. We here present new results for

both intrinsic and near-degenerate InAs at 300K, and show that both the InAs results and the

degeneracy condition and by electron-electron scattering 9,10 , in the presence of strong n-type

doping. The EY process then dominates for the n-type material. The long spin lifetimes are

clearly important from the point of view of devices of the spin transistor type 11,12,13 .

Onderzoek der Materie (FOM), as part of the UK programme at FELIX. We are also grateful

1. Pump-probe transmission change as a function of probe delay time for pump and probe

having the same circular polarisation (SCP), and the opposite (OCP), for lightly doped n-

SCP and OCP signals divided by their sum. The solid curve is a fit of a monoexponential,

slope. The inset shows the difference in the un-normalized data, and the decay time of the 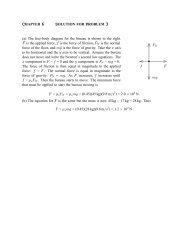 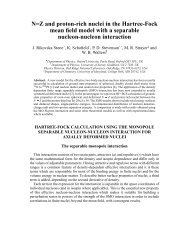 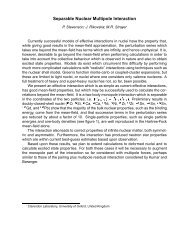 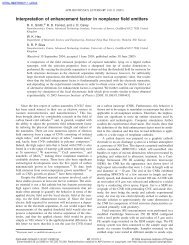 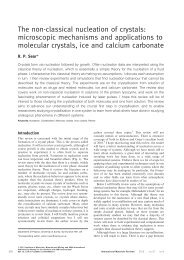 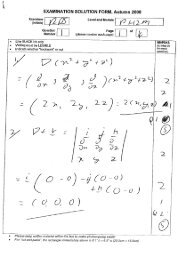 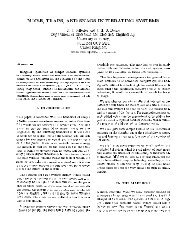 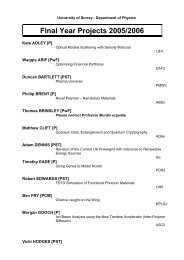 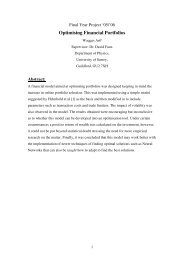 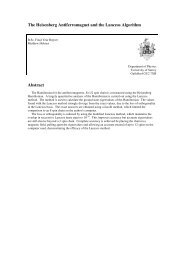 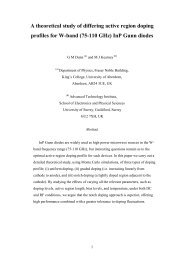 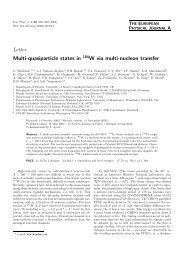 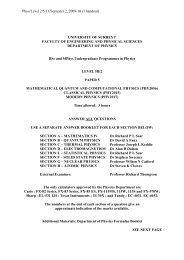 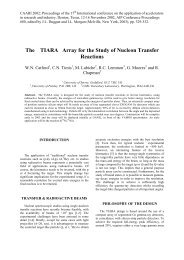 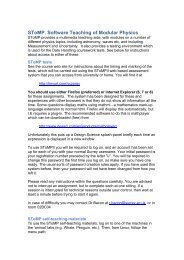 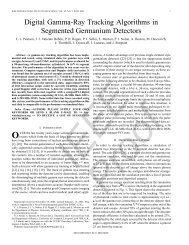 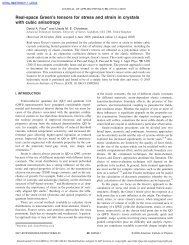 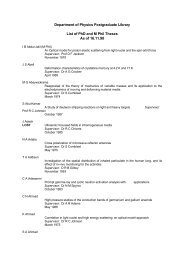 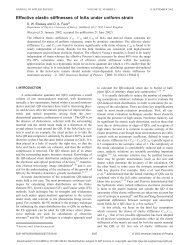 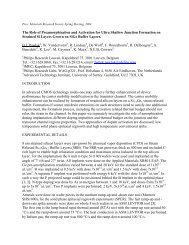 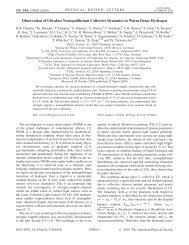 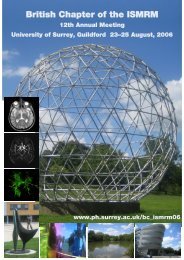 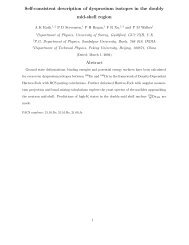 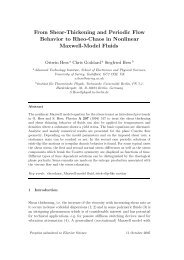 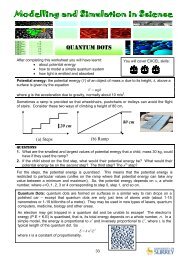 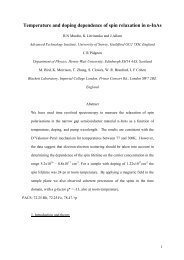 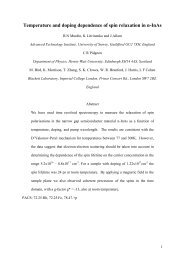 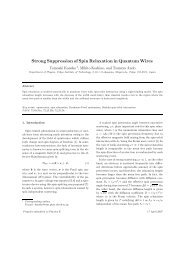 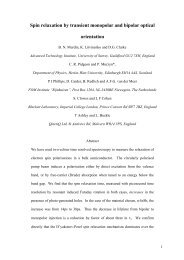 Magazine: Suppression of D'yakonov-Perel spin relaxation in InAs and InSb by n