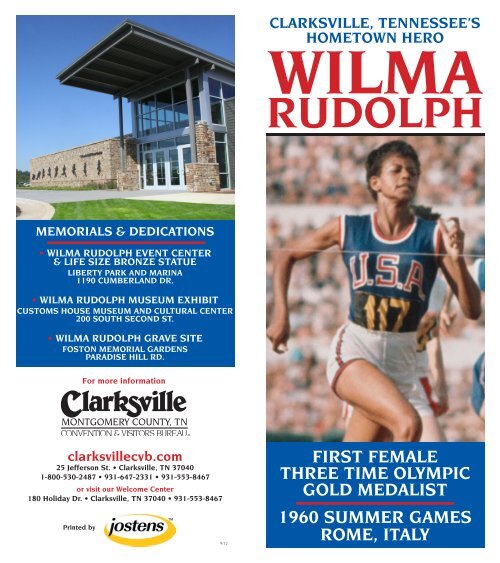 or visit our Welcome Center

It is through adversity and struggle that some of the most

courageous individuals are born. Through determination,

perseverance and a will to succeed legends are created.

gold medals in the 1960 Olympic Games. The first American

woman to achieve such a feat, Rudolph proved to the world

that nothing could keep her

illness for most of her child

fever all before the age of six.

She was confined to a leg brace

which left her disabled. Doctors

told her family she would

never walk, and certainly never run, normally during her life.

Through extensive physical therapy and determination, she

overcame her disability to become one of the most notable

and celebrated Olympic runners of all time.

As Rudolph once said, “My doctors told me I would never

walk again. My mother told me I would. I believed my

mother.” This attitude is what helped Rudolph overcome the

health issues that plagued her childhood and allowed her to

become involved in athletics as a teen. She played basketball

for the Burt High School team. Later, she was recruited to

run track for the school as well. While still in high school, she

qualified for the 1956 Olympic Games in Australia. There she

won a bronze medal, a foreshadowing of the great success

that was yet to come.

Once home in Tennessee, Rudolph graduated from high

school and enrolled in the historically black Tennessee State

University on a full scholarship and pursued her degree in

education. All the while, she continued to train competitively

in Track & Field as a TSU Tigerbelle, always aspiring for

her next shot at Olympic

Wilma as a student at Burt High

While in Italy, Rudolph

sports superstar and an

athlete. She returned to the

Several other honors were

bestowed upon her, including

Athlete of the Year.

With all of the fame and

a hometown that still held

some of the old wounds of

segregation and racism. At

events, the first in the city’s

Rudolph retired from her Olympic career and found success

in teaching, coaching and public speaking. In the 1980’s she

was inducted into the U.S. Olympic Hall of Fame. Rudolph

succumbed to brain cancer in 1994, but not before she

created the Wilma Rudolph Foundation, which supports the

In honor of one of America’s most outstanding Olympic

athletes and her legacy, Clarksville has paid homage to the

hometown hero in several ways. In 1993, US State Highway

ESPN has since produced an hour documentary for the

of the century. The program

marker which sits at the

Today, an Event Center is

named in her honor at Liberty Park and

Marina in Clarksville. There, a bronze

statue of Wilma Rudolph sits outside the

building. It was hand-crafted in her likeness

is also part of a permanent exhibit at the

line at the 1960 Olympic Games

Wilma waves at the 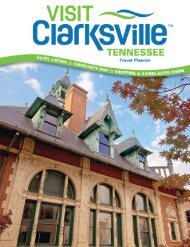 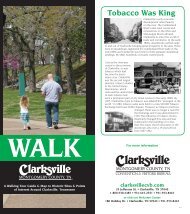 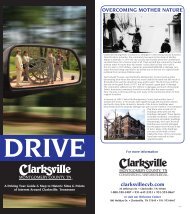