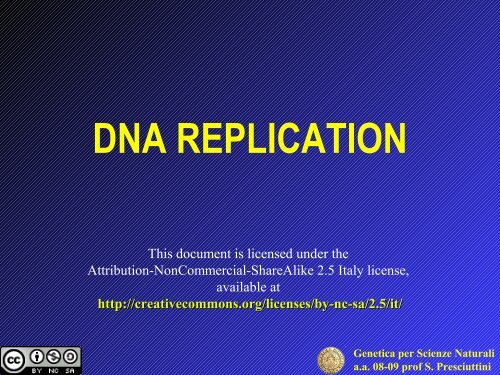 In both prokaryotes and eukaryotes, DNA replication

occurs as a prelude to cell division. This DNA replication

phase is called the S (synthesis) phase. . The two daughter

become chromosomes in their own right in the daughter

As with all phenomena that involve nucleic acids, the

complementarity of DNA molecules and on the ability of

proteins to form specific interactions with DNA of specific

2. The model of Watson and Crick

The model of DNA replication proposed by Watson and

Crick is based on the hydrogen-bonded specificity of the

base pairs. Complementary strands are shown in different

colors. The fact that new strands can grow only in the

5’-to-3’ direction adds complexities to the detailed

If this model is correct, then each daughter molecule

should contain one parental nucleotide chain and one

been tested in both prokaryotes and eukaryotes. A little

thought shows that there are at least three different ways

in which a parental DNA molecule might be related to the

each daughter duplex contains one

parental and one newly synthesized

strand. However, in conservative

strands, and the parent duplex is

results in daughter duplexes that

consist of strands containing only

segments of parental DNA and

In 1958, Matthew Meselson and Franklin Stahl set out to distinguish among the

three models. . They grew E. coli cells in a medium containing the heavy isotope of

nitrogen 15 N rather than the normal light ( 14 N) form. This isotope was inserted into

the nitrogen bases, which then were incorporated into newly synthesized DNA

After many cell divisions in 15 N, the

DNA of the cells were well labeled

with the heavy isotope. The cells were

then removed from the 15 N medium

and put into a 14 N medium; after one

and two cell divisions, , samples were

taken. DNA was extracted from the

cells in each of these samples and put

into a solution of cesium chloride

(CsCl) in an ultracentrifuge.

in a cesium chloride (CsCl) gradient

If cesium chloride is spun in a centrifuge at tremendously high speeds (50,000 rpm)

for many hours, the cesium and chloride ions tend to be pushed by centrifugal force

toward the bottom of the tube. Ultimately, a gradient of Cs+ and Cl ions is

established in the tube, with the highest ion concentration at the bottom.

force. But, as they travel down the tube, they encounter the increasing salt

concentration, which tends to push them back up owing to the buoyancy of DNA

(its tendency to float). Thus, the DNA finally "settles" at some point in the tube

GC to AT base pairs). The presence of the heavier isotope of nitrogen changes the

buoyant density of DNA. The DNA extracted from cells grown for several

6. The proof of the semiconservative model

Meselson and Stahl found that, one generation

after the heavy cells were moved to 14 N

medium, the DNA formed a single band of an

intermediate density between the densities of the

in 14 N medium, the DNA formed two bands: one

at the intermediate position, the other at the light

This result would be expected from the

semiconservative mode of replication; in fact,

the result is compatible with only this mode if

the experiment begins with chromosomes

With the use of a more modern staining technique, it is now possible to visualize the

semiconservative replication of chromosomes at mitosis. In this procedure, the

chromosomes go through two rounds of replication in the presence of

bromodeoxyuridine (BUdR), which replaces thymidine in the newly synthesized

DNA. The chromosomes are then stained with Giemsa stain, producing the

If cells dividing in culture are treated with

BrdU during S phase, the cells are fooled

into incorporating it — instead of

thymidine — into their DNA.

One of the properties of the resulting

DNA is that it fails to take up stain in a

When cells are allowed to duplicate their

chromosomes once in BrdU, the

chromosome that appear at the next

However, when the cells duplicate their

chromosomes a second time in BrdU, one

of the sister chromatids that appears at

the next metaphase stains normally, while

its sister chromatid does not.

identified and purified the first

that catalyzes the replication

This reaction works only with

the triphosphate forms of the

We now know that there are three DNA polymerases in E. coli. The

first enzyme that Kornberg purified is called DNA polymerase I or

pol I. This enzyme has three activities, which appear to be located in

different parts of the molecule:

1. a polymerase activity, which catalyzes chain growth in the 5’→ 5 3’ direction;

2. a 3’→ 3 5’ exonuclease activity, which removes mismatched bases; and

with pol I, has a role in the replication of E. coli DNA

The complete complex, or holoenzyme, of pol III contains at least 20 different

polypeptide subunits, , although the catalytic "core" consists of only three subunits.

at least a short segment of duplex already present.

E. coli replication begins from a fixed origin, termed oriC, but then proceeds

bidirectionally (with moving forks at both ends of the replicating piece). It is 245 bp

long and has several components. First, there is a side-by-side, or tandem, set of 13-

bp sequences, which are nearly identical. . There is also a set of binding sites for a

protein, the DnaA protein. . An initial step in DNA synthesis is the unwinding of the

DNA at the origin in response to binding of the DnaA protein.

The DNA has been labeled with 3H-deoxythymidine, and

the radioactivity has been detected by overlaying the

replicating chromosome with photographic emulsion. The

autoradiograph shows that the E. coli chromosome has

Although there seem to be

actually the point where the

strands of DNA are laying

Bacteria such as E. coli usually require a 40-minute

replication-division cycle, but, in eukaryotes, the cycle can

vary from 1.4 hours in yeast to 24 hours in cultured animal

Eukaryotes have to solve the problem of coordinating the

replication of more than one chromosome, as well as

replicating the complex structure of the chromosome itself.

In eukaryotes, replication proceeds from multiple points of

Experiments in yeast indicate the existence of about 400

replication origins distributed among the 17 chromosomes,

and in humans there are estimated to be more than 10,000

15. Replication bubbles in the fruit fly

replicating DNA in the

embryo of the fruit fly

At least 20 different bubbles, therefore with at least 40 different replication forks, can

be observed in this electron micrograph (and accompanying drawn representation of

the electron micrograph.) The large number of replication origins in eukaryotic

chromosomes vs. E. coli's one, enables the slower replication apparatus to copy the

bubbles; the diameters of

DNA chain in both arms

of these bubbles indicate

that they are double-

DNA polymerases can extend a chain but cannot

be initiated with a primer, , or short oligonucleotide,

that generates a segment of duplex DNA.

RNA primers are synthesized either by RNA

polymerase or by an enzyme termed primase.

long) stretch of RNA complementary to a specific

region of the chromosome.

The RNA chain is then extended with DNA by

with the template DNA, and additional proteins, such

complex is termed a primosome.

the 5’→ 3’ direction and therefore, because of the

antiparallel nature of the DNA molecule, move in a

consequence of this polarity is that while one new

strand, the leading strand, is synthesized

continuously, the other, the lagging strand, must be

synthesized in short, discontinuous segments. The

addition of nucleotides along the template for the

lagging strand must proceed toward the template's

5’ end (because replication always moves along the

must grow in a direction opposite that of the

movement of the replication fork.

As fork movement exposes a new section of lagging-strand template, a new lagging-

In E. coli, pol III carries out most of the DNA synthesis on both strands, and pol I fills

in the gaps left in the lagging strand, which are then sealed by the enzyme DNA ligase.

and an adjacent 3’ 3 OH group. It is the only enzyme that can seal DNA chains.

a) The primers for the

discontinuous synthesis on the

b) The primers are extended by

fragments that were first

detected by Reiji Okazaki and

activity of pol I removes the

primers and fills in the gaps

d) which are sealed by DNA

21. A comprehensive view of the replication fork

strands together in a double helix. Among E. coli helicases are the DnaB protein

the polymerase. The unwound DNA is stabilized by the single-stranded binding

(SSB) protein, which binds to the single-stranded DNA and retards reformation of

DNA that need to be removed to allow replication to continue. Circular DNA can be

twisted and coiled, , much like the extra coils that can be introduced into a rubber

This supercoiling can be created or relaxed by enzymes termed topoisomerases.

There are two basic types of isomerases. Type I enzymes induce a single-stranded

break into the DNA duplex. Type II enzymes cause a break in both strands. . In E.

coli, , topo I and topo III are examples of type I enzymes, whereas gyrase is an

example of a type II enzyme.

23. The action of topoisomerases

Untwisting of the DNA strands to open the replication fork causes

extra twisting at other regions, and the supercoiling releases the strain

of the extra twisting. During replication, gyrase is needed to remove

positive supercoils ahead of the replication fork

(positively supercoiled) regions accumulate ahead of the fork as the

parental strands separate for replication. A topoisomerase is required

to remove these regions, acting as a swivel to allow extensive 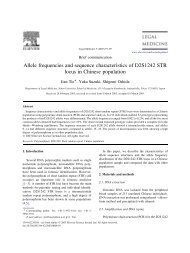 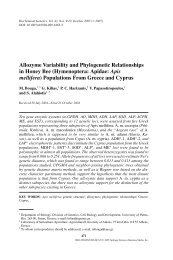 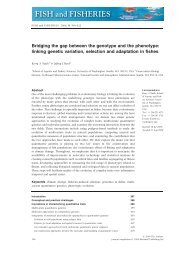 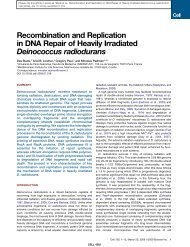