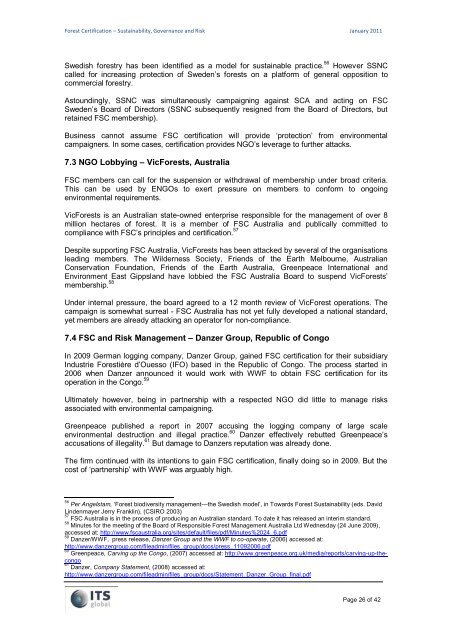 Swedish forestry has been identified as a model for sustainable practice. 56 However SSNC

Astoundingly, SSNC was simultaneously campaigning against SCA and acting on FSC

FSC members can call for the suspension or withdrawal of membership under broad criteria.

million hectares of forest. It is a member of FSC Australia and publically committed to

compliance with FSC‘s principles and certification. 57

Despite supporting FSC Australia, VicForests has been attacked by several of the organisations

Conservation Foundation, Friends of the Earth Australia, Greenpeace International and

Under internal pressure, the board agreed to a 12 month review of VicForest operations. The

campaign is somewhat surreal - FSC Australia has not yet fully developed a national standard,

yet members are already attacking an operator for non-compliance.

Industrie Forestière d‘Ouesso (IFO) based in the Republic of Congo. The process started in

operation in the Congo. 59

Ultimately however, being in partnership with a respected NGO did little to manage risks

accusations of illegality. 61 But damage to Danzers reputation was already done.

The firm continued with its intentions to gain FSC certification, finally doing so in 2009. But the

cost of ‗partnership‘ with WWF was arguably high.

FSC Australia is in the process of producing an Australian standard. To date it has released an interim standard.

Minutes for the meeting of the Board of Responsible Forest Management Australia Ltd Wednesday (24 June 2009),

Danzer/WWF, press release, Danzer Group and the WWF to co-operate, (2006) accessed at:

Greenpeace, Carving up the Congo, (2007) accessed at: http://www.greenpeace.org.uk/media/reports/carving-up-thecongo