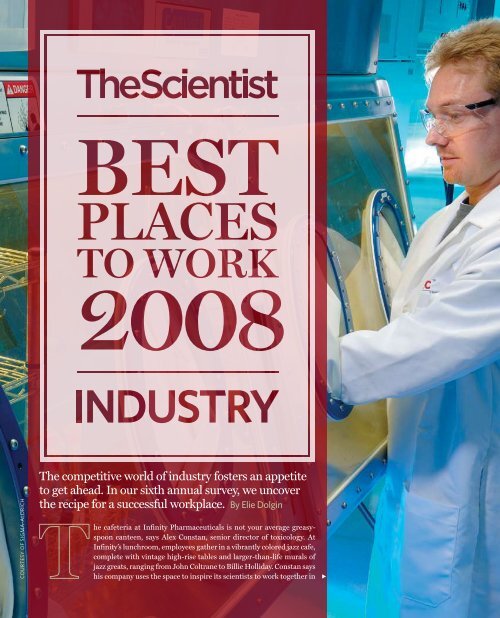 The competitive world of industry fosters an appetite to ... - Elie Dolgin

The competitive world of industry fosters an appetite to ... - Elie Dolgin

The competitive world of industry fosters an appetite

to get ahead. In our sixth annual survey, we uncover

the recipe for a successful workplace. By Elie Dolgin

he cafeteria at Infinity Pharmaceuticals is not your average greasyspoon

the collaborative, improvisational way of

play music together is kind of like how our

teams work together when developing a

compound,” he says. The employees appear

to be inspired: The company was highest

ranked for its research environment

and placed fifth overall in

to Work in Industry survey.

which garnered an overwhelming

of going the extra distance for

at Vertex Pharmaceuticals or Friday “fermentation

every Friday. “It’s the extra little step that

their job. They have

A scientist at the Samuel Roberts Noble Foundation working

on the legume genomics project.

For the fifth consecutive year, personal

satisfaction ranked as the most important

ingredient of the workplace. For

many scientists, satisfaction comes from

having the time and resources to pursue

which placed 18th in this year’s survey,

says she is encouraged to spend about

working with an assay she believes could

a great deal of respect and given a lot of

Tissue Based Services 100 or fewer Integrity

flexibility and autonomy,” she says. “It

allows me to go a bit deeper and look into

something just because it’s interesting.”

For Linda Gritz, the principal medical

really drew her to Vertex. She

for emphasizing science in all

aspects of the business, including

communications. “If it’s not

count,” she says. After working

as a bench researcher for years,

because she wanted to move farther

down the pipeline, and see one of the

products she worked on reach the shelf.

When she started applying for writing

jobs, most companies turned her away

because they wanted trained journalists

or public-relations officers, not scientists.

At Vertex, however, more than half of the

are scientists with PhDs; Gritz says this is

crucial for communicating the company’s

Many scientists appreciate the intimate

nature of small companies, as

reflected in the 10 highest ranking companies

this year, all of which have fewer

This sentiment is especially true of the

again placed at the top of our survey for

of operations Vernon Smith, whose

ago in his garage, says that a rigorous,

everyone fits into the company’s unique

business culture. “When we hire, we’re

looking not just at someone’s knowledge

base, but at [his or her] soft skills

Everyone knows and trusts one

another, Smith says, and anyone can walk

down the hall between Tec’s two research

laboratories to ask a colleague’s advice,

all of which helps the scientific process.

As an added benefit, all of the company’s

profits, and all major business decisions

Organon ranked seventh among large companies in this year’s Best

Places to Work in Industry survey – its first year on our charts. Despite being acquired last fall

by fifth-ranking Schering-Plough, employees say Organon has so far retained its identity and

commitment to high-quality research. Most are optimistic about the change.

to Schering-Plough’s team of some 4,400. In addition, Organon’s line of more than two dozen

products will be a strong complement to Schering-Plough’s $12 billion in revenue, according to

Anja Garritsen, head of target discovery in Organon’s office in Oss, the Netherlands.

long history of partnerships. One of the company’s strongest initiatives has been to create

collaborations with academic teams in both Europe and the United States. In fact, Organon

biotech research community in the city. Already, the Boston office has started a collaboration

Schering-Plough will affect jobs and the work climate, it’s too early to say how things may

change, says Garritsen. On the whole “I think the feeling here is extremely positive, because

Schering-Plough has a similar work culture to ourselves and is very research oriented,” says

Mark Craighead, a project leader at the Newhouse, Scotland, location. “I think it’s a good fit.”

family-oriented events and flexible hours to balance work and home life. At the Newhouse

location, the Christmas parties for employees’ children are very popular; for two hours on

a Sunday near the holiday, Santa visits and hands out gifts to each child. “My son really

Organon headquarters in Oss, the Netherlands

reproduced with permission of nv Organon / all rights reserved

Significant Developments in the Past Year

Significant Developments in the Past Year

are made at monthly “bagel meetings”

(which don’t actually include bagels).

“People have to know more than just

their job,” says Smith. “They have to

understand how the company works.”

A researcher at Lexicon Pharmaceuticals

Benefits of Being Big

Hi-Bred, came out atop this year’s

director Geoff Graham, is its

Graham joined the company in 2000 as

a plant biologist, he was teamed up with

a physicist. Together, they worked on

improving a corn variety. “We came up

with a much better solution than if I’d

just been dealing with a bunch of plant

breeders,” he says. (Picking a couple of

ears of fresh, sweet corn after work is an

According to our survey’s respondents,

large companies are also on the vanguard

of socially-progressive policies that help

among companies with more than 5,000

employees, “gender equality is very much

As a young, married woman, she describes

herself as in the “danger zone” for some

employers, yet she was recently promoted.

Employees at Amgen can work part-time

after having children; for example, regulatory

think it’s a win-win situation for both” the

company and me, says Steinmann. Klett

adds, “I just know, in this company I do

not have to take the choice – career or

Suzanne Coberly, a pathology director at

Amgen, where more than 300 employees

took part in our survey, says she likes

working for a larger company because

it lets her stay diverse. Currently, she

has three oncology and four metabolic

projects, with one or two neurology

Thirty miles north of Houston, texas – and a world away from the biopharmaceutical

industry’s hubs in California and New Jersey – sits The Woodlands, a sylvan

community and home to the headquarters of Lexicon Pharmaceuticals.

The company was founded in 1995 as Lexicon Genetics, and until last year focused

almost exclusively on creating knockout models by the thousands for drug target discovery.

This past year, Lexicon shifted gears, moving into the commercial development of drugs.

by layoffs of 120 people out of a workforce of about 700 people. Despite the change, Lexicon

Work in Industry overall list, up from 26th place the previous year.

“We all agree that we have a common goal,” says Lexicon’s associate director of oncology,

Rick Finch. “We’re very excited about sharing our discoveries as soon as possible to

get others excited about them.”

When rumors about the impending layoffs circulated, Lexicon employees braced for

the bad news. “I dusted off my resume and made sure everything was up to date,” admits

Robert Read, a veterinary pathologist at Lexicon who managed to avoid a pink slip. “It was

not the happiest time around here, but everybody still believed in what we were doing,”

While the company changed focus, it managed to retain some aspects that made it

successful. “Having such an extensive library of phenotypic information at Lexicon, I’m able

to do research in my field that I wouldn’t be able to do anywhere else,” says Andy Whitlock,

an ophthalmologist at the company.

With its staff slimmed, Lexicon sought a fresh infusion of funds to bankroll its transition

into clinical trials and drug development. Help came in the form of $250 million from the

investment firm Invus, which also arranged a further investment of $345 million over the

Having weathered the changes of 2007, Lexicon is now moving forward with four drug

candidates: One oral treatment for cognitive disorders is in Phase II trials, while three other

drugs – for irritable bowel syndrome, rheumatoid arthritis, and carcinoid syndrome – are in

Phase I trials. The breadth of the research conducted at Lexicon, and the sharing of ample

Read agrees. “I think the world of this company,” he says. “It’s just a really exciting

“I just know, in this company I do not

have to take the choice – career or family;

criteria in 11 different areas. They also indicated which factors were important to them. We ranked 82 US

institutions and 17 non-US with 5 or more responses.

To calculate an institution’s overall ranking, we first weighted each factor based on the average

importance score. Because several factors that ranked as important in the United States are valued less

elsewhere and vice versa, we used different factor weightings to rank the two groups of institutions. The

according to their regional importance. Detailed information on the survey methodology is available on

The Scientist Web site at www.the-scientist.com. Our sample of scientists was self-selected, and we have

made no attempt to standardize the results or to conduct detailed statistical analysis.

The survey was developed and responses were analyzed by AMG Science Publishing (www.

projects waiting for her attention. With

so much going on, she’s more likely to

get the satisfaction of seeing one make it

to clinical trials, she notes. The past year,

however, has seen some trying times at

The workplace was tense, says Coberly,

but the company did a good job of

helping employees through the process

by keeping them informed. “They worked

really hard to talk to people and address

their concerns,” she says.

Amgen wasn’t the only company to

shifted its focus from a consultancy

company to pharmaceuticals, a

number of jobs were also lost. “Those were

tough times, but we were never abandoned

by the leadership,” says Anne Burkhardt,

a scientific fellow and oncology researcher

at Millennium, which was ranked fourth

overall. According to chief scientific officer

decisions to the employees who were

laid off, and it provided good severance

packages. “There was an understanding

that the employees who had to be restructured

were the ones that helped build the

Joe Bolen in our March issue.)

At the end of the day, communication

Cowlen is director of toxicology, most

project decisions are made by consensus

among all members of the project

team. “Not everyone always agrees, but

seen some difficulties in his eight years

at Inspire, but he appreciates that his

opinions are always listened to and recognized.

“It was my dream job the day I

for more information on this

previous years, and a slideshow of

some of this year’s winners.

courtesy of Sigma-Aldrich The competitive world of industry fosters an appetite to get ahead. In our sixth annual survey, we uncover the recipe for a successful workplace. By Elie Dolgin he cafeteria at Infinity Pharmaceuticals is not your average greasyspoon canteen, says Alex Constan, senior director of toxicology. At Infinity’s lunchroom, employees gather in a vibrantly colored jazz cafe, complete with vintage high-rise tables and larger-than-life murals of jazz greats, ranging from John Coltrane to Billie Holliday. Constan says his company uses the space to inspire its scientists to work together in Ω June 2008 The Scientist 49 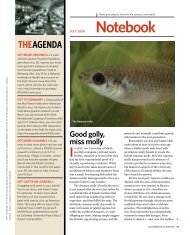 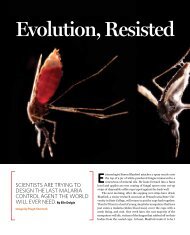 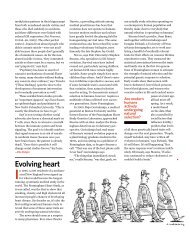 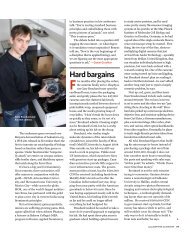 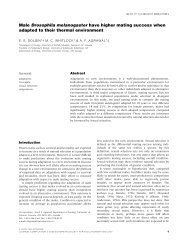 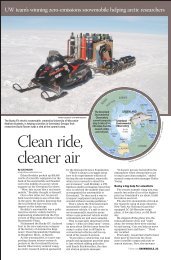 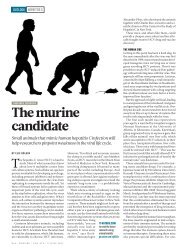 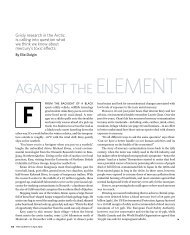 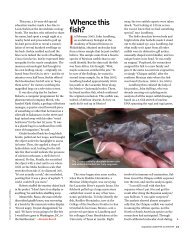 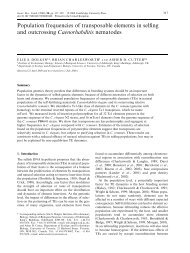 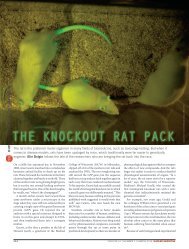 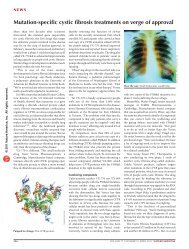 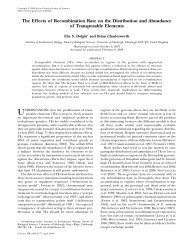 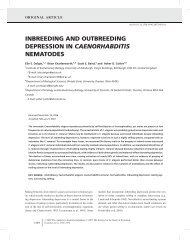 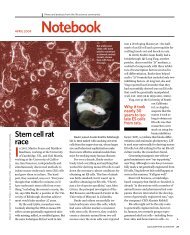 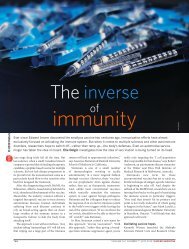 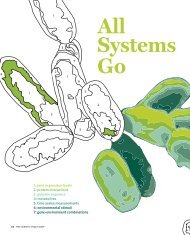 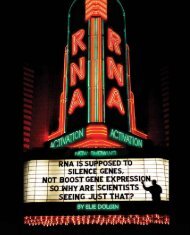 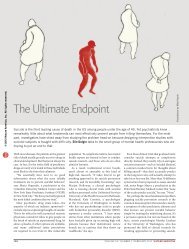 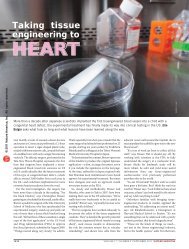 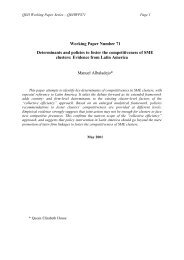 Magazine: The competitive world of industry fosters an appetite to ... - Elie Dolgin