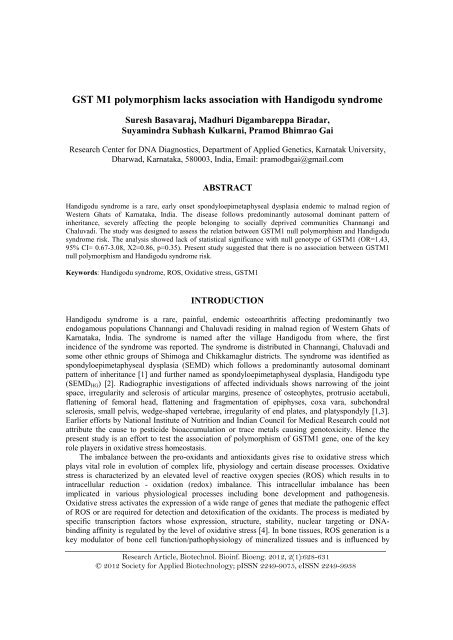 Chaluvadi. The study was designed to assess the relation between GSTM1 null polymorphism and Handigodu

syndrome risk. The analysis showed lack of statistical significance with null genotype of GSTM1 (OR=1.43,

Karnataka, India. The syndrome is named after the village Handigodu from where, the first

incidence of the syndrome was reported. The syndrome is distributed in Channangi, Chaluvadi and

some other ethnic groups of Shimoga and Chikkamaglur districts. The syndrome was identified as

attribute the cause to pesticide bioaccumulation or trace metals causing genotoxicity. Hence the

present study is an effort to test the association of polymorphism of GSTM1 gene, one of the key

implicated in various physiological processes including bone development and pathogenesis.

of ROS or are required for detection and detoxification of the oxidants. The process is mediated by

affinity is regulated by the level of oxidative stress [4]. In bone tissues, ROS generation is a

osteoclastogenesis. ROS-induced bone resorption occurs directly or indirectly through the

modulation of kinases and transcription factor activities in both osteoclasts and osteoblasts [5].

permanent alteration of biological macromolecular structures but also their functions [6].

the detoxification step of Phase II metabolism, usually by catalyzing the conjugation of reduced

glutathione into hydrophobic and electrophilic compounds along with other Phase II enzymes. The

cellular DNA against ROS-induced damage [7]. A common deletion of GSTM1 gene results in a

non-functional genotype, loss of enzyme activity and altered activity of the GST isoforms.

Polymorphisms in GST genes have been associated with susceptibility to a range of diseases,

including rheumatic diseases. GST polymorphisms alone and in concert with environmental

exposures are associated with disease outcome and behaviour of several enzymes [8-10]. The GST

M1 gene is located on chromosome 1p13, a region showing frequent loss of heterozygosity in

human bone diseases including arthritis. Approximately half of all individuals from different ethnic

deficiency are due to the homozygous deletion of GST M1 gene. The GST M1 null allele [GST M1

drawing syringe with help of trained medical practitioner. Before drawing the blood,

explaining the purpose of the study to the participants. All samples were transported to laboratory

according to standard protocol and stored at -80°C till further processing. The study has clearance

from a local human ethical committee.

manufacturer’s instruction. DNA amount present in the isolates was quantified using nanodrop. All

samples were diluted in to 100 ng/μl aliquots, stored at -80°C until further use.

specific primers using β-globin gene as an internal control. The reaction mixture was of 20 μl final

buffer and 1 unit Taq DNA polymerase (NEB). All PCR conditions were followed as prescribed by

manufacturer’s of Taq DNA polymerase. The annealing temperature was standardized as 58°C for

multiplexing; PCR was carried out for 35 cycles. The PCR products were separated on 1.5% agarose

gel. To improve the genotyping quality and substantiation, 30% of samples were tested in triplicates

and results were found to be reproducible with no discrepancy recorded in genotyping.

individuals 23 and 30% respectively. We observed lack of statistical significance with null genotype

increased level of ROS that induces the intracellular redox imbalance. Apart from involvement in

have emerged as major pathophysiological key player. Recent studies have demonstrated that ROS

pathophysiology of mineralized tissues of bone [5]. The vital role of oxidative stress in bone

under certain conditions. Further redox imbalance in bone cells represents a useful approach in the

many inflammatory diseases. These are polymorphic in nature and have population/ethnicdependent

polymorphism frequencies. The GSTM1 gene is located on chromosome 1p13.3. About

20 to 50% of individuals do not express the enzyme due to a homozygous gene deletion, known as

the GSTM1*0, or null allele [13]. The percentage of individuals who do not express the enzyme is

higher in Caucasians and Asians compared to Africans [14,15]. GSTM1 is involved in the

detoxification of polycyclic aromatic hydrocarbons and other mutagens, and cells from GSTM1 null

individuals are more susceptible to DNA damage caused by these agents [16,17].

occurring at varying but significant frequencies in different ethnic groups. In the present study, no

risk. The frequencies of GSTM1 null genotype was similar that reported for Asian population [18].

Acknowledgements: Authors are thankful to the Department of Medical and Higher Education,

Government of Karnataka for providing financial assistance to undertake this work.