fig Q0117computer system/ network server infrastructure/ major financial institution / usa__If you had a serious cyber criminal who was willing to rent his servicesto Al Qaeda, they could do a lot of damage. That’s the kind of thing weneed to worry about…Cyber security is now one of the top five nationalThink about how conflict has changed over history. It took weeks andmonths for an army to move overland. Airplanes reduced that to hours.Then ballistic missiles meant you could go from one continent to anotherin thirty minutes. Now, in cyber space, one continent to another is thirtymilliseconds…With the right set of players you could create chaos in avery short period of time.security challenges facing the United States./ James a. Lewis/ director & Senior Fellow / Center for Strategic & International Studies/ Mike McConnell/ Former Director of National Intelligence/ former director of the national security agency

We meet today at a transformational moment – a momentin history when our interconnected world presents us,at once, with great promise but also great peril.Now, over the past four months my administration hastaken decisive steps to seize the promise and confrontthese perils. We’re working to recover from a globalrecession while laying a new foundation for lastingprosperity. We’re strengthening our armed forces as theyfight two wars, at the same time we’re renewing Americanleadership to confront unconventional challenges, fromnuclear proliferation to terrorism, from climate changeto pandemic disease. And we’re bringing to government –and to this White House – unprecedented transparency andaccountability and new ways for Americans to participatein their democracy.But none of this progress would be possible, and noneof these 21st century challenges can be fully met,without America’s digital infrastructure – the backbonethat underpins a prosperous economy and a strongmilitary and an open and efficient government. Withoutthat foundation we can’t get the job done.It’s long been said that the revolutions in communicationsand information technology have given birth toa virtual world. But make no mistake: This world –cyberspace – is a world that we depend on every singleday. It’s our hardware and our software, our desktopsand laptops and cell phones and Blackberries that havebecome woven into every aspect of our lives.It’s the broadband networks beneath us and the wirelesssignals around us, the local networks in our schoolsand hospitals and businesses, and the massive gridsthat power our nation. It’s the classified military andintelligence networks that keep us safe, and the WorldWide Web that has made us more interconnected than atany time in human history.So cyberspace is real. And so are the risks that comewith it.It’s the great irony of our Information Age – the verytechnologies that empower us to create and to buildalso empower those who would disrupt and destroy. Andthis paradox – seen and unseen – is something thatwe experience every day.It’s about the privacy and the economic security ofAmerican families. We rely on the Internet to pay ourbills, to bank, to shop, to file our taxes. But we’vehad to learn a whole new vocabulary just to stay aheadof the cyber criminals who would do us harm – spywareand malware and spoofing and phishing and botnets.Millions of Americans have been victimized, their privacyviolated, their identities stolen, their lives upended,and their wallets emptied. According to one survey, inthe past two years alone cyber crime has cost Americansmore than $8 billion.I know how it feels to have privacy violated becauseit has happened to me and the people around me. It’sno secret that my presidential campaign harnessed theInternet and technology to transform our politics. Whatisn’t widely known is that during the general electionhackers managed to penetrate our computer systems. Toall of you who donated to our campaign, I want you toall rest assured, our fundraising website was untouched.So your confidential personal and financial informationwas protected.But between August and October, hackers gained accessto emails and a range of campaign files, from policyposition papers to travel plans. And we worked closelywith the CIA, with the FBI and the Secret Serviceand hired security consultants to restore the securityof our systems. It was a powerful reminder: In thisInformation Age, one of your greatest strengths – inour case, our ability to communicate to a wide range

of supporters through the Internet – could also be oneof your greatest vulnerabilities.This is a matter, as well, of America’s economiccompetitiveness. The small businesswoman in St. Louis,the bond trader in the New York Stock Exchange, theworkers at a global shipping company in Memphis, theyoung entrepreneur in Silicon Valley – they all need thenetworks to make the next payroll, the next trade, thenext delivery, the next great breakthrough. E-commercealone last year accounted for some $132 billion inretail sales.In this Information Age,one of Your greateststrengths≥…could alsobe one of your greatestvulnerabilities.But every day we see waves of cyber thieves trollingfor sensitive information – the disgruntled employeeon the inside, the lone hacker a thousand miles away,organized crime, the industrial spy and, increasingly,foreign intelligence services. In one brazen act lastyear, thieves used stolen credit card information tosteal millions of dollars from 130 ATM machines in 49cities around the world – and they did it in just 30minutes. A single employee of an American company wasconvicted of stealing intellectual property reportedlyworth $400 million. It’s been estimated that last yearalone cyber criminals stole intellectual property frombusinesses worldwide worth up to $1 trillion.In short, America’s economic prosperity in the 21stcentury will depend on cybersecurity.And this is also a matter of public safety and nationalsecurity. We count on computer networks to deliver ouroil and gas, our power and our water. We rely on themfor public transportation and air traffic control. Yetwe know that cyber intruders have probed our electricalgrid and that in other countries cyber attacks haveplunged entire cities into darkness.Our technological advantage is a key to America’s militarydominance. But our defense and military networks are underconstant attack. Al Qaeda and other terrorist groupshave spoken of their desire to unleash a cyber attackon our country – attacks that are harder to detect andharder to defend against. Indeed, in today’s world, actsof terror could come not only from a few extremists insuicide vests but from a few key strokes on the computer– a weapon of mass disruption.In one of the most serious cyber incidents to date againstour military networks, several thousand computers wereinfected last year by malicious software—malware. Andwhile no sensitive information was compromised, ourtroops and defense personnel had to give up those externalmemory devices thumb drives changing the way they usedtheir computers every day.And last year we had a glimpse of the future face ofwar. As Russian tanks rolled into Georgia, cyber attackscrippled Georgian government websites. The terroriststhat sowed so much death and destruction in Mumbairelied not only on guns and grenades but also on GPSand phones using voice-over-the-Internet.For all these reasons, it’s now clear this cyber threatis one of the most serious economic and national securitychallenges we face as a nation.

fig m0032electricity grid / usa/ blackout scenario/ northeastern usa / metro area__If you take down the electrical grid, pretty much everythingelse fails. You’re not back in the 1970s; you’re back in the1870s…Much of our infrastructure, including our electricitygrid, was put together without a single thought given tosecurity. It’s not as if security were slighted; it was neverhigh enough on the list to be slighted./ R. James Woolsey/ Former Director of Central Intelligence

fig S0327defense satellite network/ united states military/ north america / europeIn the future, the winner in a war will be the country that has hackedthe other system better and defended its own networks better…PearlHarbor was a surprise attack in one location that killed three thousandAmericans. A cyber attack would be a surprise attack in a thousand orten thousand or a million locations throughout the United States. Almostno one would die, but the political, military and economic damage mightbe as great as the attack on Pearl Harbor./ Richard A. Clarke/ Former Special Advisor to the President on Cyber Security

fig X0017communications system/ washington dc / metro area/ north america / usaIn the intelligence business, we have the dual responsibility of stealingother people’s secrets and protecting our own. You need people who aregood on offense so you can be better at defense…It is a priority issue.And we’d like to be effective enough so that it doesn’t become a crisispriority issue./ Dennis Blair/ Director of National Intelligence 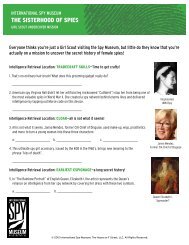 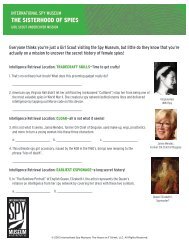 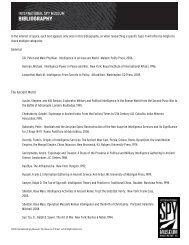