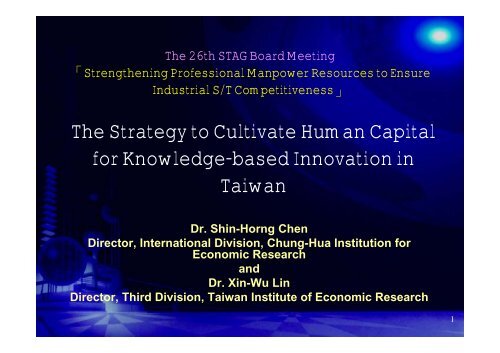 B. Taiwan’s structural weaknesses inknowledge-based innovation BrandingThe escalating pressure of “razor-thin profit” for theIT industry giving rise to the importance of brandingThe policy at table addressing this issue tends tofocus mainly on the managerial and marketing sideand ignore its aspect of technological innovation. Forward-looking Innovation and the Development ofthe Next-generation IndustriesIndustrial innovation in Taiwan is arguably biased, toquite an extent, towards incremental innovation,which may result in a risk of eventually losingmomentum for industrial migration and upgradingand value creation.5

Ⅱ. The Structural Change in Demand andSupply of Human Capital in Taiwan9

A. Forecast of the Long-term Demand & Supplyof Human Capital in Taiwan(cont’ d) Electrical engineering :Over-supply at the entrylevel but over-demand at the advanced level Structural shift in employment Knowledge intensification of human capital needed Industrial Design:Over-demand at both the entryand advanced levels Strengthening of university & industry collaborationfor the cultivation of human capital needed The other fields: An abundant supply of humancapital, which, however, may imply a potentialproblem of oversupply Cross-disciplinary cultivation of human capital andadjustments of curricula needed12

B. Taiwan’s International Network of HumanCapital(cont’ d) Foreign Students from China in the US, EU and JapanUnited States Japan EU60504030201001998 1999 2000 2001 China and India as the major Sources of Foreign Students inthe US, while Taiwan on a Decreasing TrendAttributable in part to the expansion of the domestic higher-educationsystem and the declining birth rateTaiwan’s knowledge linkages with the US (esp. Silicon Valley) seemto be in the process of weakening.18

A. International Mobility of HumanCapital around the Globe Asia, China and India in particular, has become the majorsource of foreigner high-tech workers around the globe.40Distribution of highly skilled expatriates by region of origin35302520151050Asia EU25 Africa South andCentralAmericaOtherEuropeCaribbeanNorthAmericaOceaniaOECDSource: OECD20

B. International Expansion & Relocationof R&D and Demand for Human Capital A Worldwide Trend to Raise R&D Intensity To meet the Lisbon Goal (3% by 2010), the EU alonewill need additional 0.5-0.7 million researchers. Due in part to the aging population, Japan isactively attracting foreign skilled workers, thosefrom China and India in particular. Relaxation of Immigration regulations on foreign ITprofessionals and researchers. Through the Japan Society for the Promotion ofScience (JSPS)to promote post-doctoral studies inJapan of foreigners (up from 537 in 1996 to 1,225 in2000) Some 169,000 foreign skilled workers in Japan in2001 (up from 85,000 in 1992); half of them fromChina21

B. Int’l Expansion & Relocation of R&D andDemand for Human Capital(cont’ d) Despite a large population, shortage ofhuman capital in India may becomepossible and forthcoming.KPMG: a serious shortage of human capitalin the IT area by 2009•Infosys, Tata, and Wipro outreach to ChinaCost advantages of China currently as themain driver•The possibility of India and China workingtogether to redefine the tech world orderExpatriates return to India: some thirtythousand in 18 months23

B. Int’l Expansion & Relocation of R&D andDemand for Human Capital(cont’ d) China’s rapid expansion of the high-tech industryleads to an escalating pressure on human capital. China as the largest IT manufacturer in the world A policy to increase R&D intensity (1% in 2000;1.44%in 2004; 2% by 2010) A policy to Recruit Foreign Knowledge Workers byProviding a Variety of Incentives• an annual target of forty thousand foreign knowledgeworkers set for the period 2006-2010 (the EleventhFive-Year Developmental Plan)24

C. Policies towards Foreign KnowledgeWorkers in East Asia The Incentives Provided by Countries in East Asia Korea:Tax-free for salary Japan : Easing regulations on visa issuance andimmigration control Hong Kong:Easing regulations on work permits andapplication for residentship Singapore: Easing regulations on work permits andapplication for residentship Taiwan Already in Severe Competition with itsNeighboring Countries in Terms of AttractingForeign Talents Not only Taiwan but also Japan, Korea and China canclaim their niches to cooperate with India by takingadvantage of India’s strengths in software.28

Ⅴ. Suggestions for Policy of theCultivation of Human Capital in Taiwan29

A. Challenges ahead for Taiwan in termsof the Cultivation of Human Capital Taiwan will need to go through a substantial transformation interms of economic and industrial development The high-caliber human capital needed may not come outfrom the current developmental trajectory. Taiwan’s international knowledge network regarding humancapital is in the process of structural change, with its currenttrend possibly not favorable to Taiwan. A bad scenario: Brain circulation ( with Silicon Valley) mayturn into brain “diversion” (away from Taiwan).• Brain circulation between the US and East Asia (China, Indiaand Korea) remains or become strengthened, except forTaiwan. Something new need to be done in order to cultivate the highcaliberhuman capital needed. Taiwan’s strengths of recruiting, resourcing & retentionthrough economic development weakening30

End of presentationThank you for your attention32

A. Characteristics of Knowledge-basedInnovation Degree of Knowledge Codification Explicit knowledge vs. Implicit knowledge Degree of Path-Dependence Fashion design vs. product development R vs. D The extent of knowledge being bypassed;possibility ofleapfrogging Relationships with the External Environment:Milieu-related Fashion design (local community) vs. science research(ivory tower) Relationships between the Two Sides of the Transaction:Knowledge Context-related Complexity and specificity of the knowledge system Onsite vs. offsite(All in relative terms)33 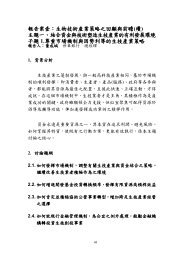 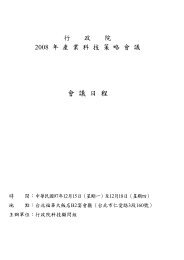