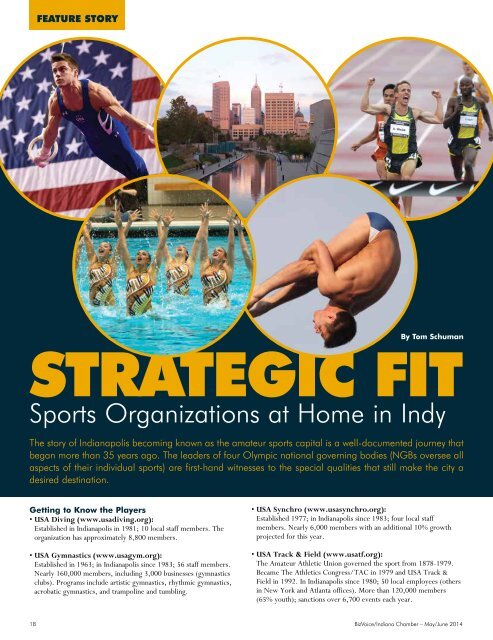 Business of SportsIndianapolis (previous page, top center) is home to the national governing bodies for athletes such as gymnast Sam Mikulak (USA Gymnastics photo/JohnCheng), track star Alan Webb (USA Track & Field photo), diver David Boudia and the 2012 synchronized swimming U.S. National team.“This city, not only has it benefitted fromthe sports effort that it put forward, but it hascontributed to a lot of great sports moments forour country,” says Steve Penny, president andCEO of USA Gymnastics. “We had our firstfemale world champion (Kim Zmeskal)crowned here in Indianapolis in 1991. That’ssomething people around the world rememberfor our sport. There is a tremendous amountof knowledge, respect and admiration forwhat Indianapolis has achieved on a nationaland global basis.”Linda Paul, in the same position withUSA Diving, is an Indianapolis native who hasbeen part of the sports story through variouscommunity roles, including a stint at the IndianaSports Corp. During the selection process forthe 2016 Olympic Trials that were eventuallyawarded to Indianapolis, others on the committeewondered about the city’s persistent desire tohost the event. The direct question: “Whywould this community go to such lengths?”“Lindsey (Hendren, national eventsdirector and also an Indianapolis native) and Iboth looked at each other and said, ‘That’swhat we do here.’“This is the fabric of our community; allthese things have woven together over time.It’s really genuine; it’s not phony. Almost mywhole career has been in this in some way,shape or form. It will be nice to see all thatcome together. We want to give Indianapolisand our state something to be proud of.”Penny, who has attended 10 of the past 13Olympic Games, has been involved with nationaland international sporting events throughouthis career. Asked what sets Indianapolis apart,he offers, “What makes a city special is whenyou feel like you own the town. Indianapolishas done it with Final Fours and the SuperBowl. They’re (NCAA, NFL) used to owningthe stadium and used to having a presence,but it’s another thing to own the city. Youcan showcase sports here because you can ownit. That’s not always the case in bigger cities.”Indy landscapeThere are 39 Olympic sports with nationalgoverning bodies. Twenty-two are located inColorado Springs, Colo., home of the U.S.Olympic Committee. Indianapolis ranks secondwith the four NGBs, with USA Track andUSA Synchronized Swimming (USA Synchro)joining gymnastics and diving in the samedowntown building. Other sports-relatedorganizations (NCAA, USA Football andAmerican College of Sports Medicine to namea few) are also headquartered in the city.The Indiana Sports Corp. shares thefollowing numbers since its formation in1979: host of more than 450 national andinternational events, 17 Olympic Trials andworld championships in basketball, swimming,gymnastics and rowing. (In addition,Indianapolis will host the NCAA Men’s FinalFour for the seventh time in 2015 and SuperBowl XLVI in 2012 resulted in a directeconomic impact of $176 million).“Olympic sports were the cornerstone ofIndiana’s sports movement when severalnational governing bodies chose Indianapolisas their headquarters city,” says Indiana SportsCorp. President Allison Melangton. “Today,Olympic sports remain a large piece of thereputation Indiana has built as a sports leader.“The national governing bodies here inIndiana feature some of the nation’s topsports leaders. These influential individualsbring great value to Olympic sports and toour community in general.”In addition to some of their leading events,the four NGBs bring board members, coaches,meetings and other gatherings to the city.Approximately 1,600 track and field constituentscame to Indianapolis in December for theorganization’s annual meeting at the JW Marriott.“The feedback we got was that it wasone of the best annual meetings they everattended for a number of reasons,” sharesUSA Track CEO Max Siegel, an Indianapolisnative who returned home in May 2012 after20-plus years in executive positions in varioussports and entertainment industries. Siegelcites downtown logistics, the hotel facilityand reasonable costs among the factors thatmade the event a big success.Indianapolis, specifically the IUPUInatatorium, served as the training center forUSA Synchro leading up to the 2012 Olympicsand previous Olympic Trials have taken placein the city. Kevin Warner, chief operationsofficer, explains that the sport is dividedThe Greensboro, North CarolinaColiseum Complex was the site ofthe 2014 AT&T American Cup(USA Gymnastics photo/John Cheng).May/June 2014 – BizVoice/Indiana Chamber 19

geographically into four zones, talent is starting to be more disbursedthroughout the country from its previous stronghold in California andthat, “We like to bring things to Indianapolis as often as we can.”Plenty of partnersCity and state businesses benefit from the presence of the NGBs,maybe none more than Sport Graphics and its longstanding partnershipswith the Indiana Sports Corp., the NCAA and other entities. Penny andSiegel identify additional business relationships for their organizations.USA Gymnastics has relied on City Securities and Faegre BakerDaniels for insurance and legal needs, respectively. The Three SixtyGroup has focused on rebranding and advertising campaigns, with A-1Awards providing medals and trophies for events over the past 15 years.For USA Track, Matchbook is in charge of advertising andcreating collateral material. Siegel terms it an example of a strongvendor/sponsor relationship, as is one with Hightech Signs in FortWayne – which assists with event production throughout the country.An official partner of all four NGBs (and many other organizations)is St. Vincent Sports Performance. All the NGB executives value themedical expertise and assistance – both at home and on the road.As executive director of St. Vincent Sports Performance, RalphReiff has seen the organization grown from seven employees in 1999to 92 today. They include trainers, strength and conditioningspecialists, sports psychologists, a dietitian and more.“The consistent thread (of collaborations with the four NGBs) isthat we are an access point for the athletes of each of those sports intoa health care system,” he details, listing initial evaluations, procedures,rehabilitation and interactions with coaches among the variousservices. St. Vincent Sports Performance is on-site locally and beyondfor track, gymnastics and diving events.“Having organizations such as the Olympic national governingbodies, it adds a group of individuals who make their living fromsport,” he adds. “The CEOs, communications, marketing people infuseyour home community with people who have an understanding of theglobal landscape of sports. It adds a richness to our sports community.”Reiff has been part of that community since the early days, managing themedical aspects of many national and international competitions. Of thegrowing impact of the St. Vincent entity, he says, “One of our goals wasto make Indianapolis not just a destination for events, but teams and athletesto make Indianapolis a destination for training. And we’ve done that.”Team effortWhile focused on their own sports and the levels of competition fromyouth to master’s, the NGB leaders value the opportunity to work together.Paul notes that USA Synchro coaches have been helpful with thesynchronized aspects of diving. Warner says, “It’s good to have thatteamwork and share some resources. It’s very beneficial beingtogether; instead of getting on the phone and calling, the person I needmight just be walking by our office.”Siegel, Penny and their USA swimming counterpart (in Colorado)are teaming on a marketing and promotional platform leading up tothe 2016 Summer Olympics in Brazil.“We’re calling ourselves the Trio to Rio,” Siegel shares with alaugh. He values being able to talk to his Indianapolis colleagues about“best practices, growing memberships, grassroots. Not only is itconvenient, but we lean on each other quite a bit to continue toimprove our organizations.”Special occasionsThe four NGBs have each called Indianapolis home for 30-plusyears. The chief executives grew up in the city (Paul and Siegel),nearby (Warner is originally from Anderson, Indiana and has beenback in Central Indiana for 12 years) or have now been here 15 years(Penny, who was promoted to his existing role and became the fatherof three daughters on the same day in 2005).Penny believes it’s time to move past the amateur sports capitallabel. “I’ve been all over rebranding this town as the sports capital ofAmerica. There is no city in America that galvanizes itself around sportthe way Indianapolis does. They (other cities) may be able to do itevery once in a while, but Indianapolis does it on a regular basis.”The 2015 P&G Gymnastics Championships will take place atBankers Life Fieldhouse in August. It is the fourth time Indianapoliswill host the event, but the first since 2005.The National Congress andTrade Show is an accompanying three-day showcase for the sport.“We want our P&G Championships to be a Super Bowl for thiscity,” Penny continues. “Indianapolis is home. Anytime you’re basicallyhosting people in your home, you want that to be the best. Let’s makesure people leave here … saying that was the best championships ever.That’s the standard we have.”Reiff and Siegel point out that other communities have recognizedthe many benefits of hosting sports events. But Indianapolis has respondedwell to the competition, according to Reiff.For Siegel, part of the evaluation for site selection is infrastructure,as well as ensuring the best possible athlete and fan experiences. “Butthere’s no substitute for when the public and private sectors and the peoplewho are passionate about it come together. It’s just a feeling like no other.”The U.S. Age Group Championships (Riverside, Calif. was the site in 2013) areone of synchronized swimming’s major events (Khai Le photo).Albuquerque served as host for the 2014 USA Indoor Track & FieldChampionships (USA Track & Field photo).22 BizVoice/Indiana Chamber – May/June 2014 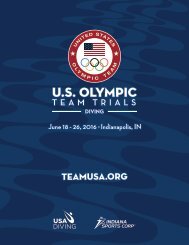 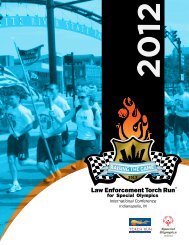 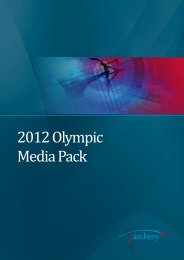 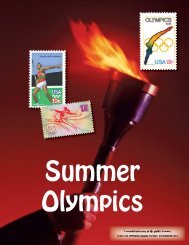 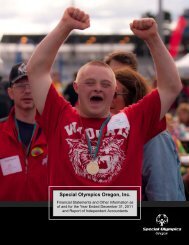 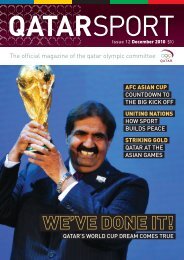 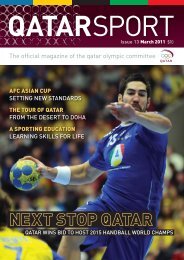 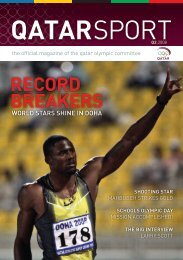 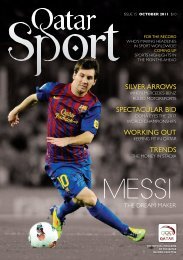 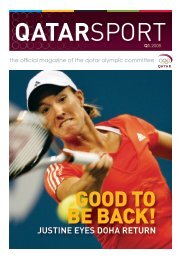 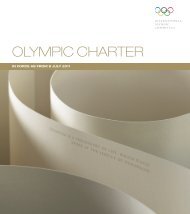 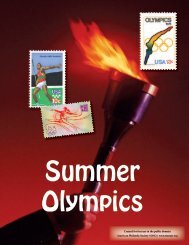 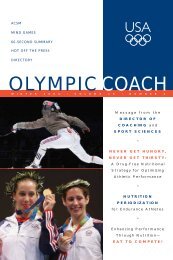 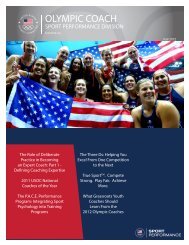 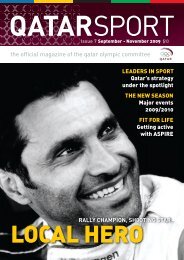 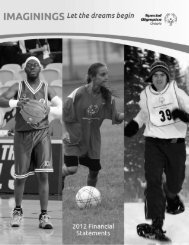 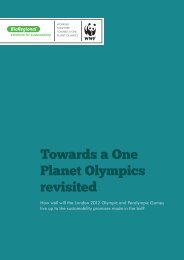 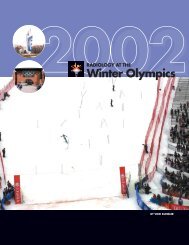