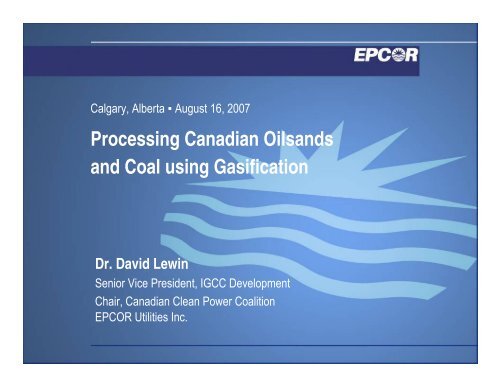 Canada’s abundant coal supply• Coal is, by far, the most abundant fossil fuel inCanada representing 66% of energy reservesAlberta’s supply of coalcontains twice the energyof its conventional crude,natural gas, and bitumencombined.• This vast reserve, used at current rates, will lastfor many centuries, not decades as in the case ofnatural gas and oil, before eventual depletion• Approximately one-fifth of Canada’s electricity isgenerated from coal – more than any other fossilfuel• Alberta, Saskatchewan and Nova Scotia all dependon coal for 70% of their energy needs; coal supplies23% of Ontario’s net generationProcessing Canadian Oilsands & Coal using Gasification ▪ Calgary, Alberta ▪ August 16, 2007 3

Coal GasificationAn IGCC plant would be many times cleaner than vintage coal-fired plantsand the best natural gas facility operating today.• The gasification process virtually eliminates smog-related air emissions, and capturescarbon dioxide – a greenhouse gas• Compared to supercritical coal-fired facilities, IGCC technology has the potential tofurther lower NO x particulate matter, and SO 2 by a significant amount• The IGCC process requires about one-third less water than a pulverized coal plant• An IGCC plant could allow for a relatively pure CO 2 stream available for EnhancedOil Recovery, perhaps in the Pembina Oil Fields• The clean coal process also creates hydrogen – a potential fuel for the future.Gasification may give us a continuous and affordable source of hydrogen to powertomorrow’s hybrid and electric cars.Processing Canadian Oilsands & Coal using Gasification ▪ Calgary, Alberta ▪ August 16, 2007 5

How can gasification technology be commercialized?ISSUE: The technology is known, but has not yet been proven at a utilitysizedfacility or with Alberta’s low sulphur mid-rank coal• Demonstration plants built in other countries have experienced high capital andoperating costs (at least 1/3 higher) and issues with operating reliability.• Experience on a utility-sized (500+MW) IGCC facility is needed to better understandand manage construction and operation costs in a northern climate.• To develop this facility, engineering and design work is required, focused on:– Adapting the technology to work with the type of coal found in Alberta;– Removing emissions of concern;– Commercial-scale geological storage of CO 2;– Cost competitiveness and cost certainty, related to both capital and operating costs;– Construction and operation in a northern climate.Processing Canadian Oilsands & Coal using Gasification ▪ Calgary, Alberta ▪ August 16, 2007 9

Canadian commercialization of gasification technologyCommercialization is expected to take place over three phases with a total requirementof $33 million, following which a consortium of investors would be in a position to makea decision on building a utility-scale pilot plant. To facilitate the timeline, EPCOR andthe Alberta Energy Research Institute have both agreed to commit up to $11 millioneach to the project so it can proceed expeditiously.Phase lPhase llPhase lllTechnology Selection and Project DefinitionFront-End Engineering Design, 2006 – 2008 (Genesee site)Regulatory Environmental Permitting for Constructionleads to a decision to build an IGCC facility in Alberta,2009-2015Processing Canadian Oilsands & Coal using Gasification ▪ Calgary, Alberta ▪ August 16, 2007 10

ConclusionsWith IGCC, coal-fired generation carries an environmental footprint that willtake us into a GHG constrained future.• Production of clean power with 90% CO 2 capture and removal of all emissions ofconcern is technically feasible and can become economically viable at certainlocations.• Gasification costs and reliability depend on feed quality. There is little experience withlow rank lignites, sub-bitumous coal, and coal-coke mixtures.• IGCC technology offers investors the flexibility to change feedstocks and evenpotential products. This provides a sense of certainty in light of tougher emission andGHG standards, and a changing regulatory regime• IGCC taps into Alberta’s vast coal reserves to provide a secure supply of electricalenergy in a more environmentally acceptable wayProcessing Canadian Oilsands & Coal using Gasification ▪ Calgary, Alberta ▪ August 16, 2007 12 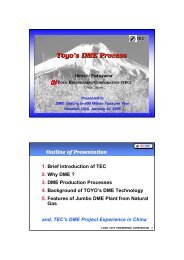 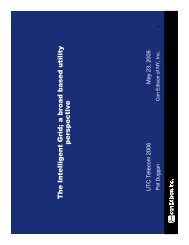