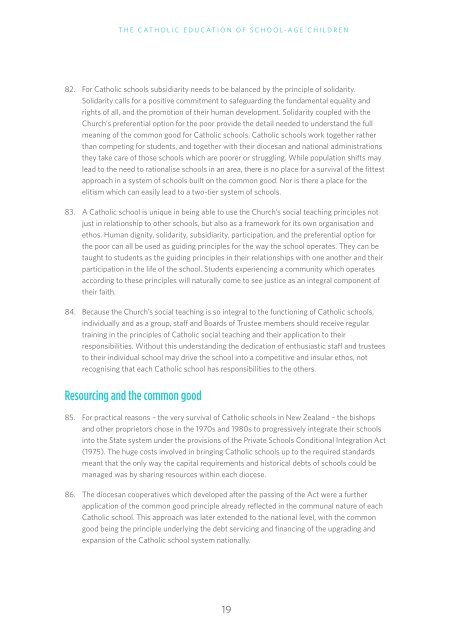 The Catholic Education of School-Age Children82. For Catholic schools subsidiarity needs to be balanced by the principle of solidarity.Solidarity calls for a positive commitment to safeguarding the fundamental equality andrights of all, and the promotion of their human development. Solidarity coupled with theChurch’s preferential option for the poor provide the detail needed to understand the fullmeaning of the common good for Catholic schools. Catholic schools work together ratherthan competing for students, and together with their diocesan and national administrationsthey take care of those schools which are poorer or struggling. While population shifts maylead to the need to rationalise schools in an area, there is no place for a survival of the fittestapproach in a system of schools built on the common good. Nor is there a place for theelitism which can easily lead to a two-tier system of schools.83. A Catholic school is unique in being able to use the Church’s social teaching principles notjust in relationship to other schools, but also as a framework for its own organisation andethos. Human dignity, solidarity, subsidiarity, participation, and the preferential option forthe poor can all be used as guiding principles for the way the school operates. They can betaught to students as the guiding principles in their relationships with one another and theirparticipation in the life of the school. Students experiencing a community which operatesaccording to these principles will naturally come to see justice as an integral component oftheir faith.84. Because the Church’s social teaching is so integral to the functioning of Catholic schools,individually and as a group, staff and Boards of Trustee members should receive regulartraining in the principles of Catholic social teaching and their application to theirresponsibilities. Without this understanding the dedication of enthusiastic staff and trusteesto their individual school may drive the school into a competitive and insular ethos, notrecognising that each Catholic school has responsibilities to the others.Resourcing and the common good85. For practical reasons – the very survival of Catholic schools in New Zealand – the bishopsand other proprietors chose in the 1970s and 1980s to progressively integrate their schoolsinto the State system under the provisions of the Private Schools Conditional Integration Act(1975). The huge costs involved in bringing Catholic schools up to the required standardsmeant that the only way the capital requirements and historical debts of schools could bemanaged was by sharing resources within each diocese.86. The diocesan cooperatives which developed after the passing of the Act were a furtherapplication of the common good principle already reflected in the communal nature of eachCatholic school. This approach was later extended to the national level, with the commongood being the principle underlying the debt servicing and financing of the upgrading andexpansion of the Catholic school system nationally.19