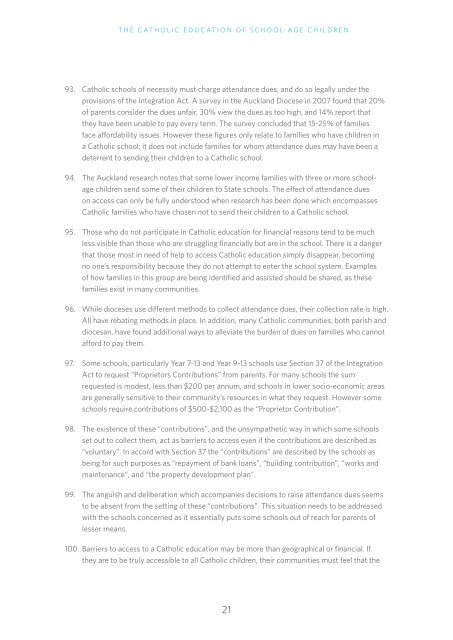 The Catholic Education of School-Age Children93. Catholic schools of necessity must charge attendance dues, and do so legally under theprovisions of the Integration Act. A survey in the Auckland Diocese in 2007 found that 20%of parents consider the dues unfair, 30% view the dues as too high, and 14% report thatthey have been unable to pay every term. The survey concluded that 15-25% of familiesface affordability issues. However these figures only relate to families who have children ina Catholic school; it does not include families for whom attendance dues may have been adeterrent to sending their children to a Catholic school.94. The Auckland research notes that some lower income families with three or more schoolagechildren send some of their children to State schools. The effect of attendance dueson access can only be fully understood when research has been done which encompassesCatholic families who have chosen not to send their children to a Catholic school.95. Those who do not participate in Catholic education for financial reasons tend to be muchless visible than those who are struggling financially but are in the school. There is a dangerthat those most in need of help to access Catholic education simply disappear, becomingno one’s responsibility because they do not attempt to enter the school system. Examplesof how families in this group are being identified and assisted should be shared, as thesefamilies exist in many communities.96. While dioceses use different methods to collect attendance dues, their collection rate is high.All have rebating methods in place. In addition, many Catholic communities, both parish anddiocesan, have found additional ways to alleviate the burden of dues on families who cannotafford to pay them.97. Some schools, particularly Year 7-13 and Year 9-13 schools use Section 37 of the IntegrationAct to request “Proprietors Contributions” from parents. For many schools the sumrequested is modest, less than $200 per annum, and schools in lower socio-economic areasare generally sensitive to their community’s resources in what they request. However someschools require contributions of $500-$2,100 as the “Proprietor Contribution”.98. The existence of these “contributions”, and the unsympathetic way in which some schoolsset out to collect them, act as barriers to access even if the contributions are described as“voluntary”. In accord with Section 37 the “contributions” are described by the schools asbeing for such purposes as “repayment of bank loans”, “building contribution”, “works andmaintenance”, and “the property development plan”.99. The anguish and deliberation which accompanies decisions to raise attendance dues seemsto be absent from the setting of these “contributions”. This situation needs to be addressedwith the schools concerned as it essentially puts some schools out of reach for parents oflesser means.100. Barriers to access to a Catholic education may be more than geographical or financial. Ifthey are to be truly accessible to all Catholic children, their communities must feel that the21