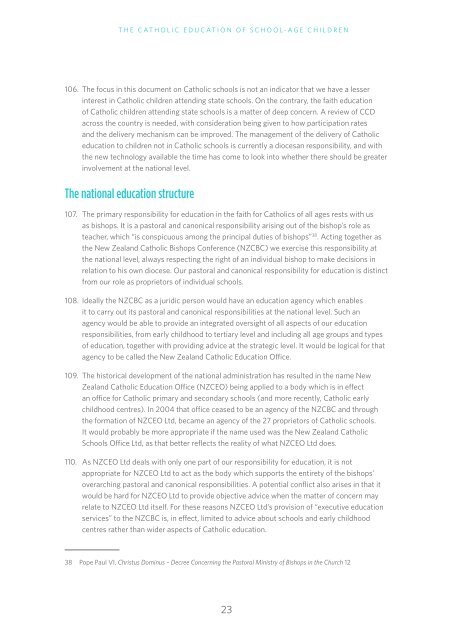 The Catholic Education of School-Age Children106. The focus in this document on Catholic schools is not an indicator that we have a lesserinterest in Catholic children attending state schools. On the contrary, the faith educationof Catholic children attending state schools is a matter of deep concern. A review of CCDacross the country is needed, with consideration being given to how participation ratesand the delivery mechanism can be improved. The management of the delivery of Catholiceducation to children not in Catholic schools is currently a diocesan responsibility, and withthe new technology available the time has come to look into whether there should be greaterinvolvement at the national level.The national education structure107. The primary responsibility for education in the faith for Catholics of all ages rests with usas bishops. It is a pastoral and canonical responsibility arising out of the bishop’s role asteacher, which “is conspicuous among the principal duties of bishops” 38 . Acting together asthe New Zealand Catholic Bishops Conference (NZCBC) we exercise this responsibility atthe national level, always respecting the right of an individual bishop to make decisions inrelation to his own diocese. Our pastoral and canonical responsibility for education is distinctfrom our role as proprietors of individual schools.108. Ideally the NZCBC as a juridic person would have an education agency which enablesit to carry out its pastoral and canonical responsibilities at the national level. Such anagency would be able to provide an integrated oversight of all aspects of our educationresponsibilities, from early childhood to tertiary level and including all age groups and typesof education, together with providing advice at the strategic level. It would be logical for thatagency to be called the New Zealand Catholic Education Office.109. The historical development of the national administration has resulted in the name NewZealand Catholic Education Office (NZCEO) being applied to a body which is in effectan office for Catholic primary and secondary schools (and more recently, Catholic earlychildhood centres). In 2004 that office ceased to be an agency of the NZCBC and throughthe formation of NZCEO Ltd, became an agency of the 27 proprietors of Catholic schools.It would probably be more appropriate if the name used was the New Zealand CatholicSchools Office Ltd, as that better reflects the reality of what NZCEO Ltd does.110. As NZCEO Ltd deals with only one part of our responsibility for education, it is notappropriate for NZCEO Ltd to act as the body which supports the entirety of the bishops’overarching pastoral and canonical responsibilities. A potential conflict also arises in that itwould be hard for NZCEO Ltd to provide objective advice when the matter of concern mayrelate to NZCEO Ltd itself. For these reasons NZCEO Ltd’s provision of “executive educationservices” to the NZCBC is, in effect, limited to advice about schools and early childhoodcentres rather than wider aspects of Catholic education.38 Pope Paul VI, Christus Dominus – Decree Concerning the Pastoral Ministry of Bishops in the Church 1223