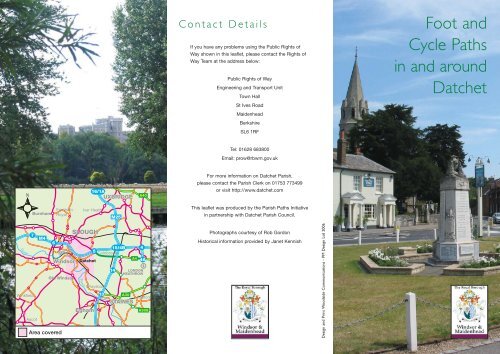 Datchet Parish Leaflet - The Royal Borough of Windsor and ...

Datchet Parish Leaflet - The Royal Borough of Windsor and ...

A Brief Histor yHistorically Datchet has been a place of more significance than itssize would suggest, partly due to the Thames crossing pointopposite Windsor Castle which existed at least from the 1200s. Aferry (and later a bridge) was provided by the Crown as a routebetween the castle and the road to London through Datchet,primarily for those on royal business. In Tudor and Stuart timesthis made the village attractive to courtiers, officials and Citymerchants as it still is to commuters today.The oldest houses are in the High Street and around the Greens,although most now have Georgian or mock-Tudor facades. TheRoyal Stag pub is the earliest building in the village and is reputedto be haunted; the Manor Hotel was owned by the Montagu andBuccleuch families as Lords of the Manor, while the Morning Starwas a private house until it became a beerhouse in 1850. Theoriginal medieval church was entirely rebuilt between 1857 and1864 and contains fine Victorian stained glass.While there were never many footpaths in Datchet, over timeseveral have been lost, reduced in length or follow a different routedue to land use and transport developments in the 19th and 20thcenturies. The railway arrived in 1848, slicing through a field accessroad, now represented by footpath 5 over the railway line; the M4 inthe 1960s changed the course of roads around the route offootpaths 1 and 7; the reservoir caused a great loss of land and of apath to Horton, while the railway, gravel-digging and the ThamesWater pumping works have all altered the route of footpath 6 whichleads to Wraysbury. Most recently, the Jubilee River hasgreatly improved the access to and route of footpath 4,whilst footpath 2 has been replaced by a cycle trackconnecting to the Myrke.The Thames tow path was always on the Windsor side of the riverwhich explains why there is now so little public access to the riverin Datchet. The bank on this side was privately owned for most ofits length through the parish except for the very short stretch ofriverfront opposite the end of the High Street. This was where theferry service once carried horse and foot traffic across to WindsorCastle and the town until it was replaced in 1706by a bridge. A plaque at the riverfront gardencommemorates this ancient river crossing.The bridge was removed in 1850 when theVictoria and Albert bridges were built aboveand below the village. Two footpaths, 8 and9, now provide river access where there waspreviously no right of way.Path Information• Take care when crossing Eton Road between the cycle pathand footpath 3• Footpath 3 is within Datchet Golf Course - please keep to thepath, keep dogs on the lead and watch out for flying balls!• Please take care when using the footbridge on footpath 5 as itcan be slippery when wet• Footpath 9 towards Windsor ends with steep steps which takeyou to the busy Windsor Road. Take care when crossing here ifyou want to access footpath 10, as a bend in the road meansthat visibility is poor.Follow the Country Code• Be safe – plan ahead and follow any signs• Leave gates and property as you find them• Protect plants and animals, and takeyour litter home• Keep dogs under close control• Consider other people[Countryside Agency 2004]Par kingDatchet has two public car parks - one is next to the library onHorton Road and the other is next to the railway station accessedfrom The Avenue. There are also two lay-bys along SouthleaRoad, prior to the start of footpath 8.Links to other routesFrom footpath 8, continue along Southlea Road to rejoin theThames Path, which will take you towards Old Windsor andRunnymede.Walking away from Datchet, from the end of footpath 9 continuealong Windsor Road to rejoin the Thames Path within the HomePark in Windsor.The cycle path linkingEton Road to TheMyrke leads toroutes along theJubilee River andwithin Eton Collegeplaying fields.BibliographyThe paths shown in this leaflet can be followed on the OrdnanceSurvey Explorer Series map Number 160. For additional cycleroutes within the surrounding area, please see the Sustransweb site at http://www.sustrans.co.uk. 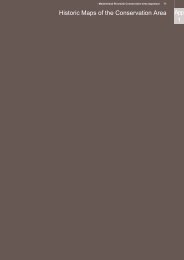 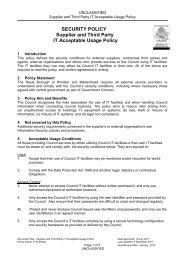 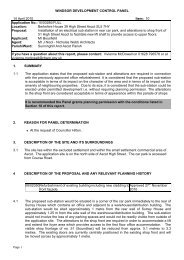 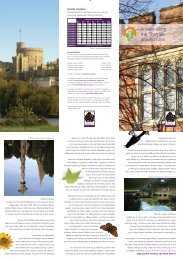 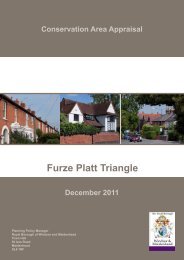 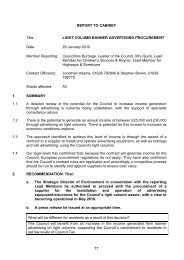 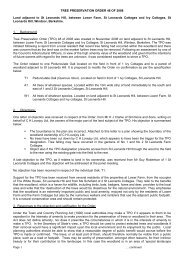 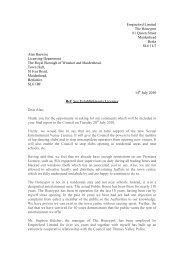 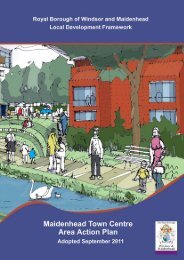 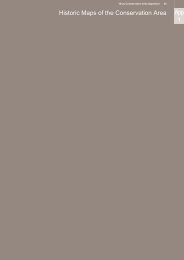 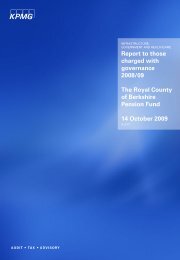 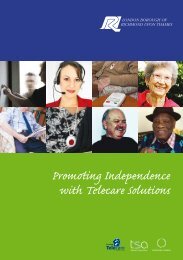 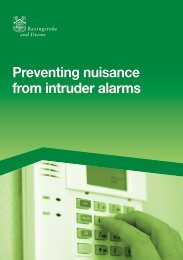 Magazine: Datchet Parish Leaflet - The Royal Borough of Windsor and ...