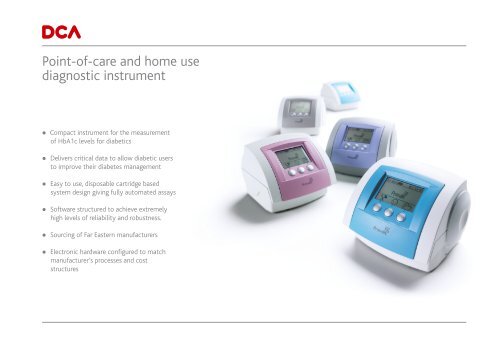 1 2 34The in2it instrument is a fully automated, cartridge based,diagnostic tool that allows users to monitor their HbA1c levelsat home or at the point-of-care. By interrogating the historicdata stored on board, diabetic users can manage their longtermHbA1c levels to achieve significant improvements in theircondition.DCA was responsible for all aspects of the instrument designup to the delivery of representative injection moulded preproductionprototypes to the client, Provalis Diagnostics. Fromthis point in the development process, design responsibility wastransferred to an in-house team at Provalis to allow refinementin parallel with the assay chemistry and protocols.Building on DCA’s earlier work, Provalis successfully achieved510k approval as a major step towards full product release whichtook place in the last quarter of 2004, with the formal productlaunch taking place at the medical trade show and congress,MEDICA 2004, in Germany.DCA’s contribution to the design of the injection-moulded preproductionprototype included the styling of the instrument andthe user ergonomics, including the design of the user interfacelogic and its graphical implementation.The mechanical design was developed by DCA in parallel withthe styling and DCA also provided the electronic hardwaredesign for the pre-production prototypes. The instrument wasspecifically tailored to match the requirements of the Far Easternmanufacturer recommended by DCA to produce and assemblethe in2it. As a result, each subassembly is produced with itsown dedicated PCB, allowing it to be assembled and tested inisolation before integration into the final unit.The software used on the pre-production prototypes was authoredby DCA. This allowed Provalis to undertake representative workwith the assay and formed the basis of the production softwaredeveloped by Provalis. Controlling the motors to achieve thenecessary high cartridge torques and positional accuracies wasone of the key functional challenges. It was also critical that atno time was the user put at risk, either by the operation of theinstrument, or by the data displayed during, or after, an HbA1ctest.Throughout the development process, Provalis and DCAworked closely together so that the instrument, cartridge andassay were developed and optimised in parallel. The result is acompact, reliable system that is attractive and easy to use andwhich offers diabetic users the best available method for longterm control of their condition.John Curtis, Provalis Diagnostic’s Managing Director, said,‘The product’s many advantages, including its lab accuracy,small size, operability via battery and general flexibility, answerthe markets needs. Its effects on Provalis’ diagnostics sales willbe fundamental’Clinica, August 20041. CAD assembly2. MoldFlow analysis3. FEA analysis4. Benchtop rigDCA Design International 19 Church Street Warwick CV34 4AB UK T +44 (0)1926 499461 F +44 (0)1926 401134 E medical@dca-design.com W www.dca-design.comBRO_071A