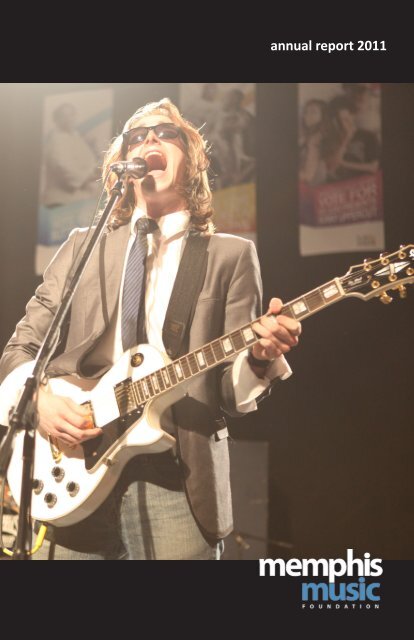 Contents may not be reprinted without express written permission.

To work with the

community to cultivate a

musicians and the music

industry with resources and

opportunities for growth and

Award from the Recording Academy® as a part of the

GRAMMY® Awards. Memphis was well represented as the

Music Foundation produced a breakfast honoring me and the

numerous Memphis artists and industry that were recognized

with nominations. This year the Memphis Horns will receive

nominees and music supporters will attend a special breakfast

Mississippi and Louisiana who honor their artists during the biggest

weekend in music. In fact, Memphis is the only city hosting such an

event. Congrats to the Memphis Horns for their outstanding contribution

to Memphis music and the global soundtrack.

Some things remained the same in 2011 -- the Memphis Music Resource

Center is still the country’s only full-access, fully staffed facility

for the professional development of musicians and music businesses.

companies to Memphis to share music business trends and strategies

with our music community. Pledge Music explained how to raise

money for your projects while TopSpin and TuneCore talked tech, from

distribution to building a fan base, and artists like Wiz Khalifa and Martin

Atkins gave some tough love on secrets to a profitable career.

We introduced the Memphis Music Launch, an innovative music-based

career launch initiative. The Launch Memphis partnership is the first

music contest in the country to weigh business acumen equally with

talent. Not only did the program launch artists like The Delta Collective

and Arvada, it also spawned numerous collaborations. We’ll do it again this year with bigger and better

Our Latin outreach continued through the Cante el Exito program. It offers a staff-guided track through the

MRC for three of our Hispanic acts. The goal is to raise their income by 20 percent but also give them the

foundation of knowledge required for operating as an entrepreneur in the music business. In October, we

expanded the city-wide Memphis Means Music Week to the entire month. We kicked it off with a partnership

combining our Plug In Music Expo and the Recording Academy®’s GRAMMY® GPS. The super conference

in workshops and scheduled one-on-one mentoring with industry experts. We introduced GPS keynote

speaker Daniel Glass, founder of Glassnote records. I was impressed with his knowledge of Memphis music

and how our sound and process has influenced his vision for Glassnote.

One of my favorite projects of the year was teaming up with Indie Memphis in November. Our focus on

music in film manifested as an educational component with music showcases in front of film viewings. We

also debuted a Memphis music compilation and sent it to top music supervisors in film. This is a partnership

we will continue. As my friend and Ardent founder John Fry says, “music has no better friend than

film.” Memphis is music and what better film festival for music supervisors to attend than Indie Memphis?

We ended the year with a music community holiday party. The Blues Foundation, Beale Street Caravan,

food and connections. 2012 is going to be an exciting year for the Music Foundation!

as the country’s only full-access, fully staffed facility

for the professional development of musicians and music

industry. We produced 20 workshops and 25 engineering/

some of the nation’s most cutting edge music technology

mavericks such as Tunecore’s Jeff Price and Wiz Khalifa.

through programs such as Memphis Music Launch. The

partnership with Launch Memphis. Read more about it

2011 In the Studio Workshops

“Every time I sit on a panel for the Memphis

Music Foundation, I notice that the current

group of attendees are a little more knowledgable

than the last group. In a lot of cases

they already know the information that is

being presented, which is a good thing. As

the future of the music industry in Memphis

looks that much brighter.”

In 2011 the MRC continued its popular In the Studio series, offering regular sessions in recording

studios around Memphis and at the Resource Center using our digital audio workstation.

From basics to advanced techniques, some of the highlights of the year included workshops

at Sun Studios with Jeff Powell (pictured top right) and Matt Ross-Spang, and visits to Royal

The MRC also welcomed key industry experts for free workshops with members, including

Wallace of Pledge Music. It is sessions

and direct-to-fan marketing to fan

At the TuneCore workshop, Price

talked about the six rights embodied

within a copyright, which is essential

knowledge for any artist, allowing

them to control how their music is

used and how they gain revenue

MRC members to the Pledge platform,

a unique fan-funding service that works

hands-on with artists to determine

projects. After the initial workshop,

Amy then scheduled a second visit to

Varden to meet more extensively with

Pledge Music sees Memphis as a

key market to work with funding

forward. The MMF was

excited to play a central role in

for the first time and sparking

what will hopefully be a long

and lucrative relationship for

In 2011, the Memphis Music Foundation

made history with the Memphis Music

Launch (MML): a creative and entrepreneurial

experiment that brought artists together with

and take a song from concept to completion

(with accompanying business plan). At

the conclusion of the Launch Weekend in

on to the July 8 MML Showcase at the New

Daisy Theater on Beale and one winner was chosen to

receive an industry prize package designed to launch a career.

That winner was rock-fusion act The Delta Collective. The band had one of the most unique projects to

emerge from the Launch weekend in April. No single band member had met another prior to arriving at

EmergeMemphis that day, but when presented with the rough draft of band leader Brad Riales’ song “Valley

of Kings,” the musicians contributed their musical backgrounds of rock, rap, jazz and Latin to come up

with the final product. The song was featured as the centerpiece of their set at the MML Showcase. Each

participating act was judged by a panel of industry experts on musicianship,

creativity, strength of performance and

strength of business plan. By taking the title, The

played the RiverArts Festival in 2011 and will see

(From top) Joe Petrie of Kim Garmon the the

lyn Welch of Sunny Uppercut hits a note during the

Over 1,300 people turned out to hear new music

and cheer for their favorite Memphis Music Launch

act at the July showcase, and their votes were

central to deciding the winner. Each attendee was

with the judges’ performance and business plan

and Atlanta to evaluate the acts, including publisher

The performances were exceptional with Delta Collective and

But there was more than one winner of the Memphis Music

launch. The program launched the careers of several acts.

Since the Pitch Weekend, the Foundation has continued to

work closely with all of the eight semi-finalists. Butta MD has

from local industry and media. Pat 24/7 is preparing to release

a full length record that will include his pitched song from

with the hip hop dream team of Timbaland and Wiz Dumb.

She has also been in sessions for Cher and Michael Bolton. Kim

amassed quite a following. CJ Tate received a management

(Clockwise from top) Rage of

at the MML Showcase; MML

in her showcase set; Launch

film an interview for WMC

tracks guitar during the Launch

WRITE IT, PERFORM IT, RECORD IT IN JUST 48 HOURS

working with the Memphis

staff helped him and his

every facet of launching

the band with registering

advised them on performance rights organizations,

options and set up a PayPal account to accept

online purchases, and connected them with a

bio writer and a publicist.

You can find out more about the Patrick Dodd

Trio at PatrickDoddTrio.com and catch them

several nights a week at The Blues Hall or Rum

“Working with the Music Resource Center staff has helped me

achieve huge gains for my career. The MRC has assisted me in

developing a solid online business structure for my music production

since meeting with the MRC staff. Due to referrals and recommendations

from the MRC, my clientele has actually doubled.

During my initial artist assessment with Cameron Mann, we discussed

ways to increase revenue from the services that I offer. Since

then, I’ve successfully developed a second business that stemmed

from resources that were originally used promote my music production

website. The company has since (over the course of four

months) generated profits that range in the thousands. I’ve used

the printed information from the center to help develop a detailed

2011 was another busy and successful year for Music Foundation programs. As

you read about in our summer newsletter, we took artists and teams to SXSW

in Austin, Texas and Tin Pan South in Nashville in March as part of our Memphis

In October, we joined with the Recording Academy to host our third annual Plug

In Expo in conjunction with GRAMMY GPS at the Stax Museum of American Soul.

one-on-one time with industry pros. Also in October, we expanded the citywide

Memphis Means Music Week to the entire month. The month kicked off with

music scene all across the city.

We continued our commitment to our Hispanic members in

has been working since last summer with three artists to offer

a staff-guided track through the Music Resource Center and

increase the acts’ income by 20 percent over a 12-month period.

These artists performed in a Latin heritage day celebration at the

Levitt Shell. We also partnered with the Day of the Dead committee

to present the musical performances for this special day of

Indie Memphis Festival teamed up again with the Music

Foundation to focus on music in film during November. The

performances in front of film viewings. 2011 debuted a Memphis

music compilation for music supervisors and music directors to

consider for their projects. To date the CD and digiytal release

gained a licensing agreement for one of the acts featured on it.

In November, we invited our friends and donors to celebrate

(From top) Scott Bomar gets interviewed at Plug In; Grace Askew, Elliott Morris and

Ron Franklin after sets at the Bluebird Cafe; MMF Latin Heritage Celebration at the

Records CEO Daniel Glass and The Bar-Kays’ James Alexander at Plug In.

In case you haven’t seen it, the MRC got a visit from

CNN’s Tom Foreman for a segment called Building Up

America. The CNN crew got a tour of the MRC from

Music Foundation President Dean Deyo and had a talk

with Board Chairman Al Bell, as well as MRC members

aired in a half-hour long special in May. Tom Foreman,

on his corresponding blog, wrote “We are in Memphis

as I write this, and I must say I am really impressed

music industry… There, pretty much anyone who is

interested in music can come and learn more… It’s all

free. And it’s working… it was really uplifting.”

The Foundation is funded, in part, by public and private

prosperity in Memphis and Shelby County. MemphisED is

The Memphis Chamber of 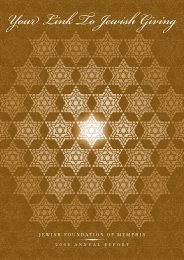 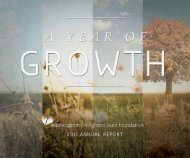 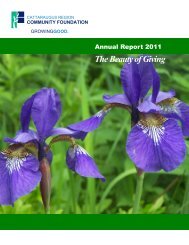 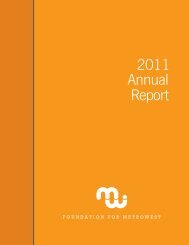 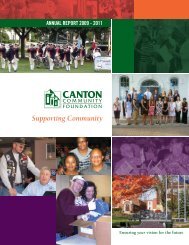 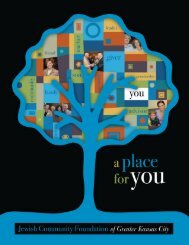 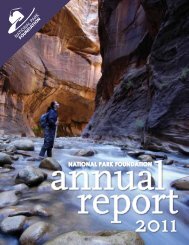 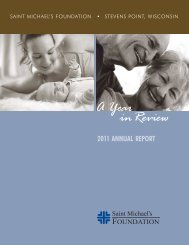 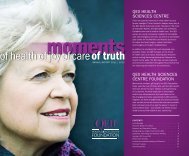 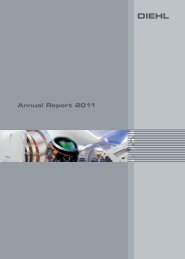 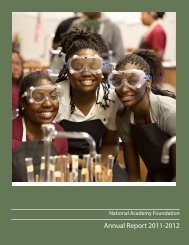 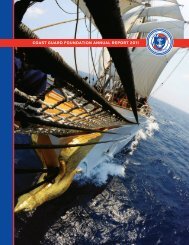 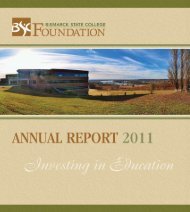 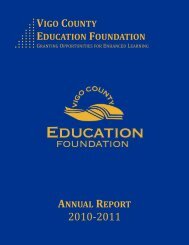 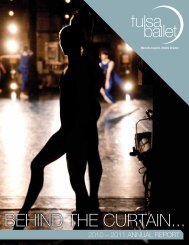 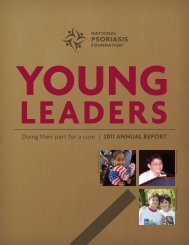 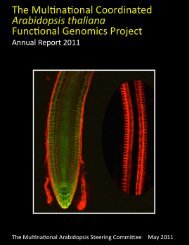 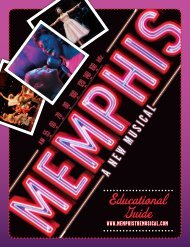