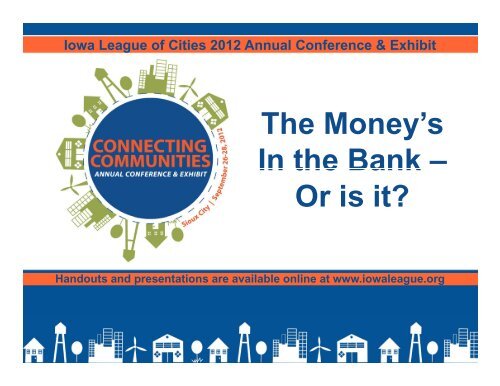 The Money's In The Bank-Or Is It? - Iowa League of Cities

The Money's In The Bank-Or Is It? - Iowa League of Cities

Some names that have disappeared, acquired or ceased operation

Others required bailouts or TARP, or converted to banks (sometimes both)

Were Rating Agencies complicit in the subprime process?TheFinancial i Crisis ii Inquiry Commission i reported in January 2011 that:"The three credit rating agencies were key enablers of the financialmeltdown. The mortgage-related securities at the heart of the crisiscould not have been marketed and sold without their seal of approval.Investors relied on them, often blindly. In some cases, they wereobligated to use them, or regulatory capital standards were hinged onthem. This crisis could not have happened without the rating agencies.Their ratings helped the market soar and their downgrades through2007 and 2008 wreaked havoc across markets and firms.”Note that the FCIC voted along party lines to approve (or disapprove) theabove statement and the entire report.

Rating Agencies now are more important than beforeThe absence of bond insurance companies, coupled ld with ih lendersrequirements to know who they are lending to, lenders now more than ever.A lender can also be called a bondholder. A bond, note, lease, loan or otherobligation simply evidences the interest that a lender has in a borrower’sobligation to pay.Rating agencies have changed and evolved• New conflict of interest requirements• Separation of analysts from fee quotes and pricing• More rotation of analysts from state to state• Better written criteria; process for receiving feedback on criteria• More detailed reports coupled with a longer timeline toward assigningratingMany investors rely on rating agencies more today than in the pastAs Yogi Berra once said: “It's deja vu all over again"

Fortunately, Iowa is not one of those statesh b i i i i i i d fill h i“A happy boost in economic activity in Iowa is expected to fill those rainyday accounts this year with about $600 million, and leave another $280million in extra money.” The Des Moines Register, August 23, 2011

It’s Not all doom and gloomEurope’s stress causes investors to flee to a safe haven, currently, U. S.Treasuries and high quality municipal bondsIowa has a strong economy relative to the rest of the U.S.• statewide average unemployment of 5.2%• 3% below national averageIowa has a growing income base• estimated increase in state revenue of 4%• Preliminary i FY13 sales tax receipts est. 3.6% higher h than FY12Iowa municipal securities have been well received by the markets nationallydue to• our reputation for low debt,• paying bills on time,d th di t l d f t th t h f th bli ’ t t di• and the direct pledge of taxes that secures much of the public’s outstandingdebt.

Now is the Time to consider best practicesIt’s always easy to seek forgiveness for past sins when one is on one’sdeathbed.It’s not nearly as easy to build, in this case, a fiscally yprudent operation thatprotects the governmental operation in good and bad fiscal times, providesadequate reserves, fully funds necessary public services, and anticipatesfuture capital requirements such that spikes in governmental costs (userfees, tax rates etc) are avoided.If your community does a 5-year budget, and that budget falls out of balancein the fifth year, an appropriate response is NOT to simply start doing 4-yearbudgets.

We tend to be weaker with (again, in general)…1. Multi-year li budgets.1. We don’t know if our current spending pattern will cause a fiscal deficit in afuture year.2. We’re not good communicating with our partners, employees and taxpayersabout future fiscal issues2. We don’t know what our future CIP will:1. do to our tax rates2. whether our future CIP can be funded within our debt limit3. whether our future CIP can be funded within our tax rate goal3. We don’t know whether our utility rates are sufficient to avoidsignificant increases in the future4. We tend to not increase utility rates if we are fund balance positive,even if that positive has declined the last few years5. We don’t have written policies and procedures regarding fiscaloperations

Sample ideas for a Basic Debt Management PolicyGeneral Obligation i approved by voters paid over not more than 20 yearsGeneral Obligation for annual CIP paid over not more than 10 yearsNo more than X % of debt limit shall be utilizedUtility & Enterprise debt paid over not longer than useful life of improvementBond refinancings with minimum net present value savings of ___%Short term debt shall be avoided as much as possibleNo variable rate debt involving a put optionNo derivative productsCapital projects should be funded immediately upon completion of bidding, if notsooner, such that capital projects are funded out of the intended sourceNo debt for annual operating costs

Should the rating agency control your life?Borrowing is a small part of most cities’ i overall operationFor most cities, debt payments are 10%-20% of annual budget (excludingcapital improvements)Elected officials are responsible to voters, not rating agenciesBut, you have a fiduciary responsibility as a Councilor. Some of the fiduciaryresponsibilities of the City Council:1. Protect fiscal position2. Provide and serve for the basic needs of the community3. There is NO responsibility to keep tax or utility rates as low as possibleWhich one of these statements is fiscally strongest?1. We haven’t raised taxes for __ years.2. We have been able to live within their means for __ years, fully funded capitalimprovements, not deferred capital items, and currently have plans in place tofund future capital improvements using revenue assumptions that look like __”

Why wouldn’t a city want written policies and a funded CIP?Staff and elected officials i don’t feel that they have the time creating themStaff and elected officials have difficulty living by the planPolicies i require officials i to do extra work to ensure compliancePolicies remove the knee-jerk ability to do whatever you want, when youwantVoters might un-elect you for failing to address their perceived immediateneed because you failed to do something that was prohibited by the policyor not fundable by the CIPTaxes or utility rates might go up, services might have to be cut or programseliminated because, following written policies, you realized that you cannotsustain a certain service in the future at current income and expense levels.

Why would you want written policies and a written CIP?Certain decision i making can be removed somewhat from political i l pressureStaff and Council are aligned as to the goals and expectations, and one isnot putting forth ideas to the other inconsistent with these expectationsCommunication with the public is easy and straight forwardRequests for items not on the CIP are easy to addressHaving a written CIP does not remove the need for elected officials and staffto annually review the CIP, prioritize the projects, and ensure that funding isavailable (consistent with the financial policies), thus annual council reviewscan infuse current council thinking regarding projects, timing, priorities etc. 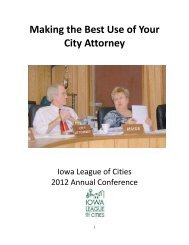 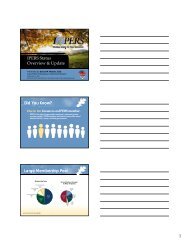 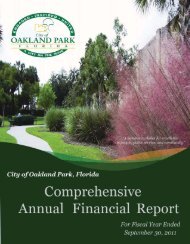 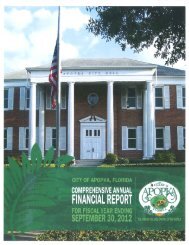 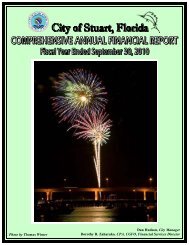 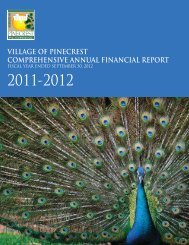 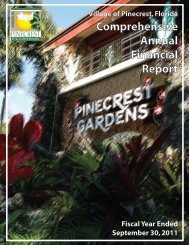 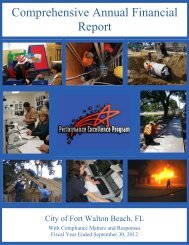 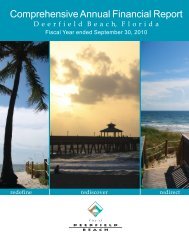 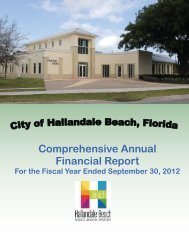 Magazine: The Money's In The Bank-Or Is It? - Iowa League of Cities