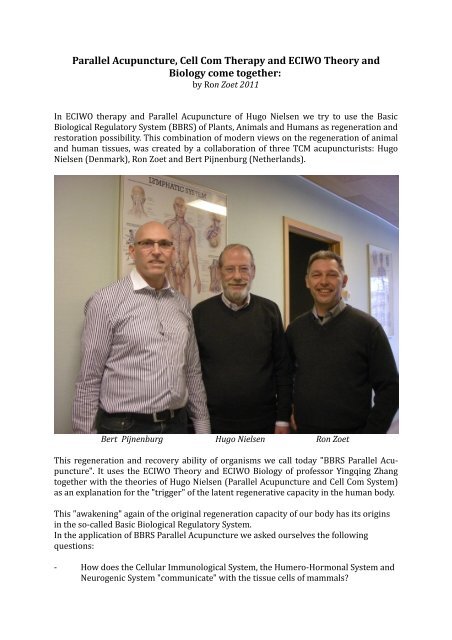 Parallel Acupuncture, Cell Com Therapy and ECIWO Theory andBiology come together:by Ron Zoet 2011In ECIWO therapy and Parallel Acupuncture of Hugo Nielsen we try to use the BasicBiological Regulatory System (BBRS) of Plants, Animals and Humans as regeneration andrestoration possibility. This combination of modern views on the regeneration of animaland human tissues, was created by a collaboration of three TCM acupuncturists: HugoNielsen (Denmark), Ron Zoet and Bert Pijnenburg (Netherlands).Bert Pijnenburg Hugo Nielsen Ron ZoetThis regeneration and recovery ability of organisms we call today "BBRS Parallel Acupuncture".It uses the ECIWO Theory and ECIWO Biology of professor Yingqing Zhangtogether with the theories of Hugo Nielsen (Parallel Acupuncture and Cell Com System)as an explanation for the "trigger" of the latent regenerative capacity in the human body.This "awakening" again of the original regeneration capacity of our body has its originsin the so-called Basic Biological Regulatory System.In the application of BBRS Parallel Acupuncture we asked ourselves the followingquestions:- How does the Cellular Immunological System, the Humero-Hormonal System andNeurogenic System "communicate" with the tissue cells of mammals?

- What happens when these (bio) communications get upset?- Does this distortion of the (bio) communication lead to serious illnesses andsymptoms?This idea of disruption of the BBRS will be concrete:Hugo Nielsen, Ron Zoet and Bert Pijnenburg wondered at what extent theycan "objectify disease".How does the body react on an attack of illness?Also, they wondered how such information from the immune system, which defends thebody, is transported.Both Hugo Nielsen, Ron Zoet and Bert Pijnenburg assumed that all the gatheredinformation by the Cellular Immunological system,Humero-Hormonal System and Neurogenic System about the situation in the body, isbeing stored in a "memory system".All previously acquired responses to this BBRS diseases and complaints, in the course ofevolution, are stored in the genes. This genetic information is recorded in the cellnucleus.These survival systems are always, if necessary, immediately accessible.In answering these questions Hugo Nielsen, Ron Zoet and Bert Pijnenburg noticed thatthe fundamental information (BBRS communication) of all cells in both plants, animalsand humans, are a form of "protein communication".- The information in the cells are transported via proteins;- The relevant information is stored in the nucleus.The genome as a "carrier of all genetic information" (in TCM: essence or yuan qi) canonly be expressed via protein communication.This can be stated as follows:The nucleus functions as a library, where all information is stored in the organism. Thisinformation is always on call, and copies can be made.The book in which this desired information is stored, can never been taken out of thelibrary building (the nucleus). Only in the form of copies (DNA replication, mRNA), thisinformation becomes available. This basic principle applies to plants and animals butspecifically for humans.In mammals, this communication goes from the nucleus, through the protein, into theblood.The nucleus with the stored information communicate with the blood via proteins.Another clue for matching with the BBRS.From this result it is that the symptoms of a disease will always be expressed from therecorded information of a genome. The genome determined the structure of the cellularproteins and the development of humoral proteins. A deviation in the composition of thetwo protein fractions or in one protein fraction defines the expected symptom.

From this we conclude that:- all of the standard deviated proteins, captures the pathology;- All clinical indications are based on humoral and cellular data(proteins);- Genome Cellular proteome Humoral proteome SymptomHugo Nielsen, Ron Zoet and Bert Pijnenburg thus indicate that:1. The humoral and cellular data (proteins) record the pathology;2. A force which get the proteins back into the right track (health),provides an opportunity for regeneration;3. We need to look for opportunities, which can interact in the genome(and thus in the BBRS).When looking for some opportunities in the TCM, which can produce these forces towork on the genome, Ron Zoet and Bert Pijnenburg investigated the options for ECIWOacupuncture (an Embryo Containing the Information of the Whole Organism) andECIWO differentiation promoters (phytohormones in the phyto-embryotherapy includingecdysterone, auxins and gibberellins) in the Netherlands and Belgium and HugoNielsen in Denmark examined and treated several thousand patients by his discoveredParallel Acupuncture and Cell Com System (a system for improving cell communication).The obtained particular experiences of the pioneers of these systems, gave them the ideathat it is possible to influence the central control unit of the body (BBRS) directly, whichcan specific be influenced by ECIWO acupuncture and ECIWO differentiation promoters(promoters of cell development) and the Parallel Acupuncture of Hugo Nielsen.This all led in 2010 to a partnership in the form of the Expert group BBRS Parallel Acupuncture,in which the Parallel Acupuncture Hugo Nielsen was linked to the ECIWO therapy.The BBRS Expert Group has already get a lot of positive experiences in treating various,poorly reactive, complaints and diseases by BBRS Parallel Acupuncture and the use ofECIWO differentiation promoters.Meanwhile, regarding the (BBRS) Parallel Acupuncture, there is made a lot of experiencefor about 30 years in clinical practice, based on a scientific evidence and confirmed byblood tests, X-rays, MRI’s and muscle biopsies from the hospitals.It works so well that the Hugo Nielsen Institute in Gram, Denmark, now almost onlytreats cancer patients. Therefore, other symptoms and diseases respond also spectacularon BBRS Parallel Acupuncture treatment and Cell Com treatment. ECIWO Acupunctureappears to combine perfectly with BBRS Parallel Acupuncture in therapeutic practice.Also, diagnostic changes before and after treatment, could be made visible with theECIWOgraaf.Regarding the ECIWO differentiation promoters we can state the following.Assumed that plants are communicating through the protein, then one looks at thatspecific plant part, in which genetic information is stored:the division active cells and especially the young buds.Division active cell groups include the entire (copied) genetic program of the originalmother plant.They contain substances as auxins and gibberellins. These substances have a

tremendous potential for growth and development (differentiation and specialization),but also a very high probability that the multiplicity of cell division could give problems.To defend themselves against these potential problems with the dividing cells, theembryonic plant organism uses some specific phytoproteins.When using differentiation promoters we assume the fact that each young but containsthe complete data of the entire motherplant (ECIWO theory).From this young but information (embryonic tissue) occurs in the course of growthdevelopment, tenfold in plant tissue.These young buts are rich in:- Proteins;- Enzymes;- Growth hormones;- Embryonic protein components.Embryonic tissue increases steadily, is rich in plant growth factors as auxins andgibberellins and affects the Basic Biological Regulatory System (BBRS).Gibberellins are rich in young germinating, growing tissues and young seeds, springingparts and apical root parts. It is for certain that the gibberellin content correlates withthe (rapid) growth of plant tissues. These phytoproteins have similar attributes to thetumor markers in mammals. In the ideal case, a tumor marker could be a sign of aspecific cancer. It seems that this also plays a role in plant tissues. It gives a substancethat will mark different parts, on which the plant's own repair (regeneration) system isactivated.By applying BBRS Parallel Acupuncture, ECIWO Acupuncture and the use of ECIWOdifferentiation promoters, the deviations of the normal things will be marked andrepaired, and so will everything within the BBRS function again, according the originalplan.To use a computer model to indicate this: when a computer stuck in its software, then areset button or the keys Control-Alt-Delete (such as phyto proteins of embryonic plants)will boot the computer to regain it’s original state.REACTIONS OF THE BODY TO THREATSThe reactions of the body to health-threatening situations are settled in the the genome.This type of capturing information is the response of an organism to an external threatand will be recorded as a survival strategy in the course of its evolutionary origin.The correct reactions are therefore immediately available, making it to directly facedangerous, life threatening situations and no time will be lost.When there is a dangerous threat, the body will ask itself:- How do I reply with my protein reserve (albumin) on a certain attack?The BBRS Parallel Acupuncture and ECIWO differentiation promoters try by usingthe division active cell groups and protein information, the genome and it’s proteininformation, to influence the recovery or regeneration of the organism.Proteins can even communicate very well with each other.

That means: division active cell groups intervene very actively to the metabolism,including activities such as the capacity to regenerate tissues.During treatment with BBRS Parallel Acupuncture, often the "old" symptoms of "thepast", will often come back in a short and a milder degree and then leave the bodyforever.This phenomenon, described in "Herings law" is also well known in classicalhomeopathy. This new treatment is the parallel use of only 2 acupuncture needles tomanipulate the BBRS. To provide mechanical-physical and psychological effects, whattriggers the disease history accumulated in our lives and the in the memory systemimprinted medical history, it is very important to connect the acupuncture needlesparallel-symmetrical to each other.In all other cases there will be no effect on and from the Basic Biological RegulatorySystem.Research in the Hugo Nielsen Institute has shown that most of such diseases who aretreated with standard therapy (including the traditional acupuncture) persist in thebody, when the patient has apparently recovered. Actually, this patient is not completelycured of his symptoms or diseases, as these are often not completely disappeared anddeleted from the body.Through treatment with BBRS Parallel Acupuncture, Cell Com Therapy and ECIWOtherapy, the body get rid of the symptoms and illnesses from the body gradually and willpromote the regenerative capacity of the body.For more information, please visit the website of the Hugo Nielsen Institute:Website: www.hni.dkMore information about the BBRS can be downloaded from BBRS Science and Medicineat the above website, written by Ron Zoet 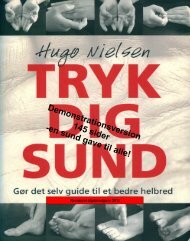 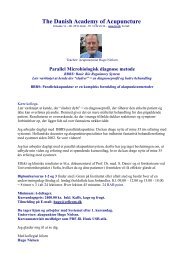 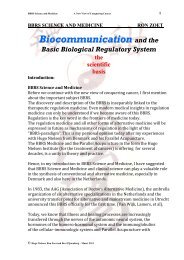 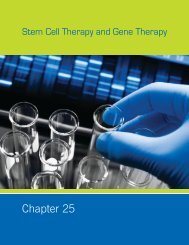 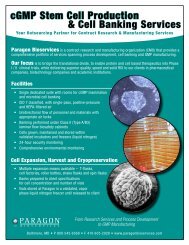 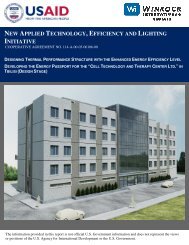