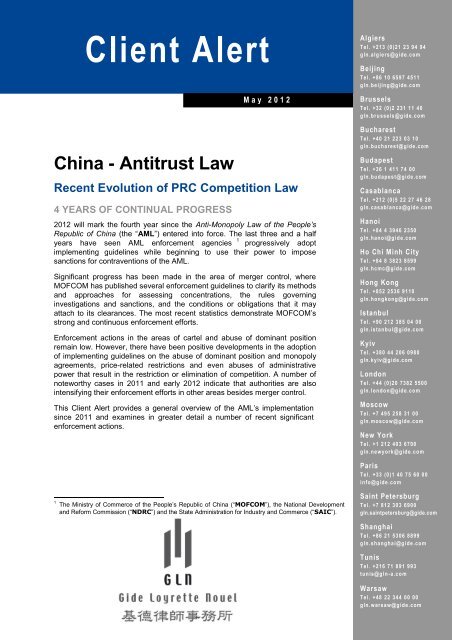 2.MERGER CONTROLKey statisticsIn the period from January to mid-December 2011, MOFCOM received 194 merger notifications, an increase of43% from 2010. Of the 160 closed cases, 151 were cleared without conditions (94%), four were grantedconditional approval (3%) and five were withdrawn (3%).The statistics clearly show that the Chinese merger control regime is becoming more and more effective. Thisbeing said, the majority of cases in 2011 went through Phase II review, indicating that the Chinese mergercontrol procedure remains time-consuming.Learning from MOFCOM’s past decisionsAs shown in the table below, MOFCOM has published 13 decisions to date 2 . Aside from one prohibition decision(namely, the Coca-Cola/Huiyuan case), there have been 12 conditional approval decisions in which theconcentration was cleared with divestiture or non-divestiture remedies.A brief look at MOFCOM’s decisional practice can help businesses better understand the approaches and logicin MOFCOM’s decision-making and thereby better anticipate and prepare future merger notifications in China.There are some interesting insights that may be drawn from MOFCOM’s most recent cases:• Pure offshore transactions are subject to Chinese antitrust filing if thresholds under the AML are met;• Even if the geographic market is worldwide in scope, MOFCOM is likely to look into the impact of thetransaction on the Chinese market;• The establishment of a joint venture company in principle is subject to merger control, but it is unclearwhether a distinction will be made between full-functional and non-full-functional JVs;• Overall, MOFCOM appears to be quite receptive to behavioural remedies, especially (but not exclusively) inaddressing vertical competition concerns;• Apart from competition concerns, MOFCOM also takes into account other considerations in terms of Chineseindustrial policies and national interests (e.g. as it transpired from the Uralkali/Silvinit case, MOFCOM’s mainconcern was the overall availability of the product concerned – potassium chloride, a key fertilizer for theagricultural sector – in China);• It is possible to include a review clause in MOFCOM’s decision, which allows the notifying party to apply toMOFCOM to waive the remedies after a certain period;• In reviewing parallel transactions in the same market (e.g. the Western Digital/Hitachi and Seagate/Samsungcases), MOFCOM will conduct its analysis as if neither transaction has taken place, irrespective of whichparty notifies first.A summary of MOFCOM’s published decisionsThe following table provides a summary of MOFCOM’s published merger decisions to date, and indicateswhether the proposed merger was prohibited or conditionally approved (with either divestiture or non divestitureremedies).2 The AML requires MOFCOM to publish all decisions that prohibit a transaction or approve a transaction with conditions.

3.Year Decisions Prohibited Divestiture RemediesNon - DivestitureRemedies2012Western Digital/Hitachi Henkel (HK)/Tiande ChemicalSeagate/Samsung2011General Electric/China ShenhuaAlphaV/SavioUralkali/Silvinit2010 Novartis/Alcon Panasonic/SanyoPfizer/Wyeth2009General Motor/DelphiMitsubishi Rayon /Lucite Coca-Cola/Huiyuan2008 Inbev/Anheuser-Busch ABUSE OF DOMINANCEOverall, there are few published cases in which companies were sanctioned for abusing their dominant position.However, 2011 is significant for the record amount in administrative fines imposed by the NDRC and the firstantitrust investigations into state-owned enterprises (“SOE”) in the history of AML implementation.A record amount in administrative fines imposedBy far the most notable case in the area of the abuse of dominant position was an NDRC decision, in late 2011,that imposed fines of approximately USD 1.07 million on two pharmaceutical companies, Shandong WeifangShuntong Medicine Co., Ltd. and Shandong Weifang Huaxin Medicine Trading Co., Ltd., for contraventions ofthe AML. The two companies had imposed price increases of 1.5 to six times after entering into exclusive supplyarrangements with the only two suppliers in China of feedstock for compound reserpine tablets, a hypertensionmedicine taken by millions of Chinese. This is the largest fine the NDRC has imposed for antitrust infringementssince the adoption of the AML in China.First investigations into SOEsAnother significant step forward was taken in November 2011 when the NDRC launched antitrust investigationsinto large SOEs – China Telecom and China Unicom – for the first time.The NDRC believes that the two giant telecommunication companies hold dominant market positions in theChinese broadband market and practised price discrimination by charging rivals higher prices than companiesthat were not competing with them. If the allegation of the abuse of a dominant position is established to be true,the two companies may be liable for fines of 1% to 10% of their respective revenues from the previous year,which could amount to billions of RMB.One particularly interesting facet of the NDRC’s announcement of these investigations was its recourse to thegeneral media, rather than a release of an official administrative notice. Such publicity created enormouspressure on China Telecom and China Unicom, which offered commitments to expanding their accessibility,reducing Internet prices and improving connection speeds just after the NDRC’s announcement. According tothe AML and relevant implementing guidelines 3 , a party under scrutiny may apply for the termination of aninvestigation if it commits to taking measures that will eliminate the effects of its suspected anticompetitiveconduct within a given time limit.3 The Provisions on the Administrative Procedures for Law Enforcement against Anti-Competitive Conduct on Price promulgated by theNDRC on 29 December 2010.

5.customer restrictions, exclusive distribution and tying. In the absence of any guidelines or case law, it is stillunclear whether (and to what extent) non-price vertical restraints could be considered a non-exemptible,hardcore restriction under the AML.Another area of uncertainty is the rule on leniency, which encourages a party to a cartel to denounce otherparties to authorities in exchange for an exoneration of its liability or a lighter penalty. Although both the NDRCand SAIC adopted implementing guidelines in 2011 that provide a legal basis for authorities to implement theleniency policy, it is still unclear whether leniency will be automatically granted to companies if they meet theprescribed conditions or whether authorities retain discretion on granting leniency.It is hoped that clarity on these issues, among others, will be provided in 2012, and that significant progress willcontinue in relation to the competition law regime in China. This Client Alert was prepared by our China Antitrust Working Group - a cross-border group focusing on Antitrust Lawissues and developments affecting foreign direct investment in China and Chinese outbound investment. For furtherinformation, please contact one of our experts below.BeijingSuite 3501, Jing Guang CentreHu Jia Lou, Chaoyang DistrictBeijing 100020 - ChinaTel. +86 10 6597 4511ContactsThomas Urlacherurlacher@gide.comLi Huali.hua@gide.comZheng Yuzheng@gide.comShanghaiSuite 2008, Shui-On Plaza333 Huai Hai Zhong RoadShanghai 200021 - ChinaTel. +86 21 5306 8899ContactAntoine de la Gatinaisgatinais@gide.comHong KongSuites 1517-1519, Jardine House1 Connaught PlaceCentral, Hong Kong SARTel. +852 2536 9110ContactRebecca Sillisilli@gide.comBalbir Bindrabindra@gide.comSamuel Chauchau@gide.comColin Mercermercer@gide.comParis26, cours Albert 1 er75008 Paris - FranceTel. +33 (0)1 40 75 60 00ContactsCharles-Henri Legerleger@gide.comGuillaume Rougier-Brierrerougier@gide.comStéphane Vernayvernay@gide.comDavid Boitoutboitout@gide.comYou can also find this Client Alert and our other newsletters on our website in the News/Publications section.This Client Alert is a free, periodical electronic publication edited by the law firm Gide Loyrette Nouel (the "Law Firm"), and published for Gide Loyrette Nouel’s clients and business associates. TheClient Alert is strictly limited to personal use by its addressees and is intended to provide non-exhaustive, general legal information. The Client Alert is not intended to be and should not beconstrued as providing legal advice. The addressee is solely liable for any use of the information contained herein and the Law Firm shall not be held responsible for any damages, direct, indirector otherwise, arising from the use of the information by the addressee. In accordance with the French Data Protection Act, you may request access to, rectification of, or deletion of your personaldata processed by our Communications Department (privacy@gide.com).