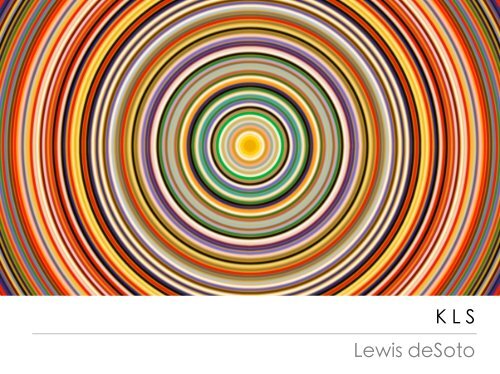 KLS represents a conversation, a relay of sorts, between three artists: the American Lewis deSoto,noted for his singular talent for colliding media; the German Hermann Hesse, author of classics likeSiddharta, Steppenwolf, and The Glass Bead Game; and the fictional Klingsor, hero of Hesse's 1919novella, Klingsor's Last Summer. These are our players: deSoto, Hesse, and Klingsor. The relay, then,takes place as follows: deSoto sampling Hesse writing Klingsor painting Montagnola. TakingMontagnola as a center point and working our way outward, from Klingsor to Hesse to deSoto, aconcentric spiral of inspiration and artistic engagement emerges to which KLS provides a satisfyingvisual counterpart.We begin in 1919, in the village of Montagnola, part of the the Italian-speaking canton of Ticino insouthern Switzerland. Here a middle-aged painter named Klingsor drinks the heady wine of his lastdays, feverishly painting his natural surroundings and ultimately composing one final masterpiece, aself-portrait, before his death. Klingsor's story is told in seven chapters; despite their linearsuccession from page to page, their sense of time is more cyclical than linear. Even Klingsor's deathis confirmed as an event not in the final chapter, but early in the preface: in a typically masterfulHesse gambit, we begin with Klingsor's end. The novella proceeds, not as a straightforward narrative,but as a symphony of vibrant sensations ranging from the ecstatic to the terrible. The readerexperiences a series of impressions from moment to moment which collapse time to reveal a manceaselessly cycling, passing through a series of interior zones. Within each of these zones existintense, often contradictory forces presented not as binary opposites, but as a range of values in aparticular spectrum. One spectrum ranges from darkest melancholy to intoxicated ecstasy; anotherbetween animal corporeality and more abstract spiritual or artistic constructs; still another from the3

KLS Bookancient anchor of history to the spontaneous, mobile potential of the present.Klingsor wanders the valleys, villages and mountain paths of Ticino, bathed in summer lightas he paints, loves and ruminates. Timeless, universal themes are investigated with asavage spiritual thirst and a keen sensitivity. Here, Klingsor celebrates the way that the olddrink youth in like wine, drawing warmth and comfort from its electric beauty. There, hemarvels at the possibility of "visiting three continents in a single day" by finding in hiscompatriots and surroundings the Other which one seeks with travel: the "primeval forest,heat, beautiful alien people without nerves, sunlight, [and] temples" of Africa, India orJapan, all there in his own Swiss meadows and palazzos. Mortality is a constant concern; ofall his interior zones, the spectrum of life and death is revisited with the greatest frequency.Klingsor wrestles with the impermanence of art, expression, of his own body and its matricesof desire. At times he sees Death embodied as a shadow, a figure at his table as he drinkswith friends. Elsewhere, he finds in his own relentless artistic output a "cannon" with whichto defend against an inevitable end: "I have also shot at death with paints," declares aproud, fearful, drunken Klingsor, "with fiery green and explosive vermilion and sweet scarletlake. Often I have hit him on the head; I have driven white and blue into his eye."5

KLS BookKlingsor is, of course, not Klingsor but a fictional avatar of his author: Klingsor is Hessewriting-Klingsor,Hesse himself shooting at death with ideas, words and paint. As arebellious youth, Hesse escaped from a series of religious institutions and schools, finallyfinding his path as an apprentice in a bookstore. Beginning with a volume of Romantic lyricpoetry, the teenage Hesse began to synthesize his long hours of intellectual inquiry into abody of written work all his own. He read volumes, exploring Schiller, Goethe, theologicaltexts and Greek mythology, wandering to Sri Lanka and Indonesia in search of Buddhismand Eastern spiritual traditions, seeking psychological insight from contemporaries of Jung.Indifferent to any received notions of the incompatibility of Western and Eastern ideas,Hesse sought in his own writing to confront the universal, to see the cosmic flux betweenidealism and reality, between the monolithic stasis of culture and the evanescent brillianceof the individual.Troubled by the horrors of the Great War and a collapsing marriage to an increasinglypsychotic wife, Hesse sought refuge in 1919 in a rented house in Montagnola, whereKlingsor was written over the course of a single summer. Hesse cultivated friendships withpainters, like Louis Moilliet, a friend of Klee and Kandinsky who appears in Klingsor asLouis the Cruel. Not coincidentally, he also spent much of his time in Ticino painting thesouthern landscape. While he modestly dismissed his own work as that of a mere dilettante,Hesse’s dexterous handling in Klingsor of the painter's jargon of cadmiums, cobalts and8

KLS Bookvermilions was the result of applied study: at the time of the author's death, in addition tohis literary accomplishments, he had composed more than 3,000 watercolors. Nevertheless,there is something astonishing in the way the colors have been written into Klingsor, andconsequently in the way the reader's eye picks up the colors from the page, that hispaintings simply cannot match. Using only words -- an array of standardized letters printedin black on a white page -- Hesse's prose evokes a "farberkonzert," a symphony of colors.The singing, radiant beauty of Hesse's descriptions derives much of its intensity from anunrivalled palette.Reso Karalashvili has written that what Hesse achieved as a colorist in Klingsor “goesbeyond all possible limits.” No doubt this boldness with regard to a medium's perceivedboundaries was enormously appealing to Lewis deSoto. What a profoundly sympatheticnote must have resonated in deSoto's being as he encountered Hesse and Klingsor for thefirst time! Even at the surface, deSoto and Hesse have more than a little in common: bothunderwent an influential religious education; both possess a thirst for knowledge matchedwith a wandering spirit. Moreover, deSoto has made a career of exploding the limits of amedium, as in his practice of combining printed words and photographs to find hiddenintersections of meaning. In 1985's Kachina, for example deSoto finds in the shape of anelectric tower the form of a native totem, reminiscent of Klingsor's discovery of an unlikely10 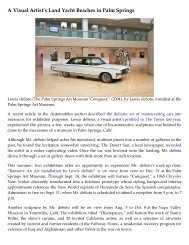 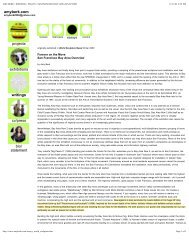 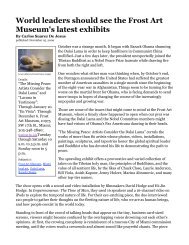 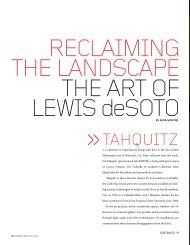 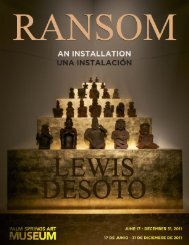 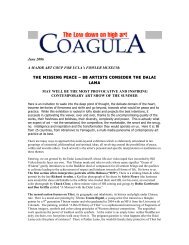 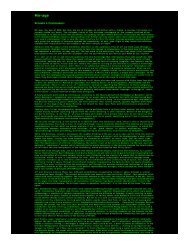 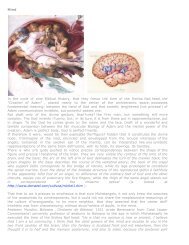