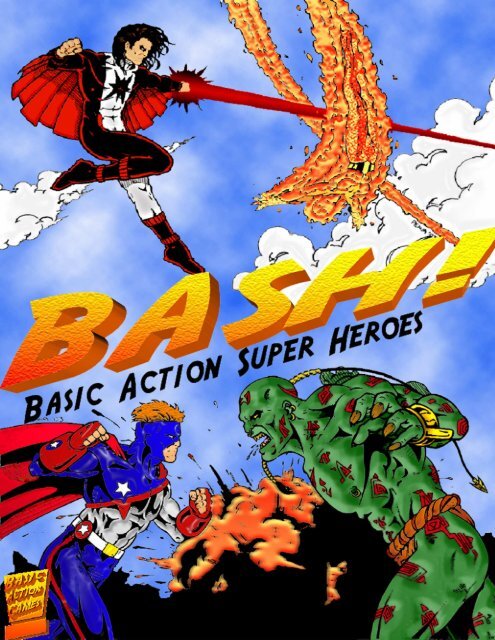 Basic Action Super Heroes Role Playing SystemIntroduction: A Super Heroic RPG For Basically Anyone!The BASH! System was a product of my attempt to invent a role-playing game that would appeal to kids. What I found,however, was that it really worked well as an RPG for gamers of all ages. The rules are light and simple, yet expansiveand precise. Most superhero rpgs are either too bogged down with details (describing every imaginable attack as aunique, separate power), or far too simplistic (telling players to just “make up their own powers and let the GM decidehow many points it should be worth”. We know how that often goes…). BASH gives a complete list of powers withoutrequiring the players to learn complicated formulas or memorize charts. In short, you will spend less time creating yourhero, and more time playing your hero.The way that the system works is that the players roll 2 standard six-sided dice, and multiply the result by their stat orpower to indicate the result relative to their opponent’s or the difficulty of an unopposed task. If the roll is “doubles”,roll another die and add it (repeat if it matches) before you multiply. The higher number is victorious. Simple, eh?Key TermsPage- One round of combat is known as a “page”.On each page, there are several “panels” that takeplace.Panel- During a “page”, each character takes anaction, known as a panel. Panels are numbered accordingto the combatants’ priorityPriority- The order in which heroes’ and theiradversaries’ “panels” occur. This is based on whomeverhas the highest Agility, and is affected by super speed.Issue- The current game session, within an ongoingplot known as a story arc.Story Arc- The ultimate goal of the heroes overa given time. Once that goal is achieved, players maymove on to another story arc.Stats- These are the fundamental raw aptitudes ofany character. They are Brawn, Agility, and Mind. Seecharacter creation step 1 for more details.D6- An ordinary six-sided die. In this game, you oftenhave to roll two at once.DM, Damage Multiplier- The number bywhich 2d6 are multiplied to determine how much damagean attack does, how much damage is soaked, or howmuch damage is healed.Hits-This is how much physical damage yourcharacter can withstand before being knocked out.Heroes usually begin with 100 hits. Minions have less.Doubles- When both d6s display the samenumber. If this happens, roll another d6 and add it. Ifthis also matches, roll and add until it doesn’t.Soak- The number by which 2d6 are multiplied toreduce the number of damage hits taken from a givenattack/accident. This is based on Brawn, andreinforced by the special protection power.Active Multiplier- The number by which anyaction is multiplied other than damage. The maximumactive multiplier is x10.E.C. Stands for: Energy Cost. When writing down acharacter’s information, you should write down the E.C.next to the power if it is not simply equal to the pointcost of the power.2

•Gadget- A gadget is an item that you must use to make your powers work. Every gadget has some shortcoming. Choosefrom the following:1. Easily Taken (it is something that is not attached to you, that anyone can pick up and use)2. Fragile (It has 10 Hits per point of cost, and x1 Damage soaking per point of cost)3. Ammunition- It uses no energy, but can run out of uses. Each time it is used, roll 1d6. If the number is equal to orless than the power’s point cost, put a check mark next to the power. When the power gets 3 check marks beside it, itis no longer usable for the rest of the issue or for the rest of the day in game time, whichever comes first.•Only works in certain situation; either when conditions have been met (motions and gestures for spellcasting, forinstance) or at a certain time or place (i.e. powers that only work at night, etc).•Does not work under certain conditions: underwater, on anything yellow, etc.Power Enhancements. For 1 extra point, a power can be given an extra advantage:•Can affect others (if normally unable to do so). If the subject is unwilling, you must make an attack roll against themto use the power.•Can affect you (if normally unable).•Reduced Energy Cost: Every point you put in this enhancement lowers the energy cost to use that power by 1 point.You can reduce energy cost to zero.•Multi-Power: You can add another power to this one, of equal or less point value (excluding the point for thisenhancement). These two powers cannot be used simultaneously, and you pay the energy cost for the entire multipowerwhenever you use either one. Any power enhancements must be added to the individual power, any limitationsaffect all powers in the multi-power. If the two powers are not in the same classification, this enhancement costs 2points, not one. Example: for 4 points, a character could have a multi-power including 3 points of flight and 3 points ofsuper running. If the character uses either one, he must spend 4 energy to do so, not 3. If he wanted a multi-powerincluding 3 points of flight and 3 points of invisibility, this would cost 5 points (they are in different categories) and 5energy each time it was used.•Variable: Instead of buying this power with a specified range, radius, or intensity, you have a pool of points to utilizethis power, and determine these variables each time you use it. For instance, a 3pt attack power could grant a +1 DMradius 2 attack, or it could be a +3 DM attack or a +2 DM attack with a 5 square range. Any combination is possible.Weakness: You do not have to have one, but it is very common for heroes (and villains) to have a weakness, a fatalflaw that makes them vulnerable despite their mighty powers. If you have a weakness, you get an extra point in stats,or an extra 2 points in powers (your choice). In BASH there are 2 varieties of weakness. First, there is the negatingweakness. Whenever you are within 5 squares of your weakness, or you go 1 day without the source of your powers, youloose all of your powers, and your Brawn and Agility are reduced to 1 each. In essence, you have become a normalperson, and extremely vulnerable to attack. The other variety of weakness is the damaging weakness. A damagingweakness is a specific type of attack that does double damage to you (before rolling to soak). A character might have adamaging weakness against electricity, heat, cold, magic, blades, or anything else you can think of and the narratorapproves.Devastating Weakness: This is an even more debilitating effect than a standard weakness. If you have adevastating weakness, you get either 2 extra points in stats, 4 extra points in powers, or 1 in stats and 2 in powers. Ifyou have a devastating weakness choose one of the following effects: 1. You have three standard weaknesses. 2. Youtake quadruple damage from a given type of attack. 3. You have a negating weakness that in addition to loosing statsand powers as above, also causes you to take x3damage each page whenever you are within 5squares of the substance or without the source ofyour powers!Types of Powers:Movement Powers (OnlyAffect You)Clinging: 1 Pt. You can stick to and climbwalls like a spider. This uses no energy.Flight: 1-5 pts. You can fly at Agility x flightper panel. You can choose to fly slower to use lessenergy. You only spend energy when you take off,

ut cannot rest off this lost energy until you land, limiting your pool for other powers while flying..Gliding- 1 pt. You can move at Agility x 4 per panel, but only when descending from a height. The distance you canglide is equal to 4x the height you jumped from. Also, you take only ½ damage from falling. This power uses no energy.Hovering- 2pts. You are able to hover about 3 feet above the ground at all times. You move at Agility x5 perpanel. This power costs no energy to use.Running: Running power costs 1-5 points. Each point increases the number your Agility is multiplied by to figurehow fast you move per panel. Normally it is 3 squares per point of Agility per panel, but each point increases themultiplier by 1. Thus a 2 in running lets you move 5 squares per point of Agility each panel. If you attack with a runningstart, you can add 1 to DM You can choose to run slower to use less energy.Super Speed and Priority: Acharacter’s extra panels occur overthe course of the page. The firstpanel occurs on Agility+4/2 (if SuperSpeed is 4 or 2 accordingly). Thesecond panel occurs on Agility+2/0(if Super Speed is 4 or 2accordingly). If there is a thirdpanel, it occurs on Agility as normal.Super Speed: 2 or 4 pts. You are able to move faster than even otherheroes. They just seem to be going in slow motion to you. When you use thispower, you can have more than one panel in the page. The 2-point power allowsyou to take 1 extra panel, while the 4 point power allows you to take 2 extrapanels. Remember, this costs energy to use. Alternatively, you can use thispower to add the number of points invested in it to your Agility when attemptingto hit or dodge an opponent, instead of receiving extra panels. One of yourspeedy panels cannot be resting! A character with 4 points of super speed maychoose to act as if he only had 2 points in order to use less energy.Super Jump: 2 pts. You can jump 10 times the normal distance (Brawn^2) in a single leap, half of which can bevertical movement. A jumping character covers 10 squares of distance per panel in mid air. (Thus, the a character with5 Brawn can stay airborne a long time). A melee jump attack made using this power does 1 extra DMSuper Swimming 1-5pts. Normally, a characterand other unstable surfaces.can swim Brawn squares per panel. A character withsuper swimming multiplies this number by 1+# of points inSuper Swimming. Also, you can hold your breath thatmuch longer than a regular person. So a 2 SuperSwimming lets you swim/hold your breath 3 times longerthan normal. You can choose to swim slower and use lessenergy.Swinging: 2 pts. You can websling (or use grappler,etc) like a certain wall-crawler. You move at 4 x Agility.Teleportation: 5 pts. You can disappear andreappear to somewhere you can see within 100 squares.Water Walking: 1 pt. You can walk on waterTop Speed for Super Movement Powers- Your maximum speed is 10mph times your maximum squares/panel. The time ittakes to get up to top speed is 1 minute/100 miles per hour. You cannot move this fast in combat. It takes time to get up tospeed, so you cannot start to move this fast until you are well out of combat. You cannot do any evasive maneuvers- onlymove in a relatively straight line, as you would flying a direct course or staying on the freeway.Combat PowersArmor: 1-3 points. (Only affects you) You have a power that reduces damage by increasing Brawn to soak damageby 1 for each point in the power. This power costs no energy to use.Attack Weak Point-2pts, plus points for range, radius, etc- You must make your attack roll by 20 or yourattack misses. If you succeed, your damage roll does double damage. This is a common ability of thieves and assassinswho strike from behind or for heroes to take down gigantic foes with precision strikes.Continual Damage- This power works much like the special attack power regarding range and radius, withone dramatic difference. The damage multiplier for this power is not based on any attribute, but the power alone. Ifthe attack hits, the target can roll to soak the damage. If the damage is soaked, there is no effect. If the charactertakes one or more hits of damage however, the character must roll to soak again the next page, until the targetsuccessfully soaks the damage (damage is re-rolled every page as well). If the target successfully soaks the damage,the attack ceases. This attack might represent poison, acid, combustion, choking, or various other attacks that woulddo damage over time, rather than a single strike. 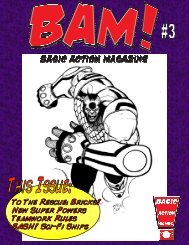 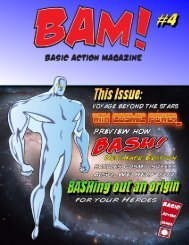 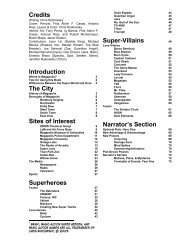 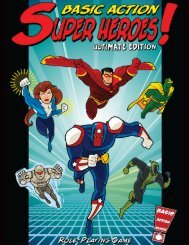 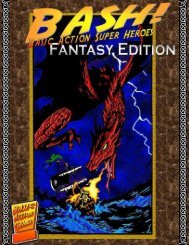 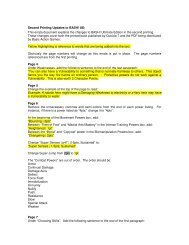 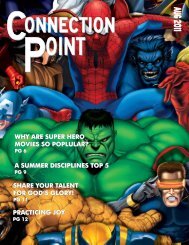 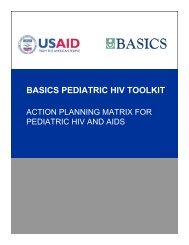 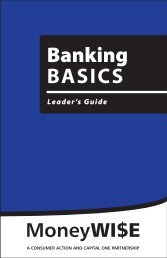 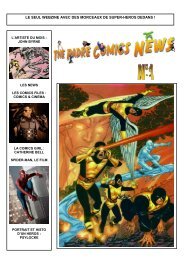