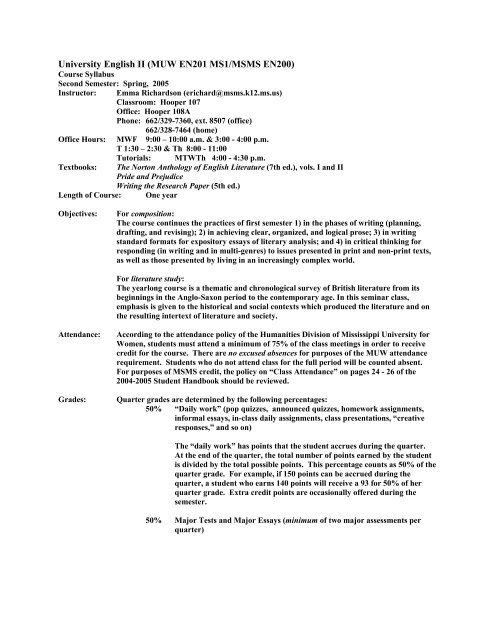 DUE DATES FOR ASSIGNMENTS&POP QUIZZESWritten assignments are due at the beginning of the scheduled class period the day they are due.Assignments will be accepted late one class date after the assignment is due for a 15%penalty. Assignments offered later than one class day late will be accepted at the discretionof the instructor for no more than half-credit.Students should write “-15%” at the top of the paper when offering it one-day late to theinstructor.Students who do not turn in work with the rest of the class will not receive reminders to turn it inlater; the burden is on the student to offer late work to the teacher. Students returning to classafter absences should check the Student Handbook for the policy regarding make-up work.Please be aware that absence from class does not excuse you from fully participating in class theday of your return. For example, if a quiz (whether a pop quiz or an announced quiz) is giventhe day of your return, you are required to take it, even if you were not in class to hear anassignment or to take notes. Always check with a reliable classmate regarding what went on inclass the day you were absent. You may call me at my home (328-7464) for clarification, ifnecessary.Pop quizzes will be given often on reading assignments; questions will come from facts in theworks, from the biographical introductions to the authors, from vocabulary from the readings,and from information presented in class (and which should be in the student’s notes!). Alwaysconsult the syllabus for daily readings. Regardless of what we cover in class discussions orpresentations, always read the syllabus assignment for the class dates indicated. If a readingassignment was not discussed during class, review it for the next class period; you may have apop quiz!Pop quizzes usually consist of four to ten questions; “announced” quizzes are generally longer.

RUBRIC FOR ASSESSMENT OF ESSAYS OF LITERARYANALYSIS AND THE RESEARCH PAPERAA clearly delineated idea is presented by a thesis elaborated into a three-pointenunciation; the discussion is full, and ideas are sustained for a thoroughpresentation of the thesis; the response exhibits a maturity of mind and expressionby being incisive, focused, responsibly addressed, and containing manyappropriate, persuasive textual references (especially many quotations); theresponse will often contain a unique, original insight from the student’sinteraction with the text. For the research paper, at least 4-5 secondary sourcesare used effectively to support the thesis.BAn idea is presented in a thesis elaborated into a three-point enunciation; anattempt is made to offer a sustained discussion; the paper meets the minimumlength requirements; the response is focused and responsibly addressed andcontains a few appropriate textual references (especially quotations); the responseshows that the student has read the text and can utilize it to prove a thesis. For theresearch paper, at least 4-5 secondary sources are used effectively to support thethesis.CAn idea is stated weakly in a thesis which may or may not be elaborated orenunciated; some discussion which supports the thesis is present, but thediscussion is superficial; the paper might be less than the minimum requiredlength; the response is unfocused with few or no textual references (especiallyquotations); the response does not show that the student has done a close readingof the text. For the research paper, some secondary source references are used tosupport the thesis, but they are too few and/or too ineffective.NCSome attempt has been made to respond to the prompt, but discussion issuperficial and brief; the response is unfocused; the writing exhibits little or notattempt at organization with a delineated thesis; the response contains nosignificant evidence of the student’s familiarity with the text. Few valid oreffective secondary references are used to support the thesis.If otherwise effective content is undermined by mechanics/usage errors, at least onerubric designation will be lost. For the research paper there must be adherence torequirements of MLA style; if MLA style is inaccurate, at least one rubricdesignation will be lost.