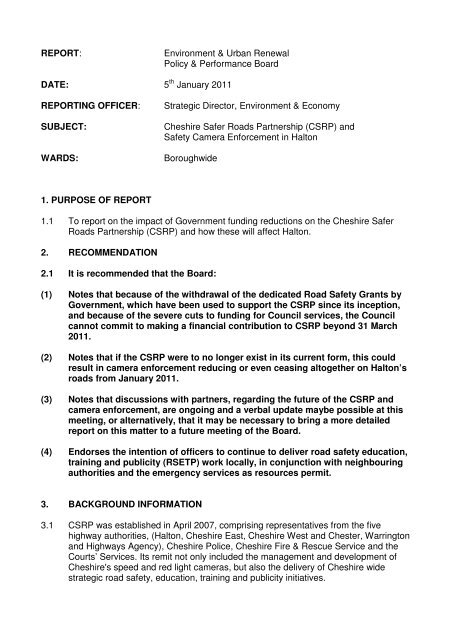 REPORT:Environment & Urban RenewalPolicy & Performance BoardDATE: 5 th January 2011REPORTING OFFICER:SUBJECT:WARDS:Strategic Director, Environment & EconomyCheshire Safer Roads Partnership (CSRP) andSafety Camera Enforcement in HaltonBoroughwide1. PURPOSE OF REPORT1.1 To report on the impact of Government funding reductions on the Cheshire SaferRoads Partnership (CSRP) and how these will affect Halton.2. RECOMMENDATION2.1 It is recommended that the Board:(1) Notes that because of the withdrawal of the dedicated Road Safety Grants byGovernment, which have been used to support the CSRP since its inception,and because of the severe cuts to funding for Council services, the Councilcannot commit to making a financial contribution to CSRP beyond 31 March2011.(2) Notes that if the CSRP were to no longer exist in its current form, this couldresult in camera enforcement reducing or even ceasing altogether on Halton’sroads from January 2011.(3) Notes that discussions with partners, regarding the future of the CSRP andcamera enforcement, are ongoing and a verbal update maybe possible at thismeeting, or alternatively, that it may be necessary to bring a more detailedreport on this matter to a future meeting of the Board.(4) Endorses the intention of officers to continue to deliver road safety education,training and publicity (RSETP) work locally, in conjunction with neighbouringauthorities and the emergency services as resources permit.3. BACKGROUND INFORMATION3.1 CSRP was established in April 2007, comprising representatives from the fivehighway authorities, (Halton, Cheshire East, Cheshire West and Chester, Warringtonand Highways Agency), Cheshire Police, Cheshire Fire & Rescue Service and theCourts’ Services. Its remit not only included the management and development ofCheshire's speed and red light cameras, but also the delivery of Cheshire widestrategic road safety, education, training and publicity initiatives.

is not considered prudent for this Council to commit limited funding to an externalpartnership without determining local priorities in the first instance.3.5 Whilst the other partner local authorities are also faced with budget reductions theyare not as severe as Halton’s in overall percentage terms. Discussions are thereforeongoing between officers and Members of the CSRP Board as to whether the CSRPcan continue and if so in what form. Options being explored include, for example, thepotential for providing a service if 30% of current funding levels were provided.However, preliminary indications are that at these levels a very much reducedservice would be provided with, in all probability, those contributing the most gettingthe lion’s share. At the time of writing only Cheshire West and Chester, andWarrington have indicated any preparedness to consider a 30% contribution but thisis without the benefit of any detailed analysis of what would actually be available forthat amount.3.6 Officers are now carrying out a full review of the costs and benefits of CSRP toHalton and camera enforcement in particular, with a view to informing Members howroad safety in Halton can be taken forward. This will include the potential forcontinuing partnership working. This could form the basis of a future report to thisBoard. What the Board should recognise is that very significant reductions in roadcasualties were under way before the CSRP was formed and this trend hascontinued across the borough. Indeed, our general killed/seriously injured numbersover the whole of Halton have fallen at a faster rate than at all but one of the fourremaining camera sites that still have any accident history.4.0 FUTURE DELIVERY OF RSETP WORK4.1 Not subscribing financially to CSRP would bring a more local focus to RSETPactivities and free our remaining staff to concentrate on purely Halton issues, withwork that is guided by local accident/casualty analysis as was the case before theRSG supported CSRP was created. Through Road Safety Great Britain and regionalcontacts we will continue to remain abreast of current issues and developing trendsand we will work with our neighbours on areas of common interest.4.2 Cheshire Police, as main beneficiaries of CSRP funding distribution, have indicatedthat safety cameras will be switched off in Halton on 1 January 2011 if this Council isunable to replace the lost RSG contributions. However, the Police should, in theory,still be required to carry out speed limit enforcement. Any surplus from speedawareness courses they may be able to sustain should provide them with an incomestream to support speed enforcement. However, that would be a matter for the ChiefConstable to determine. They are also obliged to continue supplying accident data.5.0 FINANCIAL & OTHER IMPLICATIONS5.1 There are no direct policy, social inclusion, sustainability, best value, legal or crimeand disorder implications resulting from this report.6.0 IMPLICATIONS FOR THE COUNCIL’S PRIORITIES.6.1 Children & Young People in HaltonThere are no direct implications on the Council’s ‘Children and Young People inHalton’ priority.