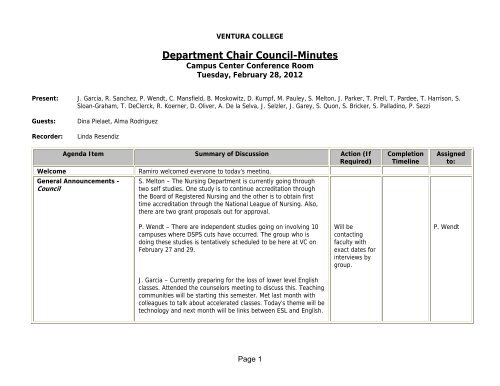 Agenda Item Summary of Discussion Action (IfRequired)General Announcements –Council (continued)T. Prell – Sumita Lall and himself have been given the task to puttogether mandatory flex day activities addressing basic skills otherthan English and math. We would like input from any faculty whocurrently have ideas they would like to share.S. Bricker – Fall degrees have been finalized and students havebeen notified. Letters have been sent to students who do notqualify for graduation. Susan mentioned that the largest numberof denials is for not meeting the math competency.P. Sezzi – The Senate agenda has been sent out for thisThursday’s meeting. The meeting will be on General Ed SLOs andaccreditation updates.J. Garey – The Performing Arts program is doing well. The operacomedy musical is coming up in 2 weeks. After that will be the 39Steps show in April. The Theatre Arts department is lookingforward to moving to the renovated theatre.S. Quon – Steve said he’s currently involved with helping theequivalency committee at the district. He’s also helping out acouple of students trying to get into some programs at Princetonand Stanford.T. Pardee – Currently involved with the Tegrity pilot. He wasasked by Kathy Scott to help with the Title 5 grant for next year.Working on getting proper ventilation in the cadaver room. He’salso working with the Equivalency Committee at the district office.His department is in the process of electing a new departmentchair.R. Koerner – We are having the 3 rd Annual Wellness Week fromApril 9-13. The Holistic Health Festival will be on Thursday April12. The men’s and women’s basketball playoff games are thisWednesday.Contact Sumitaor Ted withany ideas.CompletionTimelineAssignedto:CouncilPage 2

Agenda Item Summary of Discussion Action (IfRequired)General Announcements –Council (continued)C. Mansfield – Casey mentioned that there’s a nesting ofhummingbirds by the AG area. He said that in a week or two theywill be hatching. He said it would be nice to have a videocapturing placed there.B. Moskowitz – The art faculty show opened last Thursday inGallery 2 and Media Gallery. Bob attended the artist conferenceassociation last week. His department is currently looking for anart replacement.D. Kumpf – The Math Department is facing the loss of lower levelmath classes. We are trying to determine what to do with thosestudents. His department has developed two new intermediatemath courses, Math 13A and Math 13B. They would be offered intwo semesters. The department los the grant funded modularmath classes.J. Parker – Jennifer mentioned that Governor Brown wants torealign the child development program to childcare. She said thatthe state has been awarded $52 million by the federalgovernment. 16 counties were awarded money and VenturaCounty is one of them. She said that we’ll be partnering with thedepartment of education for lab schools.M. Pauley – He mentioned that instructional effectiveness groupsare still going on. He said that his department is participating inpilot program level SLOs. The THINK event will be next week.There will be various presentations and tables in the quad area.S. Palladino – Currently looking for a replacement. Luke Hall hasannounced his retirement.A. De la Selva - Counselor Exchange Day will be this Friday. HighSchool counselors will be on campus and will be given informationon how students can register and our various programs. On May19 counselors will be working to follow-up with those students.CompletionTimelineAssignedto:Page 3

Agenda Item Summary of Discussion Action (IfRequired)Discussions/Updates/Presentationsa. Changes in FinancialAid – Alma RodriguezMany changes have occurred in Financial Aid within the last 2years. Alma and Daniel presented the following summary on thesechanges:2011-2012 Banner Financial Aid was implemented. MyVCCCD Debit Card (through Higher One) wasimplemented. Students now have access to their financial aidinformation via the student portal. As of January 24 th 11,039 FAFSA applications have beenreceived. Students have until June 30, 2012 to submit anapplication for the 2011-2012 academic year. A total of $16,063,083 in financial aid has been disbursed.Additional disbursements will take place in March. Changes to the Satisfactory Academic Progress Standards(SAP) have taken place. Students will now be evaluatedon a term by term basis. To receive funding, students canonly repeat a course one time after they have successfullycompleted and passed the same course or its equivalent. The list for eligible programs and primary colleges will beupdated. For any CTE programs, the program cost, graduation ratesand loan indebtedness must be reported. Also, CaliforniaState Licensure Exam Passing rates need to be reported. The student complaint process applies to the entirecollege.Sendpresentation toDCCCompletionTimelineAssignedto:A.RodriguezPage 4

Agenda Item Summary of Discussion Action (IfRequired)Changes in Financial Aid –continued 2012-2013 Changes to the verification process have changed.Students will now need to provide proof if they arereceiving food stamps and/or are paying for child support. The Financial Aid office will no longer be accepting taxdocumentation. Students will need to use the IRS retrievalprocess when filling out their FAFSA. The lifetime Pell Grant eligibility has been cut from 18 fulltime semesters to 12 full time semesters. Effective July 2, 2012, the Ability to Benefit (ATB) willchange to students having to possess a high schooldiploma or its equivalency, GED or be home schooled toreceive federal financial aid. Changes to the Cal Grant GPA are being proposed asfollows:-Cal Grant A: raise GPA from 3.0 to 3.25-Cal Grant B: raise GPA from 2.0 to 2.75-Cal Grant C: raise GPA from 2.4 to 2.75CompletionTimelineAssignedto:Alma stressed the importance of getting faculty to submit theirgrades in on time due to the term by term students will beevaluated on.b. Input on newDepartmentalBrochures – DinaPielaetDina shared the VC program brochure guidelines. She said thatthe idea is to standardize brochures that highlight programs orservices. So far did 24 different brochures have been done forOxnard College. This is to increase community awareness ofevents and attract a higher quality of student. She provided asample brochette for everyone’s review.Email Dina ifyou want abrochettedeveloped.Submit therequestthrough theMarketingRequest(available onthe portalunderEmployeeInformation.CouncilPage 5

Agenda Item Summary of Discussion Action (IfRequired)c. SB1440 Update –Susan BrickerCSU came up with guidelines to do early evaluations on studentsrequesting transfer degrees. Susan said that out of the 41students on the list, 12-14 are legitimate applicants. The deadlineto apply is March 15 th . By then we have to complete an earlyevaluation on these students. We have enlisted the help of GloriaArevalo so she can guide us through in developing forms that weneed to use. We are also working with counseling and Aurora andMarcelino at the Transfer Center and making calls to students.CompletionTimelineAssignedto:d. Library Project –Peter SezziFor the library SLOs we want to speak to some people regardinghaving classes coming to the library for library instruction.e. Spring 2012Enrollment Data andFTES – RamiroSanchezRamiro sent out the latest enrollment data report. We currentlyhave 100 more students than Moorpark.f. Recommendationsfrom StatewideStudent Success TaskForce - CouncilIt was discussed that SB 1452 in student services addresses thematriculation process. If funded, colleges are obligated to meetthe requirements. Ramiro said that he would like for next monthto highlight the ones that are directly impacting us for next year.He asked everyone to check out the State Chancellor’s website forinformation on this. He said it’s something we need to be mindfulof and has direct impact for next year.g. Standardizing CollegeCatalog Narrative –Gloria Arevalo, AlmaRodriguez, SusanBricker, RamiroSanchezRamiro presented this as an information item. All three campusesare working together to standardize the college catalog.h. Update onInstructional MaterialFees – RamiroSanchezRamiro distributed information that came out last week. This willbe presented at the board of governors meeting next week.Email Ramiro ifyou have anyquestions.CouncilPage 6