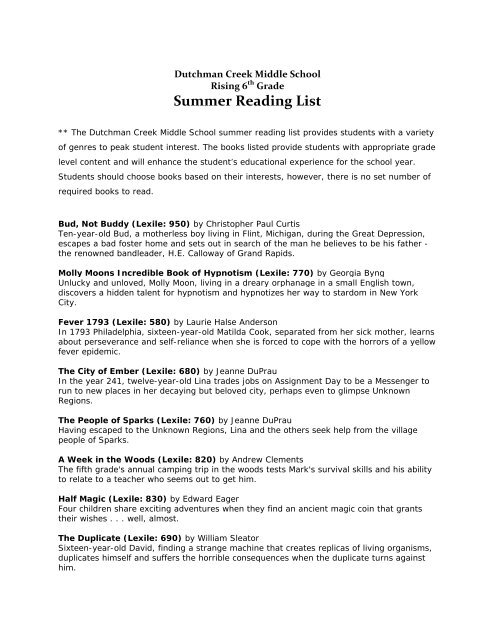 Woodsong (Lexile: 1090) by Gary PaulsenFor a rugged outdoor man and his family, life in northern Minnesota is a wild experienceinvolving wolves, deer, and the sled dogs that make their way of life possible. Thisautobiography includes an account of the beloved author's first Iditarod, a dogsled raceacross Alaska.Joey Pigza Swallowed the Key **and series** (Lexile: 970) by Jack GantosTo the constant disappointment of his mother and his teachers, Joey has trouble payingattention or controlling his mood swings when his prescription wears off and he startsgetting worked up and acting wired.The Man in the Ceiling (Lexile: 820) by Jules FeifferJimmy Jibbett tries - against his own better judgment - to excel as an artist, a cartoonist tobe specific. His workaholic dad would rather he were good at sports; his mom is prettymuch too involved in her work to notice. Feiffer's humor will appeal to Roald Dahl fans.Millicent Min: Girl Genius (Lexile: 800) by Lisa YeeIn a series of journal entries, 11-year-old child prodigy Millicent records her struggles tolearn to play volleyball, tutor her enemy, deal with her grandmother's departure, and makefriends over the course of a tumultuous summer.Baseball in April and Other Stories (Lexile: 830) by Gary SotoEleven tales about everyday problems of growing up: the main characters try out for LittleLeague, take karate lessons, and get embarrassed by their grandparents' behavior...Guts: the true stories behind Hatchet and the Brian Books (Lexile: 1230) by GaryPaulsenThe author relates incidents in his life and how they inspired parts of his books about thecharacter, Brian Robeson.Eagle Strike (Lexile: 690) by Anthony HorowitzIn this fourth installment of the Alex Rider Adventures, Alex finally breaks off from thecontrol of MI6, the British Intelligence and acts on his own. He investigates and attempts tofoil the plot of Damian Cray, world renowned pop star. Even more thrilling than the firstthree titles (STORMBREAKER, POINT BLANK, and SKELETON KEY,) this book also takes anemotional turn when Alex finds out more information about his father who died long ago.Midnight for Charlie Bone and Charlie Bone and the Time Twister (Lexile: 630) byJenny NimmoIn Midnight for Charlie Bone, readers will meet Charlie Bone, who is 11 and has a specialtalent. He can look at a photo and "hear" what happened when the picture was taken. Afterdiscovering his magical talent, Charlie encounters some strange people and circumstancesand finally has to face down his adversery in a final battle at his new witchcraft school. Theseries is called Children of the Red King.

Eragon (Lexile: 710) by Christopher PaoliniAt the beginning of the story, fifteen-year-old farm boy Eragon encounters magic andmagical objects and quickly realizes that he is a gifted Dragon Rider. He takes on thedangerous and exciting task in fighting the evil powers that will destroy his Empire. This isBook 1 in the Inheritance series. The second book will NOT be published until Summer2005!East (Lexile: 900) by Edith PattouIn this retelling of a Scandinavian folk tale "East of the Sun, West of the Moon" Rose savesher sister’s life and the family fortune by agreeing to go and live far away with the whitebear, in his wonderous cave. There are several narrators of this story -- Rose, The WhiteBear, Rose's Father, The Troll Queen, and Rose's Brother. The reader pieces together arichly detailed, moving, imaginative story that is full of actions and thrilling adventures.What Jamie Saw (Lexile: 1010) by Carolyn CormanJamie's mother takes him and his baby sister to live in a tiny trailer in the New Hampshirewoods when his stepfather's behavior becomes dangerously abusive. Jamie finds himselfliving an existence full of uncertainty and fear.