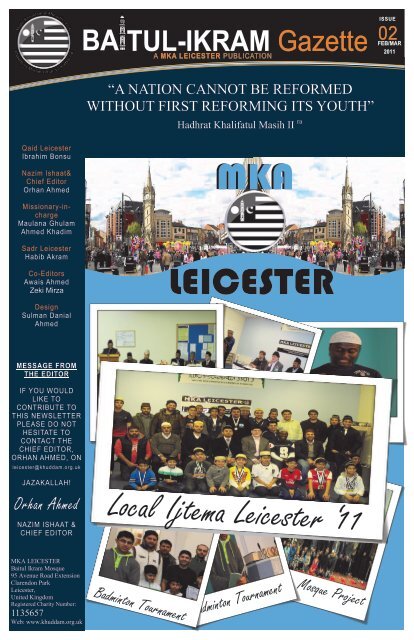 “A NATION CANNOT BE REFORMED

WITHOUT FIRST REFORMING ITS YOUTH”

Writings of the Promised Messiah as

Hudhur gave a discourse on ‘Khaira Ummah’ (best people) and the

him) in his Friday Sermon today. He cited the Quranic verse: ‘You are

the best people raised for the good of

mankind; you enjoin what is good and

forbid evil and believe in Allah. And if

the People of the Book had believed, it

would have surely been better for

them. Some of them are believers, but

most of them are disobedient.’

of this verse requires repeated

reminding and this is why he has given

discourses on it before. In it God

had given a huge responsibility to those who believe, safeguard and

strengthen their own belief as well as that of their next generation,

of God. In the current time, these are believers, who have accepted the

Imam of the age, who is the true and ardent devotee of the Holy

Prophet (peace and blessings of Allah be on him). Just as the early

Muslims kept the Quranic commandments and pronouncements of the

in this, in the current age, this is the obligation of Ahmadis.

To read the full summary of this Friday sermon then please visit:

News of the Month

29 th and 30 th January was a success. The preparation towards the Ijtema

to decide on concrete plans to hold the event. Various tasks were allocated

to specific departments to see to the organisation.

Conveying the information about the Ijtema was the responsibility of

all the Majlis-e-Amila members, and it took in the form of text messages,

phone calls, emails and personal visits to some members by

Qaid Majlis- Ibrahim Bonsu. Announcements were made at all

Registration on the 29 th January started at 4.30pm with the Opening

Afaq Baig Sahib and translation by Munam Khadim Sahib. Hadith by Mubarek Ahmed Sahib and sayings of the

by Noman Mustafa Sahib and Tarbiyyat points by Sadr Jama’at-Dr.

using the Halqa system made up of Amanat, Dianat, Rafaqat and Sadaqat.

Speech commenced at 2.15pm. Alhamdulillah we were privileged on the second day of the Ijtema to have

The climax of the academics was the extempore speech competition which turned out to be great fun.. Altogether

the level of performance in the academics was very high, both Khuddam and Atfal. The academics finished at

The closing session of the Ijtema began at 5.15pm with recitation of the Holy Qur’an by Abrar Baig Sahib. It was

followed by the pledge and then Hadith by Munam Khadim Sahib. Sayings of the Promised Messiah (as) by Awais

Ahmed Sahib and Nazm by Mubarek Ahmed Sahib. The Ijtema report was then given by Motamid-Noman Mustafa

Sahib and was followed by the prize distribution. The Best Halqa-Ijtema 2011 went to Halqa Dianat, this was on the

basis of performance and attendance.

spoke on the challenges and responsibilities of Khuddam within the society. Qaid Majlis, Ibrahim Bonsu, then gave

a message of thanks to the guests, judges, organisers and all the participants. The Ijtema finally ended with a silent

Insha’Allah we look forward to improve upon this number next year. All praise belongs to Allah Almighty for

making this Ijtema a success.

Alhamdulillah , the Leicester Mosque project is making good progress. The ground surveys have been

done and look favourable. The structural surveys and plans are being drawn up. These have to be meticulously

accurate as every inch of space next door will be built on, so there is no margin for error. We

have to be right first time.

or pillars. Also, we want a large dome in the upstairs mosque to let the natural light flood in. The issue

is the current ceiling is made of steel beams and breezeblocks! Once the steel survey is complete, we

will tender the work out to local builders to demolish the site, secure foundations and erect the

steelwork/ block work. The Jama’at workers will then come and finish off the plastering, plumbing,

2011. The majority of the local Jama’at was present and Amir Sahib gave a very promising and encouraging

talk about the prospects of completing the Leicester Mosque this year. Insha’Allah.

This leaves a balance of £300,000, the majority of which has to be raised by Leicester Jama’at.

I hope you like the thermometer I made and placed in the hall downstairs. This should help us to clearly

see how far we are from our target. To date we have promises locally for about £208,000 of which

There are currently three mosque projects running in the Midlands; Leicester, Walsall and Wolverhampton.

With the help of the other Jama’ats in the Midlands excluding Walsall and Wolverhampton,

make regular monthly payments so that our collections continue to increase steadily. Please do not

I pray that may Allah help us in our noble aims. May He bless our sacrifices abundantly, so much so

that our donation boxes become overflowed.

Founded in 1889, it spans over 195 countries with membership exceeding tens of millions. Its current

headquarters are in the United Kingdom.

Ahmadiyya Muslim Community is the only Islamic organization to

the metaphorical second coming of Jesus(as) of Nazareth and the

divine guide, whose advent was foretold by the Prophet of Islam,

has brought about an unprecedented era of Islamic revival. He divested Islam of fanatical beliefs and practices

by vigorously championing Islam’s true and essential teachings. He also recognized the noble teachings of

(as), Buddha(as), Confucius(as), Lao Tzu and Guru Nanak, and explained how such teachings converged into

the one true Islam.

form. Over a century ago, Ahmad(as) emphatically declared that an aggressive “jihad by the sword” has no

place in Islam. In its place, he taught his followers to wage a bloodless, intellectual “jihad of the pen” to defend

Islam. To this end, Ahmad(as) penned over 80 books and tens of thousands of letters, delivered hundreds

of lectures, and engaged in scores of public debates. His rigorous and rational defenses of Islam unsettled

Similarly, it is the only Islamic organization to endorse a separation of mosque and state. Over a century ago,

righteous souls as well as loyal citizens. He cautioned against irrational interpretations of Quranic

pronouncements and misapplications of Islamic law. He continually voiced his concerns over protecting the

rights of God’s creatures. Today, it continues to be an advocate for universal human rights and protections for

religious and other minorities. It champions the empowerment and education of women. Its members are

among the most law-abiding, educated, and engaged Muslims in the world.

Ahmadiyya Muslim Community is the foremost Islamic organization with a central spiritual leader. Over a

century ago, Ahmad(as) reminded his followers of God’s promise to safeguard the message of Islam through

Khilafat (the spiritual institution of successor ship to prophet hood). It believes that only spiritual successor

since his demise in 1908. It’s fifth and current spiritual head, Hazrat Mirza Masroor Ahmad, resides in the

United Kingdom. Under the leadership of its spiritual successors, Ahmadiyya Muslim Community has now

built over 15,000 mosques, over 500 schools, and over 30 hospitals. It has translated the Holy Quran into over

60 languages. It propagates the true teachings of Islam and the message of peace and tolerance through a

Publications). It has been at the forefront of worldwide disaster relief through an independent charitable

BOOKS OF THE PROMISED MESSIAH (AS)

correspondence between Hadhrat Ahmad, peace be on him, and some Arya Samajists.

that, for that also was connected with the article. But these writings

were collected and published by a great disciple of Hadhrat

Ahmad (as) in 1899. The article and the correspondence make

1. The falsification of the theory of transmigration and comparison

between the Holy Qur'an and the Vedas (the sacred scripture

of the Hindus). The logical proofs based on the teachings

of the Holy Qur'an, of the fact that God is and He ought to be

the Creator of all that is there.

2. The facts about revelation, its need, and the proofs that revelation really

3. The falsification of the Arya ideology of the souls being eternal for ever to ever-and

asked Hadhrat Ahmad for a discussion on some religious points. The discussion did take

place but it was not very fruitful, for Mr. Singh left abruptly. After he left, Hadhrat Ahmad

which he had read at the public meeting held at the request of Mr. Singh. He asked all of

was valid with this article as well. A correspondence ensued. There were two letters from

Shiv Narain and one from Bawa Narain Singh (this letter is not included in the booklet).

It was published in a magazine called Aftab on 18th February, 1879. All the letters were

replied to by Hadhrat Ahmad, peace be on him.

11 members of MKA Leicester held bucket collections at the Highcross

Shopping Mall on the 26 th February, 2011, to raise money for Children’s Charity

Challenge in which the Midlands region would be the proud host on May 8 th , 2011,

Service to humanity is the religious duty of every Muslim. Islam urges its followers

of their age, gender, race and religion. We therefore pray for Allah Almighty to

continue to grant us strength and enthusiasm towards this Jihad.

Jazakallah to all the participants.

This month we are going to talk about the new Blackberry Torch 9800!

The classic BlackBerry has a landscape screen

BlackBerry Bold 9700. But rather than stick with

the landscape look for its new touchscreen Torch,

RIM has opted for tall and thin instead. The

keyboard slides out from below the screen the

long way, which makes it narrower than it has to

be. It also makes the phone feel top-heavy when

you slide it open. Indeed, the Torch feels bulky,

The keyboard itself is okay to use, but we don't love it quite as much as the one on the Bold

9700. That's because it's got a lip around it that hindered our thumbs, and the keys didn't have

the firm response that we like. But we still enjoyed typing long missives on the physical keyboard.

the slider. We had no trouble tapping out accurate messages, and the predictive text was

helpful when we made mistakes. We also liked the built-in spell checker and the cursor,

1.Question: What is the only thing you can break when you say its

2. Question: There were two ducks in front of a duck and two ducks

behind a duck, and one duck in the middle. How many ducks were

JOKE OF THE MONTH

Doctor, Doctor I keep thinking there is two of me

One at a time please

Contribute your jokes, the best joke will be published, along with

your picture and Name in the next issue!

Dates for your Diary

Dates for your Diary

Events for the Whole Jama’at

EVERY FRIDAY IS SALAAT AWARENESS DAY!