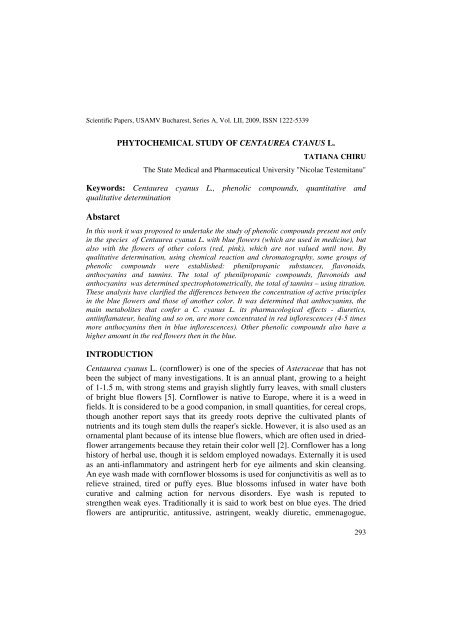 Scientific Papers, USAMV Bucharest, Series A, Vol. LII, 2009, ISSN 1222-5339PHYTOCHEMICAL STUDY OF CENTAUREA CYANUS L.TATIANA CHIRUThe State Medical and Pharmaceutical University "Nicolae Testemitanu"Keywords: Centaurea cyanus L., phenolic compounds, quantitative andqualitative determinationAbstarctIn this work it was proposed to undertake the study of phenolic compounds present not onlyin the species of Centaurea cyanus L. with blue flowers (which are used in medicine), butalso with the flowers of other colors (red, pink), which are not valued until now. Byqualitative determination, using chemical reaction and chromatography, some groups ofphenolic compounds were established: phenilpropanic substances, flavonoids,anthocyanins and tannins. The total of phenilpropanic compounds, flavonoids andanthocyanins was determined spectrophotometrically, the total of tannins – using titration.These analysis have clarified the differences between the concentration of active principlesin the blue flowers and those of another color. It was determined that anthocyanins, themain metabolites that confer a C. cyanus L. its pharmacological effects - diuretics,antiinflamateur, healing and so on, are more concentrated in red inflorescences (4-5 timesmore anthocyanins then in blue inflorescences). Other phenolic compounds also have ahigher amount in the red flowers then in the blue.INTRODUCTIONCentaurea cyanus L. (cornflower) is one of the species of Asteraceae that has notbeen the subject of many investigations. It is an annual plant, growing to a heightof 1-1.5 m, with strong stems and grayish slightly furry leaves, with small clustersof bright blue flowers [5]. Cornflower is native to Europe, where it is a weed infields. It is considered to be a good companion, in small quantities, for cereal crops,though another report says that its greedy roots deprive the cultivated plants ofnutrients and its tough stem dulls the reaper's sickle. However, it is also used as anornamental plant because of its intense blue flowers, which are often used in driedflowerarrangements because they retain their color well [2]. Cornflower has a longhistory of herbal use, though it is seldom employed nowadays. Externally it is usedas an anti-inflammatory and astringent herb for eye ailments and skin cleansing.An eye wash made with cornflower blossoms is used for conjunctivitis as well as torelieve strained, tired or puffy eyes. Blue blossoms infused in water have bothcurative and calming action for nervous disorders. Eye wash is reputed tostrengthen weak eyes. Traditionally it is said to work best on blue eyes. The driedflowers are antipruritic, antitussive, astringent, weakly diuretic, emmenagogue,293

ophthalmic, very mildly purgative, and tonic. An infusion can be used in thetreatment of dropsy, constipation, or as a mouthwash for ulcers and bleeding gums.This infusion is also taken as a bitter tonic and stimulant, improving the digestionand possibly supporting the liver as well as improving resistance to infections.Water distilled from the marginal flowers was formerly in repute as a remedy forweak eyes and a soothing lotion for conjunctivitis. The seeds are used as a mildlaxative for children. Cornflower leaves are used to create a cleansing facial steamfor dry sensitive skin. A decoction of the leaves is antirheumatic. These effects aredetermined by the presence of the phenolic compounds (flavonoids, tannins, caffeicand chlorogenic acids), which are very poorly studied in C. cyanus L. [9].Phenolic compounds are ubiquitous constituents of higher plants found in a widerange of commonly consumed plant foods such as fruits, vegetables, cereals andlegumes. They are diverse in structure but are characterized by hydroxylatedaromatic rings. These compounds are secondary metabolites of plants generallyinvolved in defense against ultraviolet radiation or aggression by pathogens. Theyhave been the subject of a great number of chemical, biological, agricultural andmedical studies. Plant phenolics have received considerable attention because oftheir potential antioxidant activity as well as hepatoprotective, hypoglycemic andantiviral activities. Human consumption of antioxidants has many alleged healthbenefits, including protection against cardiovascular diseases, and, most recently,cancer [1, 4]. Therefore the studies of the plants, which are sources of phenoliccompounds represent a great actuality.MATERIAL AND METHODSPlant materials (aerial parts, inflorescences, marginal and disc flowers) werecollected during the flowering period from the South of Basarabia in June, 2008.After powdering, these materials have been exposed to physico-chemical analysis.The phenilpropanic compounds were identified by thin-layer chromatography [7].1 g of plant material was extracted by refluxing with 10 ml methanol andconcentrated to 4 ml. Operating conditions were as follows:• mobile phase: ethyl acetate–acetic acid–formic acid–water (100:11:11:26);294• stationary phase: silica gel plate;• etalon solutions: caffeic and chlorogenic acids;• identification in visible and UV specter.The total of the phenilpropanic compounds in blue and purple inflorescences, inaerial parts with blue an purple inflorescences of C. cyanus L., was determinedusing spectrophotometric analysis, at 500 nm wavelength (caffeic acid as referencesubstance) [7]: 4.0000 g powdered plant material with 80 ml ethylic alcohol 50% isput in a bottle, weighted and extracted in reflux during 30 min. After cooling, thebottle is restored to the initial weight with ethylic alcohol 50% and filtrated

(solution A). 5 ml of solution A is diluted in a 50 ml marked bottle with ethanol50%. To 1 ml of this solution are added: 1 ml chlorhydric acid 0.5 n, 1 ml Arnowreactive, 1 ml NaOH 1 n and it’s filled with water till the 10 ml mark in a markedbottle (resulting a red solution). After 10 min the absorbance is determined incomparison with the following solution: 0.5 ml solution A, 1 ml HCl 0.5 n, 1 mlNaOH 1 n and water till 10 ml mark.For the quantitative determination of tannins (in aerial parts and blueinflorescences), was employed the titrimetric method [3], based on its oxidationwith potassium permanganate: 2 g of plant materials with 50 ml boiling water arewarmed up. After 30 min the solution is filtrated in a bottle with 250 ml volume.The extraction is repeated until tannins reaction (with ferric alum) is negative. Thebottle containing the cold solution is filled with water to the marked level (250 ml)and is transferred in a 1 l bottle, 750 ml water and 25 ml acid indigosulphonicsolution are added. Then it is titrated with potassium permanganate 0.1 n until thesolution becomes yellow. Similarly the control probe (25 ml indigosulphonic acidin 750 ml water) is titrated. The total quantity of tannins is calculated using theformula:( V1−V2) K ⋅ D ⋅V⋅100⋅100x =mV 100 − ω3( )V 1 – used volume of potassium permanganate 0.1 n, ml; V 2 – used volume ofpotassium permanganate 0.1 n for the titration of the control probe, ml; K – thecorrection to the titer (via oxalic acid); D – the coefficient of tannin; V – the totalvolume of the extract, ml; m – the exact mass of plant material, g; V 3 – volume ofextract used for titration, ml.RESULTS AND DISCUSSIONBy qualitative determination, using chemical reaction and chromatography, somegroups of phenolic compounds were established: phenilpropanic substances [7],flavonoids [6, 10], anthocyanins [6, 8] and tannins [3] (reaction with ferric alumproves that tannins are condensated). The caffeic and chlorogenic acids weredetermined qualitatively in blue and purple inflorescences, in aerial parts with bluean purple inflorescences of C. cyanus L., using thin–layer chromatography.The results of quantitative analysis, obtained in our actual and previous studies [6],are listed in table 1.In the scientific medicine only the blue flowers of C. cyanus L., but not othersexemplars (with purple, pink or white inflorescences), are employed. Strikingly,these exemplars generally are ignored and not studied, their unique utilization is asornamental plants. According to our investigations in the purple flowers the contentof active agents is higher than their level in the blue flowers (table 1). In this case295 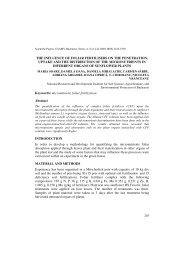 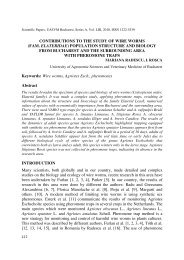 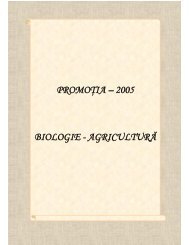 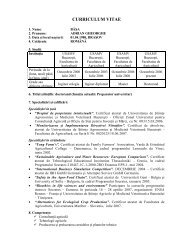 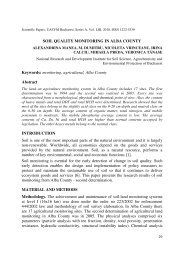 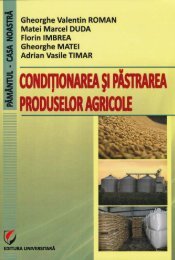 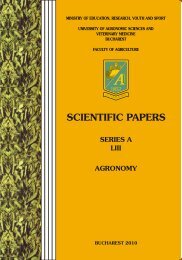 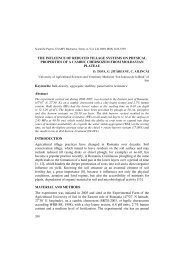 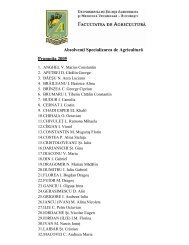 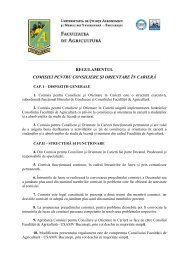 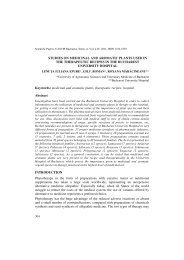 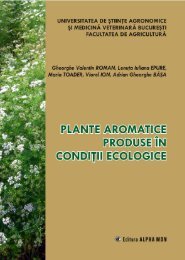 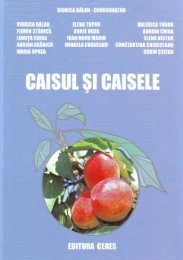 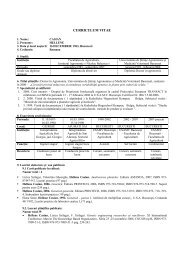 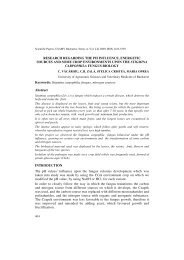