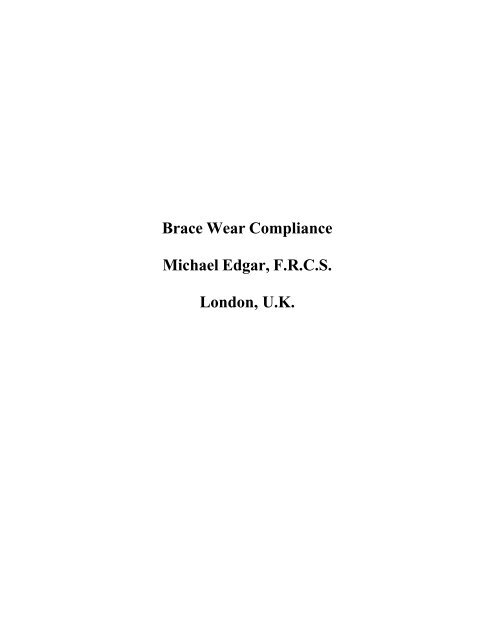 SRS BRACE MANUALCOMPLIANCE IN BRACE WEARINGIntroductionBracewear is the only proven means of conservative management in adolescent idiopathic scoliosis 10 .The 3 essentials 6 of good bracing are:-1) a mobile, mild idiopathic curve that radiologically corrects well in the brace 11,12,132) a competent fully trained orthotist using a well designed brace3) a compliant patient.Undoubtedly compliance is the cinderella among the conditions to achieve successful bracing as it remainsdifficult to measure. It is usually taken for granted that the report of the patient and the parents as to how manyhours per day the brace is worn is a reliable figure. Generally speaking those patients who confess to noncompliancetend to have worse results from bracing 15 . However as it is such a key area in which to haveaccurate information, it is surprising that techniques to measure bracewear accurately, such as brace timers, arenot in routine use. It goes without saying that the time , expense and efforts of a skilled orthotist are totallywasted if the patient fails to wear the brace. Furthermore if the patient is not wearing the brace the reasons needto be investigated particularly as psychological upset can be a factor for low compliance and clearly in such acase a sympathetic approach is needed 16 .Brace TimersIn 1986 Houghton 19 presented the findings of a pressure activated timer concealed in the rib pad. The theorywas that the clock started as soon as the brace was put on because of pad pressure. Similarly when it was takenoff the clock recording ceased. The accumulated clock time was then read and divided by the number of daysthe brace was worn. Houghton’s report to the SRS involved 30 patients monitored over 3 months. They allindicated poor compliance with the average daily bracewear being only about 3 hours. In London we tried usingthis timer but found it to be unreliable particularly if the child loosened the brace or bent forward reducing the

pad pressure. It was very easy for the pressure to drop below the critical point even with the brace on. Thereforethe accumulated time on the clock was significantly lower then the time that the brace had been on. For thisreason we abandoned the pressure timer. Since then another study 20 has also demonstrated that even with thepatient under constant supervision in the hospital during the initial period of bracing the compliance isnotoriously lower than prescribed. In the study quoted non-compliance was 38%. Therefore compliance in bracepatients is still under suspicion.The London Brace TimerThe current brace timer was developed in 1989 at the Medical Physics and Bio-Engineering Department atUniversity College London and then evaluated over a trial period in the Scoliosis Brace Clinic at the RoyalNational Orthopaedic Hospital, London. The London Timer consisted of a standard digital watch mechanismconnected to a temperature sensing switch set to turn on when the ambient temperature went above 30° C.Similarly if the temperature dropped below 30° C the system switched off. The clock and switch measures2.5cms squared x 1.5 cms and is easily concealed within the polystyrene pad of the brace.The StudyThirty three AIS patients with progressive curves of between 20° and 39° were braced using the RNOHmodified Boston TLSO. Within the brace pad of each of the 33 braces a concealed brace timer was installed.Preliminary studies had confirmed the accuracy of the switch. To obtain the brace time per day the total clocktime was measured at the clinic and the number of days elapsing from the last attendance was divided into thetotal clock time. The patient and their parents were not informed about the timer and in only one instance wascomment made about the device as revealed on the in-brace X-ray.Patients attending the Scoliosis Brace Clinic followed a set protocol. After fitting of the brace an erect APspinal radiograph was taken in the brace and the Cobb angle was noted. This angle was compared with themaximum Cobb angle out of the brace. The patient was recommended to wear the brace 20 hours per day. Itwas stressed that the 4 hours out of the brace was as important as the 20 hours in it and that the time out of the

ace should be used for recreation, sporting activities, etc. The patients were followed up 4-monthly. On theday of the appointment the patients were asked to take their brace off at the beginning of the day so at least 4hours elapsed before the erect AP radiograph out of the brace was taken. After this the patient saw the clinician.This followed the protocol of the SRS brace trial 7 . Once the patient had reached Risser sign 4, brace wear wasreduced to nighttime for a period of one year. Compliance was then measured against a 10 hour every daynorm.Each patient contributed to between 2 and 11 readings of the timer. Of the 33 patients, 25 have been out of thebrace for one year. Two have progressed to surgery. All the braces were fitted by one orthotist who fullycooperated with the study and was responsible for playing the clock back at each attendance to register the totalnumber of hours.ResultsThe concealed brace timer showed a range of recordings of bracewear per day of 0.4 hours to 23 hours over aperiod that ranged from 4 months to 3 years. The following factors were analysed :-1) Cobb Angle Correction in the Most Compliant PatientThe 8 most compliant patients who wore the brace over a period of 3 years were recorded as having worn thebrace from between 14 and 19 hours per day. In this group the Cobb angle showed a mean correction of 12.7%with a mean reduction of the Cobb angle from 32° to 27°. The finding of these 8 most compliant patients aresignificantly different from the remaining group.2) Correlation of Curve Correction with Brace ComplianceA significant change of curve was defined as increase or reduction of the Cobb angle by at least 6° at 2consecutive visits over a 12 month period (this followed the pattern adopted by the SRS trial). Eight patientsshowed reduction of the scoliosis. Mean bracewear in this group was 15.9 hours per day. Twelve patientsshowed no overall change in the scoliosis Cobb angle. The mean bracewear in this group was 12 hours per day.

Thirteen patients showed a definite deterioration in the Cobb angle. The mean bracewear for these was 9.7hours per day.3) Pattern of Brace Compliancea) During the first 4 months bracewear was consistently less than the recommended time,approximately 10 hours per day. This represented the initial stage when the child was becomingaccustomed to the brace and clearly tolerance was not up to the full recommended 20 hours.b) The second period, that is from 4 to 8 months after the brace was fitted, usually demonstrated thebest compliance reading.c) The following factors were found as the pattern of compliance was assessed :-i) Brace hours per day was significantly reduced during the summer months due to the hotweather,ii)After 5-6 visits, that is after 2 years, the number of hours per day the brace was wornslowly declined,iii)Brace compliance was related to menarchal status. Compliance was found to be muchbetter in girls who had not yet reached the menarche.4) Clinical Judgment of ComplianceIn 24 patients the clinician recorded his own judgment as to whether the patient was compliant or not.Considerations included:-a) the ease with which the brace was donned and taken off without help at the clinic,

) skin makings eg erythema and pigmentation in relation to the rib pad,c) wear and tear of the brace,d) general attitude of the patient and whether there was support of the attending parent.The brace timer indicated that the clinician’s judgment of compliance was wrong in 7 of the 24 of the cases, thatis 29%.ConclusionsThe current findings show that compliance in bracewear is a significant factor in achieving a successful result.The most compliant brace wearers appeared to achieve the best results and the best curve corrections occur inthose who wear the brace for the greatest time each day. However even the most compliant patients haverecordings which range between 14 and 19 hours. Nobody achieved a consistent 20 hours. If the patient isrecommended to wear the brace for between 12 and 16 hours a day rather than 20 hours this might be a moreattainable goal and may result in more compliance. In fact 16 hours a day may be the optimum value as abalance between effectiveness of brace correction and tolerance of bracewear.Studies with part-time bracing between 12 and 16 hours per day interestingly do not show inferior resultscompared with the 20 hour regime 14, 15 . Against this a meta-analysis of bracewear shows that, in regard to theMilwaukee brace, the most consistently successful results were those where the bracing had been recommendedfor 23 hours each day 9 . However there have been no brace timer studies to assess whether that actually wasachievable. The question centres on whether a patient who is instructed to wear the brace for 20 or 23 hours aday is more likely to achieve what might be seen as the essential 16 or 18 hours whereas if he or she is onlyrecommended 16 hours a day an accurate record may show that the brace is on for only 10 or 12 hours per day.Those studies which have thrown doubt on the ability for the TLSO or Milwaukee Brace to control progressionmay need to be re-assessed as to whether poor compliance was a major factor in brace failure 2,3 . Again it issurprising that many of the longterm reviews do not consider compliance 4,5,8 .

Further DevelopmentsTo put a timer in every brace would add to the expense of the orthosis and is probably not necessary. The mostvaluable period is the first 8 months of bracewear when the compliance will be evident. This finding togetherwith the correctibility of the curve in the brace can help the clinician to decide whether bracewear is worthpersisting with it all. Such a decision would need to be discussed openly with patient and parents as persistencewith such a treatment would only be a deception.If the brace timer suggests that for climatic or psychological reasons the brace is only being worn for part of thetime probably at night then it would be a realistic option to use the Charleston bending brace as perhaps themost effective night orthosis 17,18 . 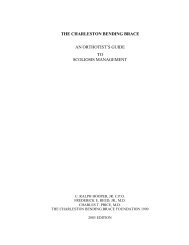 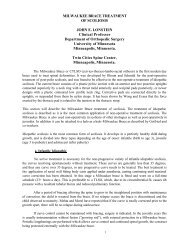 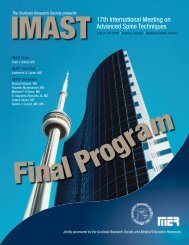 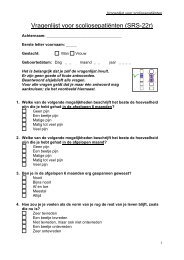 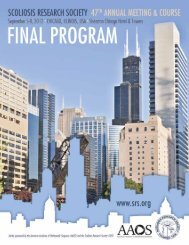 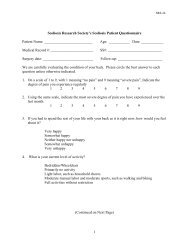 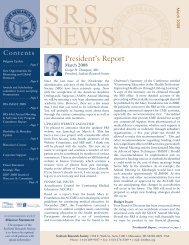 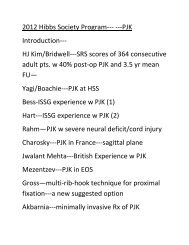 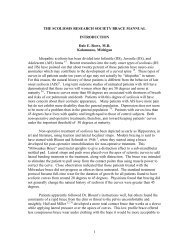 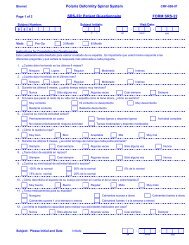 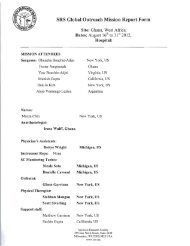 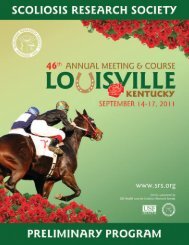 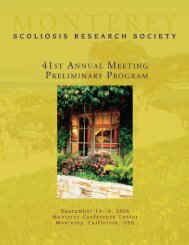 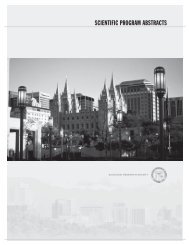 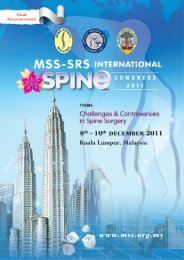 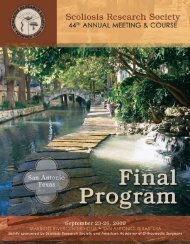 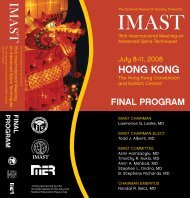 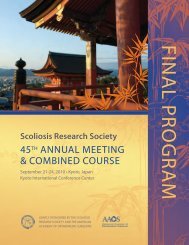 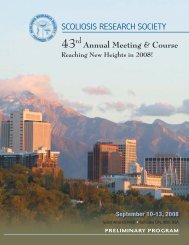 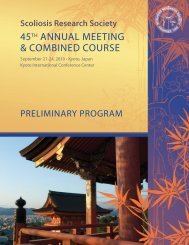 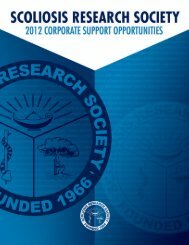 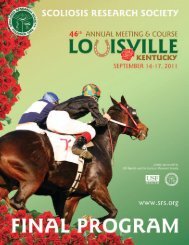 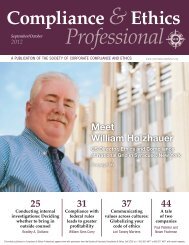 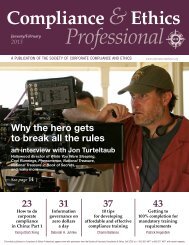 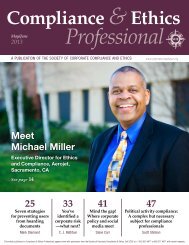